The Old Entrance at Beaumont Park

So it seems, referring back to my previous post, that I wasn't just suffering from post-holiday blues and I've had a week off work with viral pleurisy.  It's where the lining between the lungs and the chest wall (pleura) get inflamed and it is extremely painful to breathe. Anyway I'm back at work and although not completely at full health I am well on the mend.
On the day before I went back to work I decided to venture out for a walk to see how I managed to get about and I was OK but took it very steady.  Anyone who may have been to Beaumont Park (or read my post from the 6th June last year) will know it's perched on a steep hillside with many sloping paths and steps, perhaps not the best place to go when it's hard to breathe.  The original main entrance was at the bottom of the park and the visitors used to arrive on the railway and enter the park through the beautiful gates under the bridge.  It guess it was more like entering the grounds of a castle than a park and I would think that it would have been very busy at the weekends in the summer from the early 19th Century until after the Second World War.  I imagine that people would have been dressed in their best Sunday clothes to promenade around the many paths, past the water cascade and up to the bandstand at the top of the park.  The railway line has long since been abandoned and the main entrance is now at the top end of the park.
The bridge over the entrance has been closed for a while with red and white tape preventing access and spoiling the view somewhat. I was so pleased when I walked down the steps towards the old entrance to see that it has been re-opened and the tape has gone.  This first photo is as I approached the entrance using my fisheye lens attachment on my Lensbaby Composer.  Everything is a bit overgrown down here so it feels a bit like descending into a abandoned fort down a canyon within a tropical rainforest. 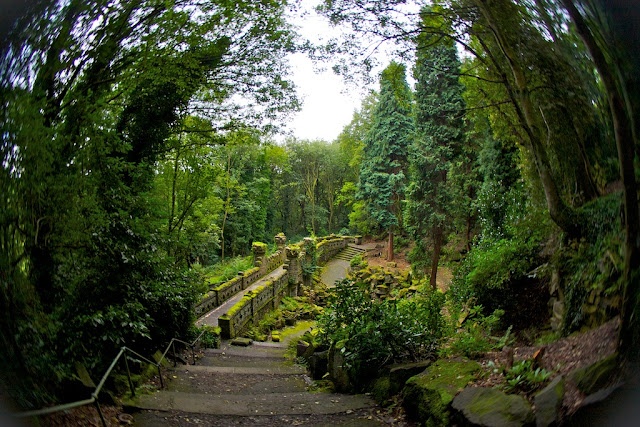 On the bridge the old stonework is overgrown with moss and ivy and some of the bits of stone look as if they've been dropped here from somewhere else.  This next photo was three shots taken with a 50mm lens at different exposures and tonemapped to bring out the rich detail in the stonework. 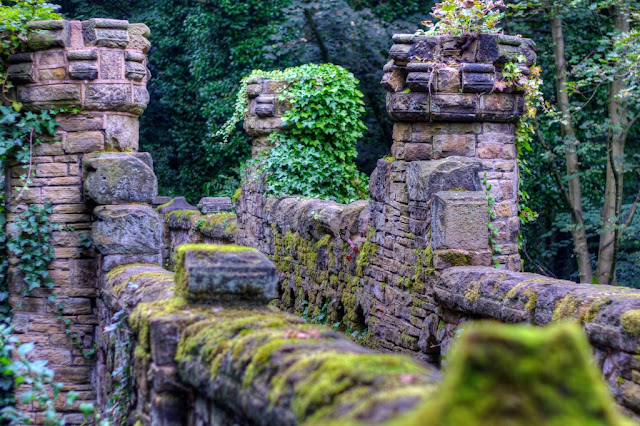 At the other end of the bridge there are step up to where the original cascade used to flow under a little bridge down a fifty foot cliff face and into a deep pool.  In the centre background of this photo you might be able to make out apart of the cliff face.  This photo and the next two were also taken using the fisheye because I wanted to get the very wide angle shots and I quite like the distortion around the edges. 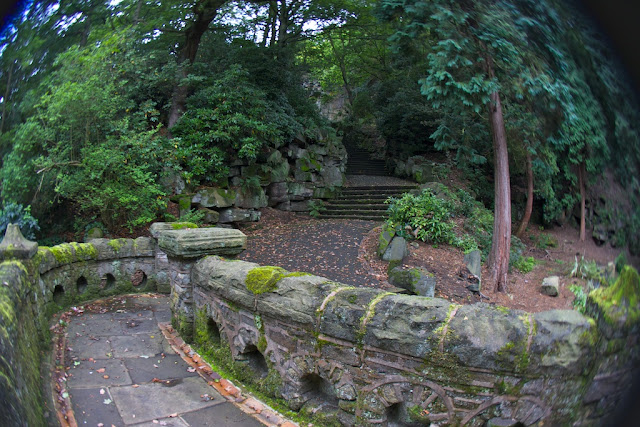 This next shot is looking out through the main entrance under the bridge.  The stonework here is very impressive and I would think that without the moss and ivy could look even better.  I had one gate open and one shut for this shot.  I experimented with them both open and both shut but in the end I preferred this shot (mainly because it was in focus, the Lensbaby has to be focused manually and with my eyes it can be a bit hit and miss whether anything is in focus).  Through the gate you might be able to make out the iron girder which is where the railway line goes over the path into the park.  It's all very overgrown out there now so I'm not sure whether there was another path from the old railway station which is a couple of hundred yards down the track. 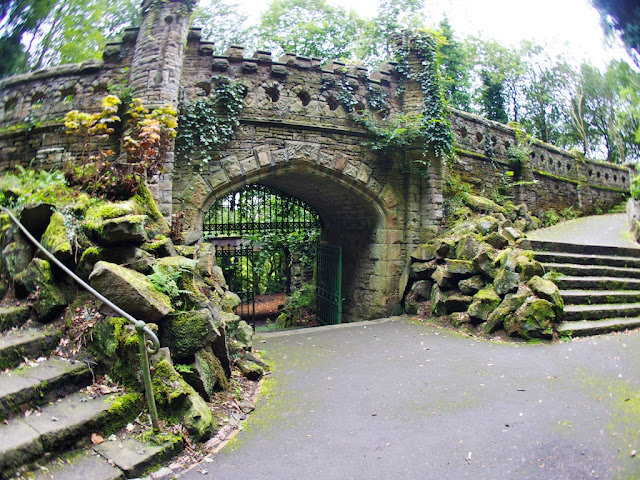 This shot was taken from the old railway bridge and looking into the entrance.  From here you can get a better idea of how overgrown it is with the ivy and bits of trees everywhere.  I imagine that in its heyday this area would all have been kept very trimmed and clear of ivy.  I'm not sure whether it shows up on this photo but the stones on which the gates are hung have been replaced with nice newly carved stones.  The workmanship is good and matches the original stonework very well apart from being clean.  I guess it won't take long for them to weather and merge into the old stonework better.  Behind me there are more trees towering above the old railway line and it is quite dark down here even on the brightest days. 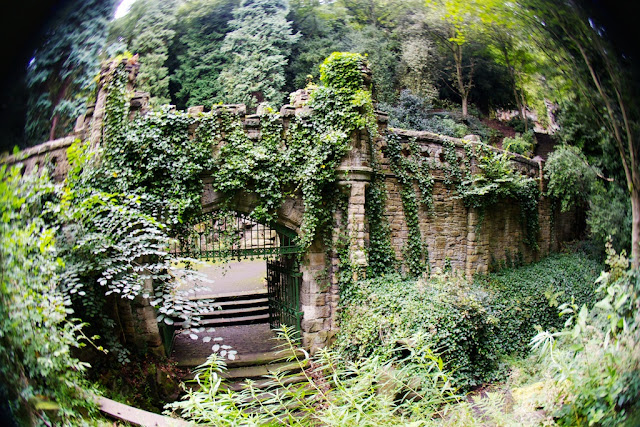 I had probably spent a good half to three quarters of an hour down here taking photos and opening and closing the gates so I think I had exhausted the subject for today.  Next time I come here I might take some closer up shots to capture more of the detail in the stonework.  I took this final shot of the entrance as I started up the path towards the site of the old cascade.  I included the old bit of stone in the foreground to add a bit of depth to the shot. 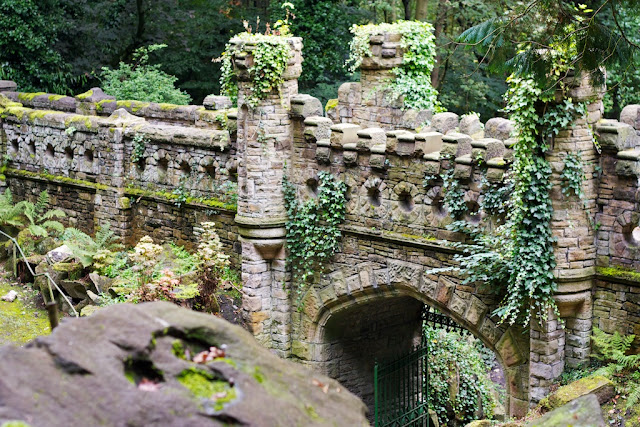 I wasn't going to include this last shot in the post but as I've mentioned the old cascade a couple of times I decided to add this one.  In the foreground are the steps coming up from the old entrance and in the top right corner you can see the little bridge where the water for the cascade used to come down.  I imagine that when the cascade was in full flow this would have been quite a spectacle.  The pool no longer exists  and has been filled in for safety I would think.  A new cascade has been made near the top of the park with a pond and a fountain (see my post 06/07/09) but I don't think it's as impressive as this old one would have been.  However I shouldn't complain as they making improvements to the park every time I come back to see it.  I don't suppose it will ever be as popular as it used to be but I quite like the old abandoned areas as much as the newly refurbished ones because there are so may photo opportunities here.  I have a few more photos from the day (fungi, flowers and butterflies) and I might post them later. 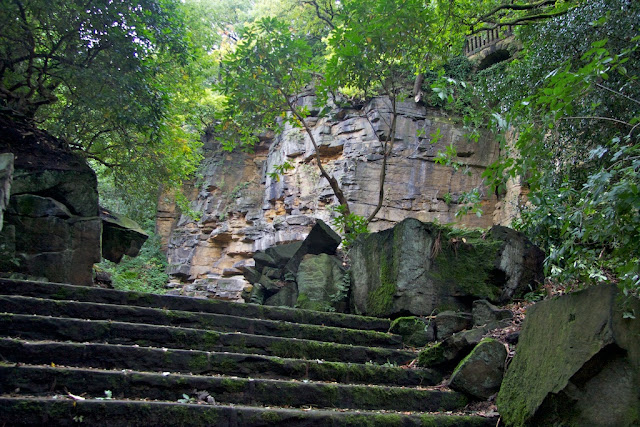