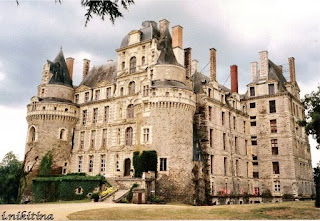 On Sunday we went to the Comme Dans l'Temps (as in time) country fayre at Lire, just south of the Loire from Ancenis. As promised there was music, dancing, country crafts, jalopies, old farm machinery, food, drink and surprises. We arrived during the lunch break so we had sausage sandwich, crepes with sugar and a glass of cider. After lunch, on the stage we had a brass band doing some French favourites and 'Roll out the barrel', then some dancers in Victorian type dresses followed by some ethnic dancers from either eastern Europe or maybe Greece or Turkey. Around the farm and fields there were all types of crafts being demonstrated including clog making, horse shoeing, bread making, wood working with old fashioned tools and a laundry in a pretend river using wooden boards and bats. There was an area with old mainly French cars and another area with old tractors and other farm machinery. There were stalls for the Poste, brick making, a pretend school, lace making, tombola, raffle, bowling and interestingly Esperanto. We had an M.C. In full top hat and tails with a radio mike wandering around and commenting on everything that was going on. Free parking and free entry made it a great afternoon out for a Yorkshireman. After a few hours we'd seen it all, had another drink and went home to sit by the pool.

The next day we chilled out around the gite and I went out for a couple of hours on my own to take some photos. On Tuesday we decided to got to the chateau at Brissac-Quince where we had been to the hot air balloon festival last year. We took a scenic route on the south side of the Loire and arrived around lunchtime. Went to a pizzeria where the waitress earned herself no tip by ignoring us as much as she could and serving everyone else before us. Fortunately the food was good otherwise I'd have given them 1 cent tip as a protest. After lunch we wandered down to the chateau where there was a sign that it would re-open at 2pm so we sat and waited a while. When there was no sign of life after 2 we had another look at the sign and noticed a small addition which said 'Ferme a Mardi', so I guess it doesn't open on a Tuesday, great. So we took a different scenic route back and chilled out by the pool again.

Today is our last day at the gite so we've been getting stuff packed ready to throw into the car in the morning and head towards the next hotel at Villianes de Juhel. We've picked a few stops on the way there as it's only a couple of hours from here and we can't book in until after 5 pm. It's quite hot again today but very windy as usual which keeps it quite cool unless you're out of the wind.