We had a good walk along the beach from Seahouses and went as far as Bamburgh Castle.  Next post I might show a few shots of the beach but for now here's a bit of what we saw in and around the castle.  This first photo is from the beach as we headed towards the sand dunes between us and the castle.  It doesn't look too much but the dunes were pretty steep and the sand was quite soft which made it very hard going to get to the castle.  Also there was a big ditch behind the first line of dunes where you had to go all the way down and then back up a bigger slope. With all the stuff I had in my back pack I was pretty worn out by the time I reached the castle walls.  I guess that would be how any attackers would feel if they approached the castle from the beach and had loads of armour weighing them down. 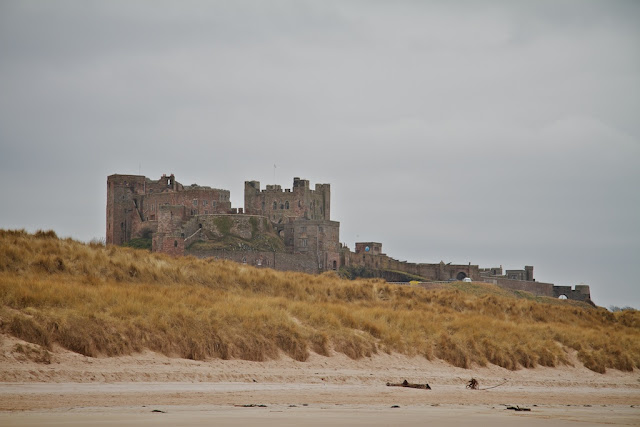 We went into the castle and then found a bench on the castle walls to have a drink and an apple to keep us going (this was our lunch after the big breakfast we'd had at the hotel).  While my wife sat on the bench I took a few shots from the castle wall.  This first one was looking down the barrel of a cannon which was pointed out to sea.  You might just be able to make out a couple walking with their dog down on the beach. In the hazy distance are the Farne Islands (I think). 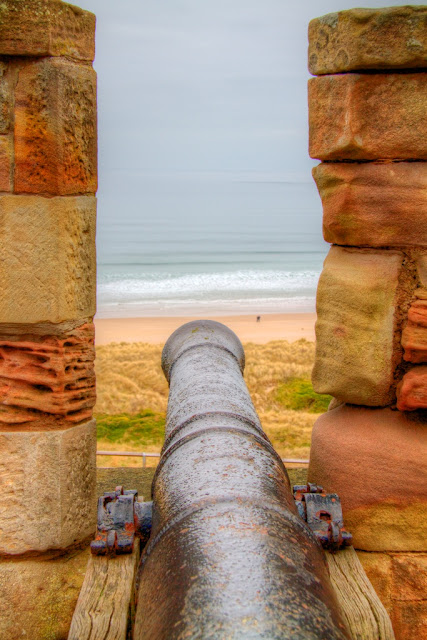 Along the castle wall were a few more cannons pointing out towards the sea. 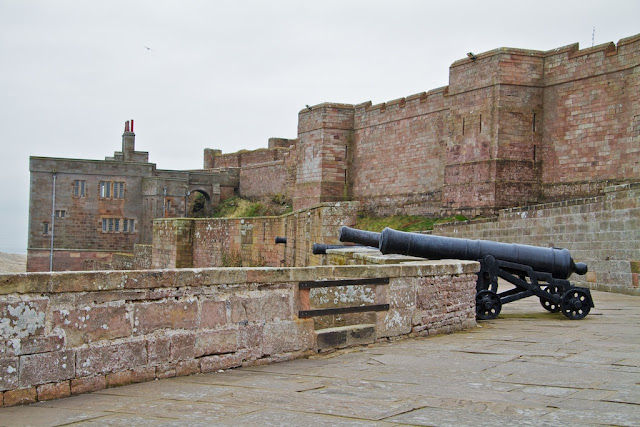 Looking over the castle wall is the view of the sand dunes which don't look as steep as the ones that we had climbed up, although it's quite hard to tell from up here.  The ones that we had come over are around behind the gatehouse but the dunes do look bigger over in that direction. 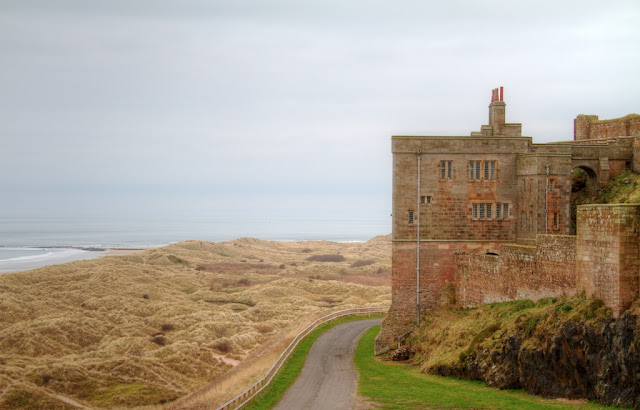 This next shot was from the same place but looking more towards the castle. Here we can see some more of the cannons and also the inner wall of the castle, the second line of defence. 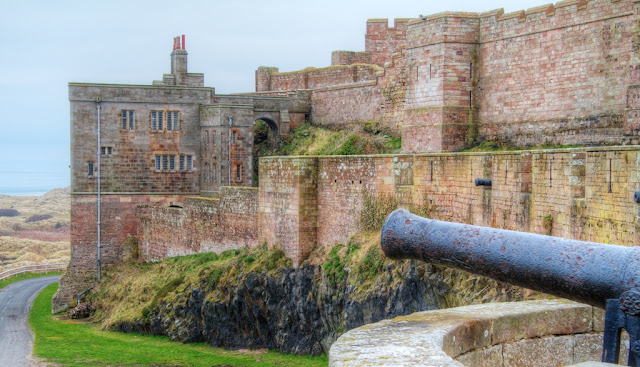 After we'd finished our lunch we had a quick look around the Armstrong aircraft museum which was in the lower part of the castle and then we headed towards the state rooms within the inner castle walls.  As we walked around there seemed to be lots of building within the castle where people are living today, which we thought was a bit odd.  This next photo is the outside of the great hall, on the left, and some of the living quarters on the right.  Remember the the shape of the windows in the great hall for a later photo. 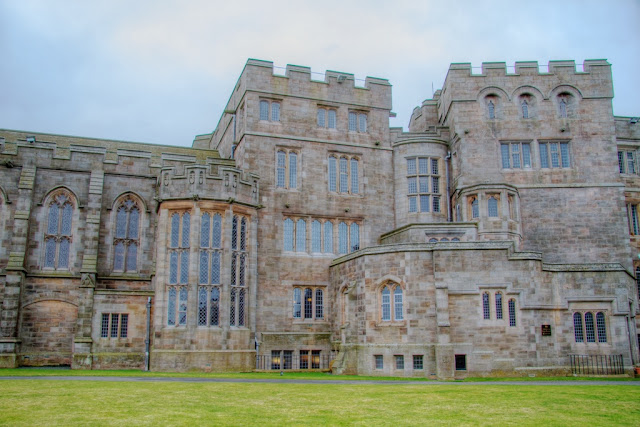 On one of the topmost parts of the castle wall was this small turret with a big bell inside.  The weathering on the stonework is quite amazing and illustrates the variety of different stones that was used to build the castle. 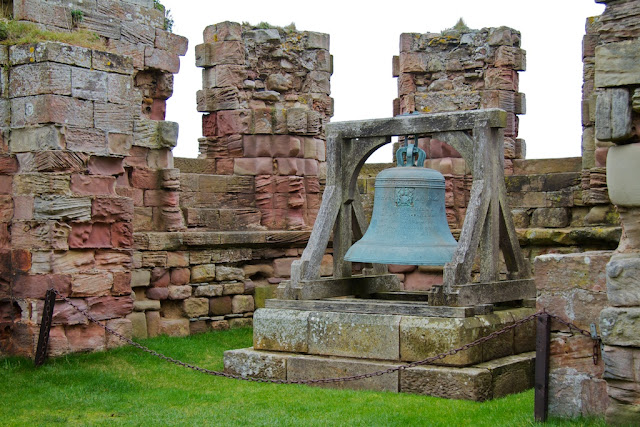 We went inside the staterooms and the first room had this fantastic wooden model of the castle.  I'm not sure that the dues are as steep as the model suggests though. 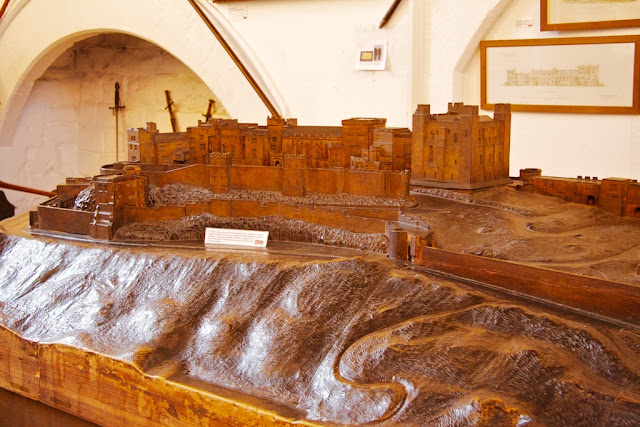 There were a few rooms with lots of old bits and pieces in cabinets which were fairly interesting but not worth photographing.  We arrived at the great hall with had this lovely wooden roof construction. The hall had been completely rebuilt relatively recently which accounts for the incredible condition of the roof timbers. 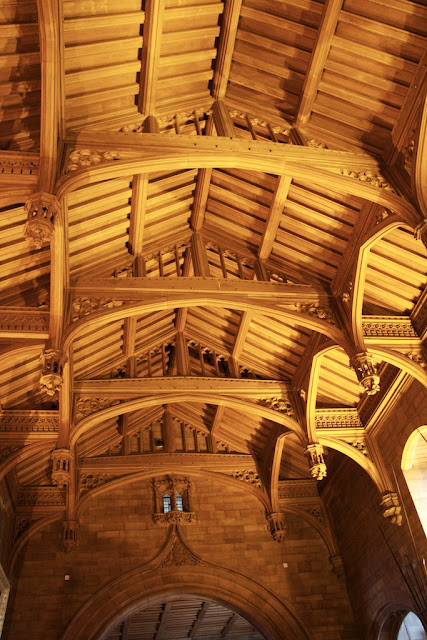 The next pair of photos are of a very ornate clock which was in the great hall. The first one I took with the light from the windows reflecting off the clock face.  Remember the shape from the photograph of the outside of the great hall.  In the second shot I moved to one side so as to have no window light and therefore a better view of the clock face. I couldn't decide which version I prefer so I put them both here. 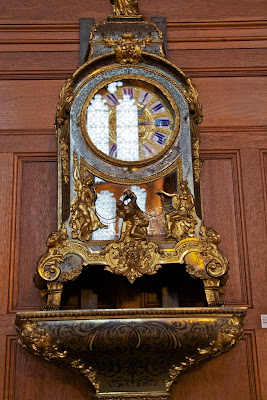 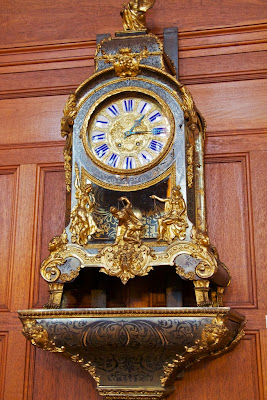 On a raised area at one end of the great hall was a random selection of furniture set out to appear to be a room setting. 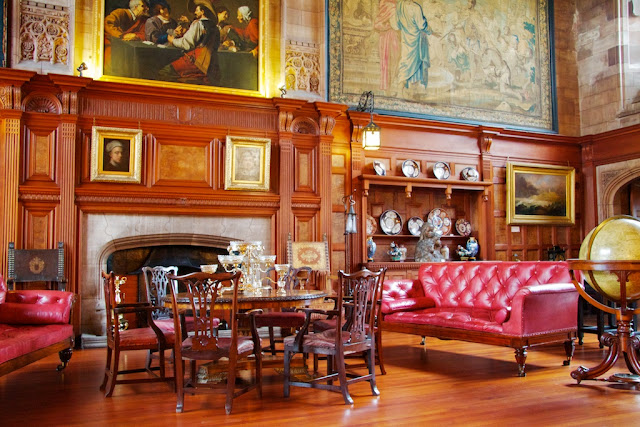 In a later room was a dining table with this selection of glass bowls and decanters. The room was very dark but the light from the window lit up the glassware beautifully. 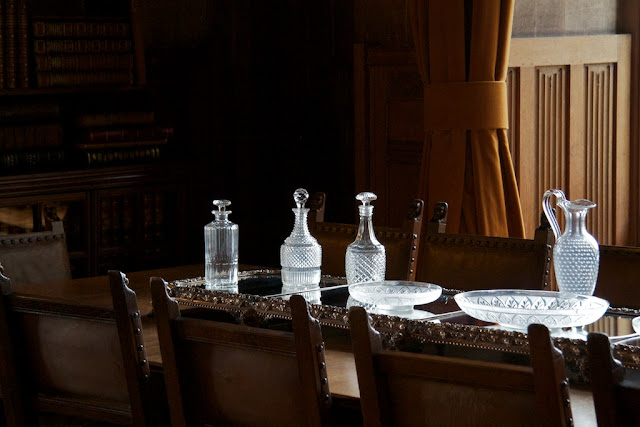 In the next room was this lovely fireplace with the glass screen in front. 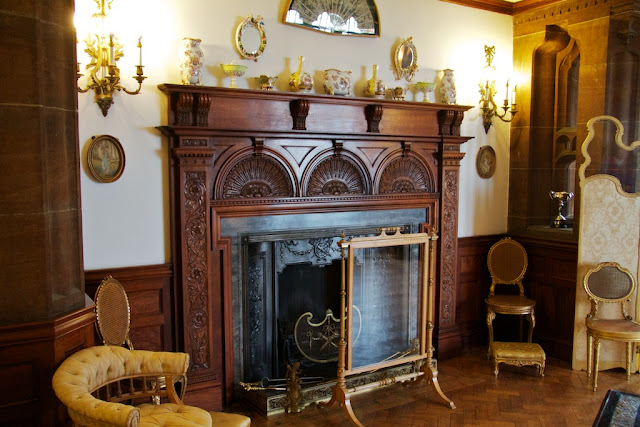 The next rooms were the armoury where there was lots of displays of armour and weapons.  Then we went down into the cellars where there were more displays of weapons and armour. I quite liked this display of swords on the arch of the cellar.The light was very strange in the cellar so I converted it to monochrome to make it look a bit better. 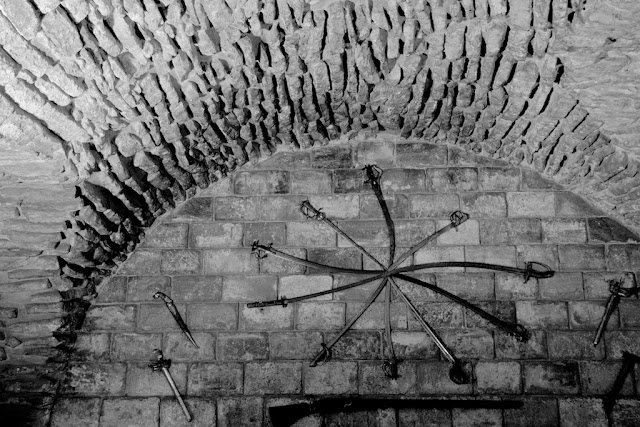 The final display in the cellar was the dungeon, very scary. 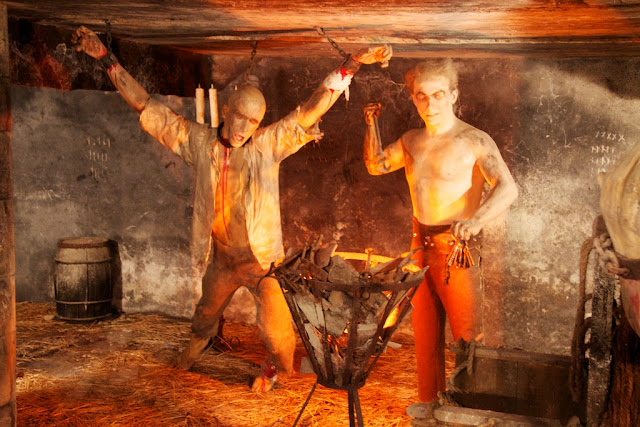 After that we had a quick look around the shop and then back out into the fresh air.  Just before we set off to walk back to Seahouses I grabbed this last shot of an old cart near to the stables (and toilets). 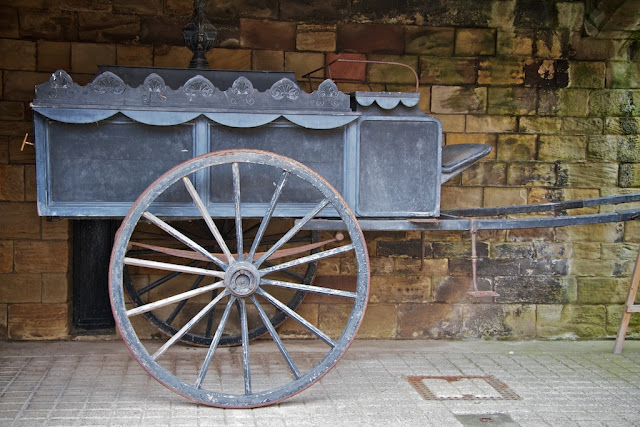