As I mentioned in my previous post I managed to get a few bird pictures while we were on the coast.  The first few in this post were in the early morning at Low Newton by the Sea while it was still fairly dark so theres a lot of noise on the images.  Later in the day we went for a walk from Seahouses to Bamburgh Castle and back where I had some successes and failures with the photos.

This first image was of one of a pair of Oyster Catchers which were feeding on the edge of the water. 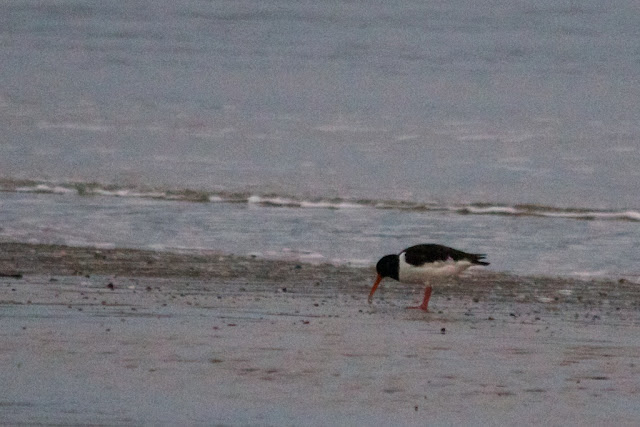 Next to them were a pair of birds which I think may be Bar-Tailed Godwits.  Of course I had to look them up on the RSPB Bird ID website because I really don'r have a clue.  For a while I did think they could Greenshanks but I think the colouring of the beak made me settle for Godwits. 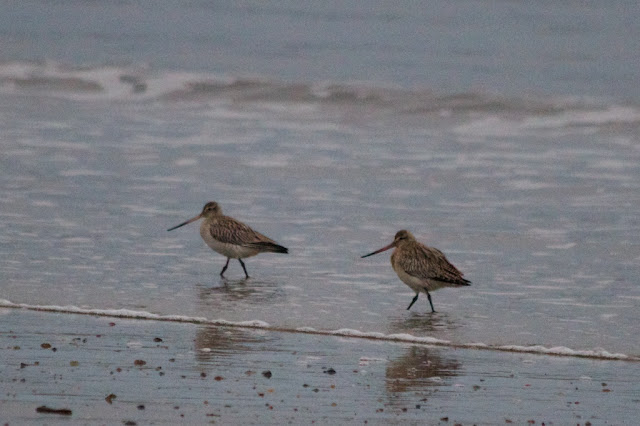 I tried to get closer but of course they flew away.   First the Godwits .... 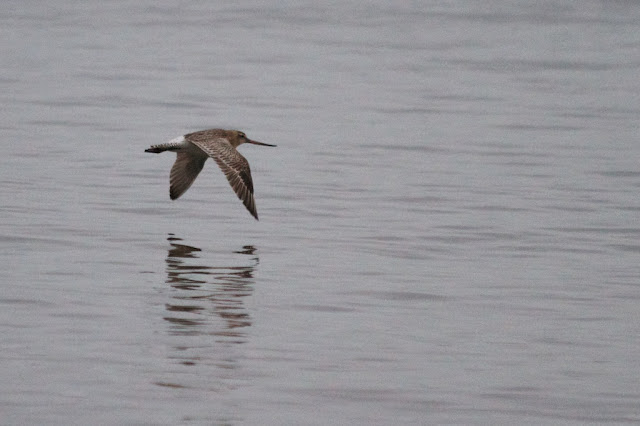 .... closely followed by the Oyster Catchers. 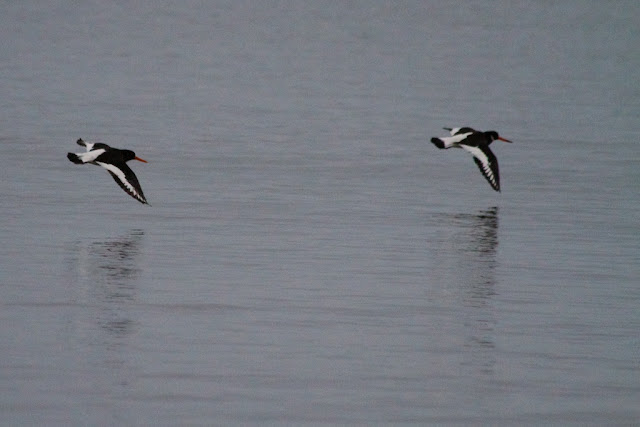 Further along the beach there were lots of smaller birds milling around the waters edge.  In this next picture I think these are Turnstones at the front and Sanderlings further back. 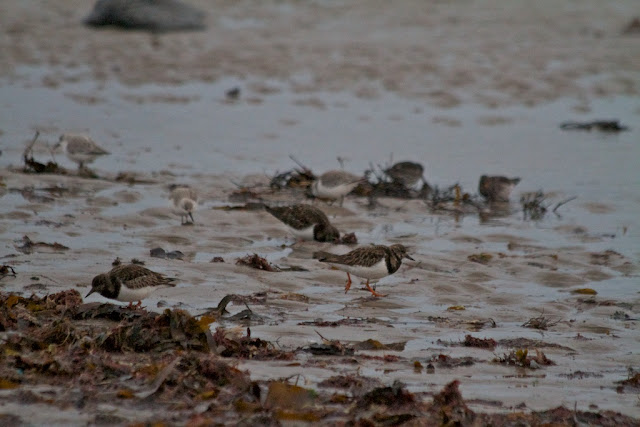 The next image shows some more of the Sanderlings with some Oyster Catchers and a Godwit in the background. 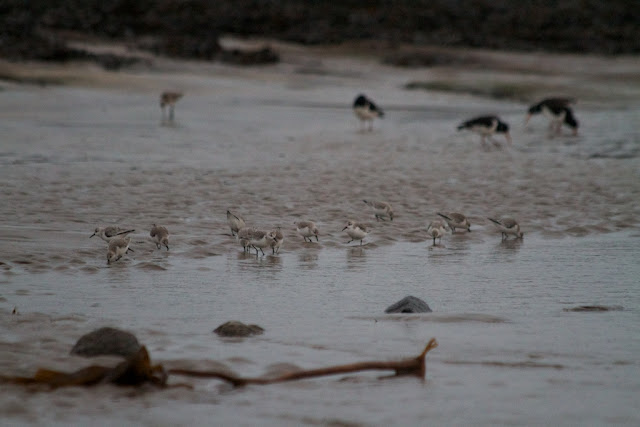 I tried standing very still to see if any of the birds would come a bit closer and eventually a bunch of the Sanderlings started to head towards me.  The little fella in the next shot came the closest but then they started to move away again so I went back to the hotel for breakfast. 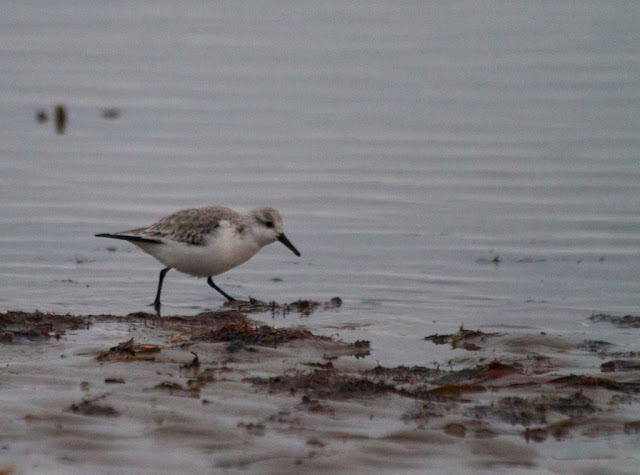 After breakfast we drove to Seahouses where we parked up, put on our walking boots and filled my camera bag with all we needed (including a litre of water, a couple of apples and some sweets).  We walked towards the harbour and there was a couple of Herring Gulls (maybe?) sat on the fence.  This one was watching me very closely as I got nearer to him to take this shot. 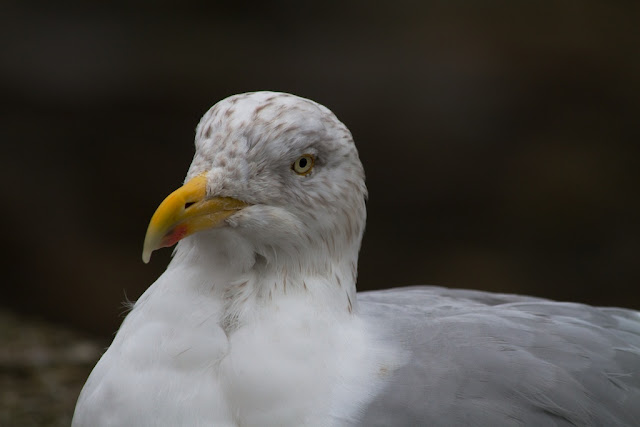 I think this may be some kind of Turn (Arctic or Common possibly) that was sat on a rock down on the beach.  It seemed to be looking out to sea. 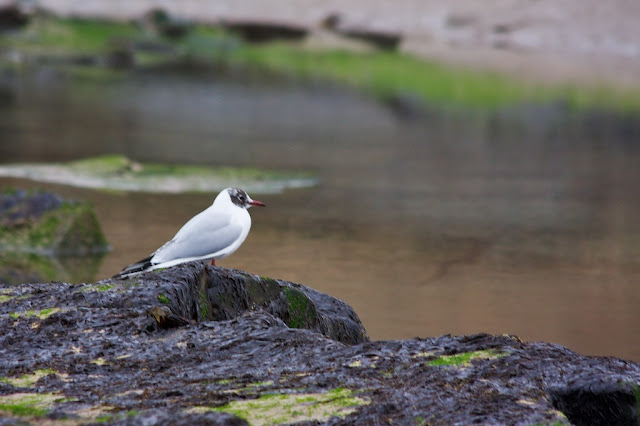 A little further along the beach there was a couple of Turnstones sat on a rock and as we walked towards them I managed to get a shot of this one as it flew off. 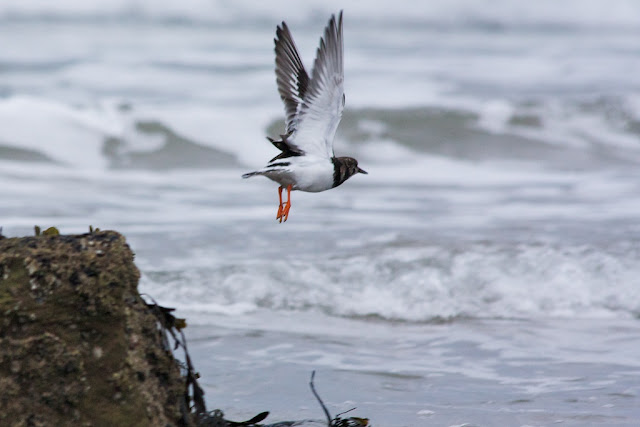 As we were walking along the beach we could see a few large birds sitting out on the water between us and the islands (Farne Islands perhaps?).  We couldn't make out what they were because even with my longest telephoto lens they were still quite far away.  This image has been well cropped and when referring to my favourite Bird Id site I can identify this as an Eider (from where the feathers for Eiderdowns come). 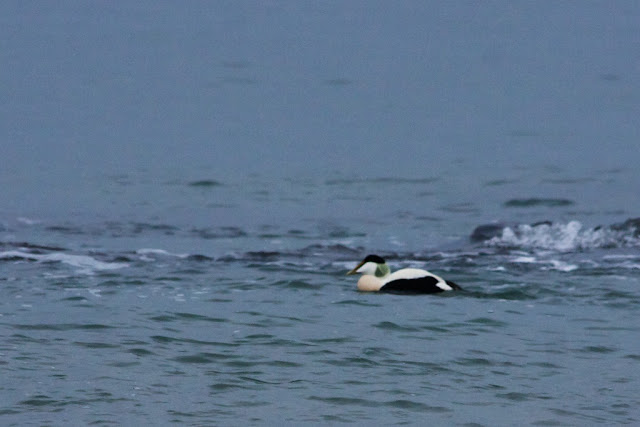 Further along the coast towards Bamburgh we saw these geese at the other side of the seaweed covered rocks.  I knew they weren't Canadian Geese, they were too dark for Greylag or Barnacle Geese so again I had to resort to the Bird Id site.  So I am pretty certain they are Brent Geese.  The RSPB site show them mainly wintering on the South East coast of England with just a little spot on the Northumberland coast. 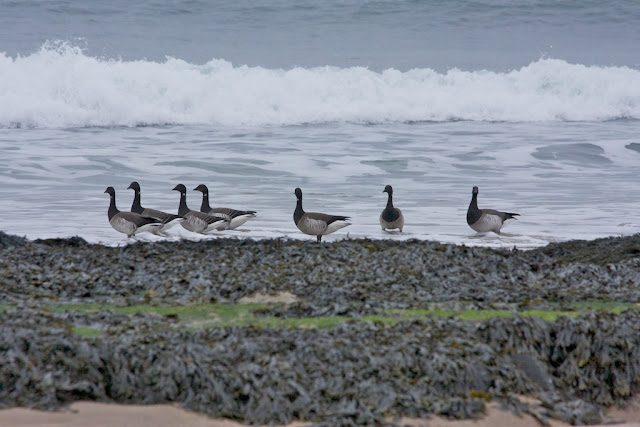 We visited Bamburgh Castle and had lunch which consisted of a sit down, and apple and a drink of water. We'd had a big breakfast at the hotel so didn't really need much to eat.  We had decided to dave ourselves for our evening meal.
On the walk back to Seahouses there was a group of Oyster Catchers walking along the beach in front of us. At one point they headed towards these rocks and so we managed to get level with them so I managed to get this shot of them. 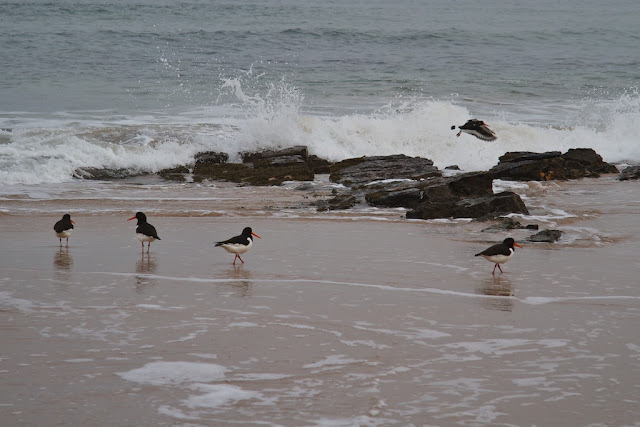 There were a few other people walking on the beach so the Oyster Catchers kept flying up and down the stretch of beach.  I was determined to try and get a good shot of them in flight, and I thought I'd got some really good ones when I looked at them on the back of the camera.  Unfortunately once I'd uploaded them to my computer I could see that they were mostly out of focus on the birds.  Which was a bit of a shame as one that I particularly liked had four of them in very close formation.  I realised afterwards that I should have had my cameras autofocus on the AI Servo setting so that it followed the birds as they flew.  Anyhow this was the least blurred of them all so it's going to have to do until I get another chance. 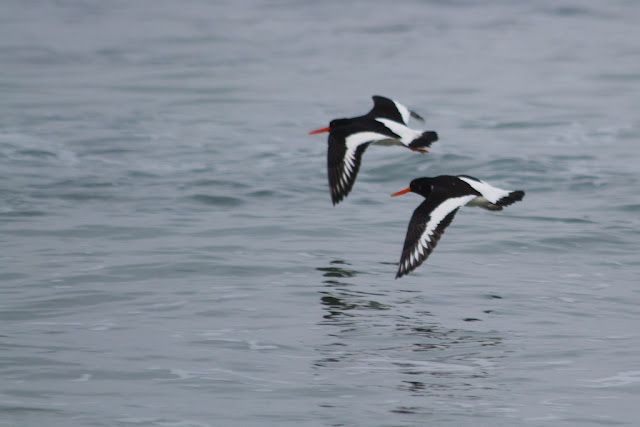 When we got back to Seahouses we stopped to sit on a bench for a while and my wife was talking to my daughter on the phone.  I was taking a few shots over the cliff at the waves crashing against the sea wall as the tide was almost all the way in by now.  A Herring Gull kept flying overhead so this is a shot of it going by. 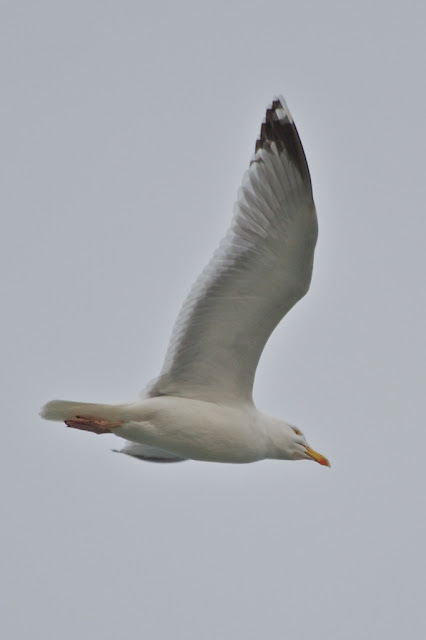 We'd walked a few miles up and down the beach and also around the castle at Bamburgh so we were pretty tired, so we went back to the hotel and had a rest before dinner.

Next time will either be shots of the beach during our walk or Bamburgh Castle.
at March 18, 2011