I guess the posts are a bit out of order because all of these photos were taken on the way from Seahouses to Bambrugh but I had processed the Bambrugh Castle ones first so they were ready to post.  The other reason why I haven't rushed these ones onto the blog is that I don't know how interesting they're going to be to anyone else.  I like them because I was there, but the majority are pictures or waves and rocks and there's not that much to say about them.

As we left Seahouses we found a way down onto the rocks, but this was a bit of a mistake because they were very wet and slippery.  The seaweed and moss made the going very slow and treacherous. However I did manage to get a shot looking back to the harbour which I quite like. On the horizon there was still that narrow band of clearer sky which I had photographed earlier in the morning at Low Newton. 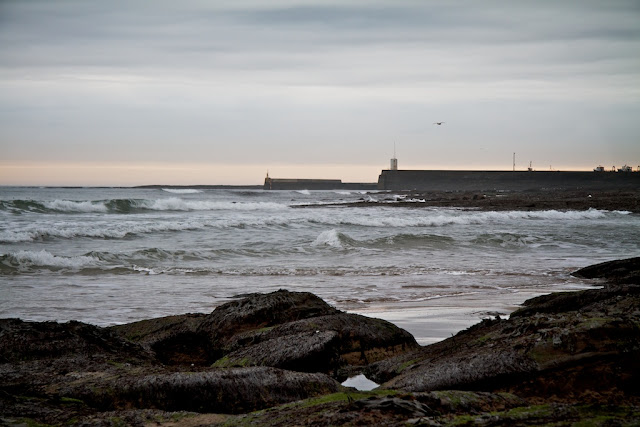 The beaches in this area seem to have nice stretches of sand with outcrops of rocks reaching out into the sea. It's quite pretty in March so I guess it will look even nicer duding the summer months.  I think for photographs the sandy bits are quite boring so most of the photographs are of the rocky bits.  The next photo of rocky bits was a bit further up the beach and this is the first edge we reached which was sheltered from the waves. 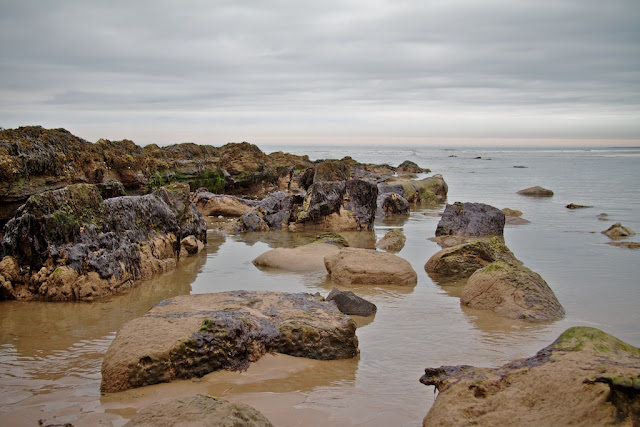 Whereas at the other side of this outcrop of rocks the waves were rolling up the rocks.  The rock formation is a bit strange because it looks as if it was a flat stretch of rock that been tipped up about twenty to thirty degrees.  I didn't get a lot of depth of field on this shot, I guess I must have focussed on the seaweed on the front rock and then everything else it very soft. The harbour is in the background and the narrow band of pink sky is showing up a bit more in this shot. 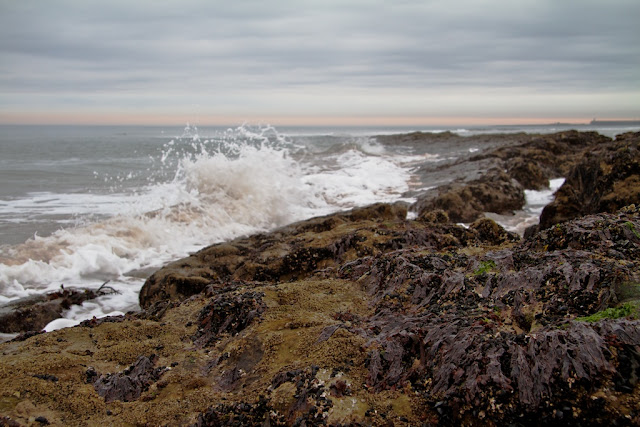 This is another shot from the same place but this time I've concentrated more on the waves rolling in. 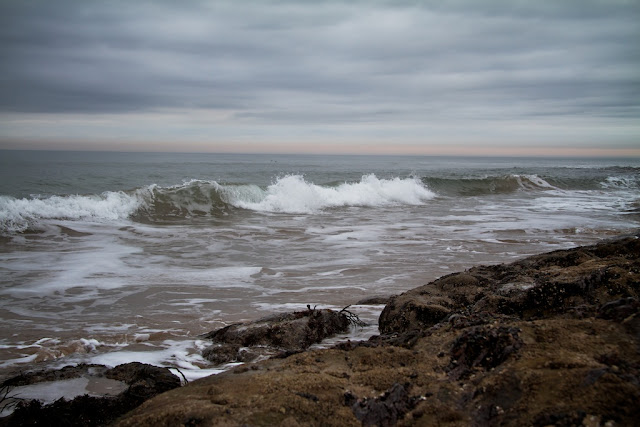 And again the waves breaking onto the rocks and spraying foam into the air. 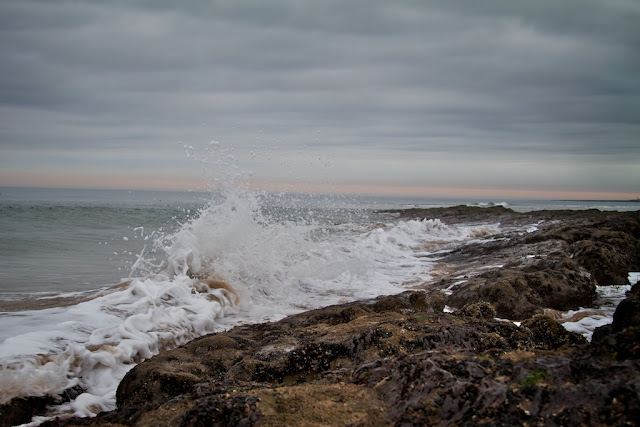 In the next shot I had moved off the rocks and back onto the beach.  Again I'm looking back to the harbour at Seahouses and this time seeing a bit more of the town.  From here you get a better view of how the rocks slope out of the beach and form lines going out into the sea. 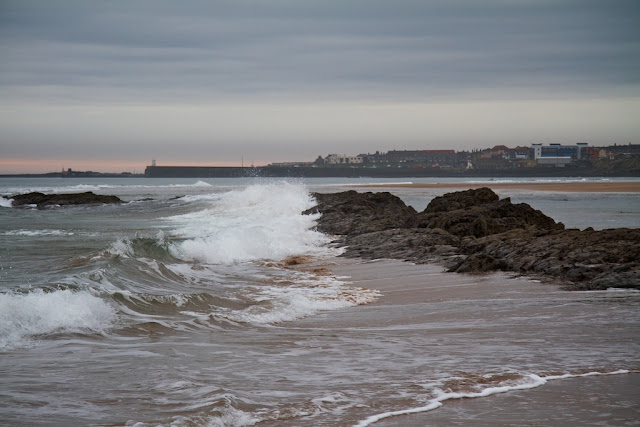 This next shot was taking a lot further along the beach and this time the rocks are stood a few more feet out of the water. Again the water at this side of the rocks is very calm but the waves are battering the other side. 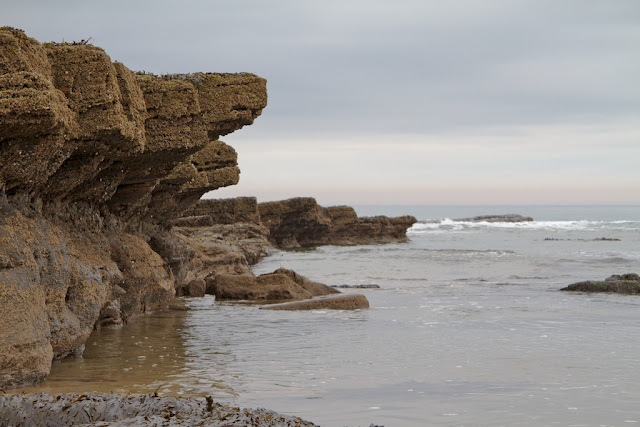 This next photo was between two bigger sets of rocks and here there was a narrow line of rocks which are wavy along the top.  It looked a little bit like a piano keyboard to me. I tried to walk along the top of them out into the sea but big waves kept coming up and covering them. 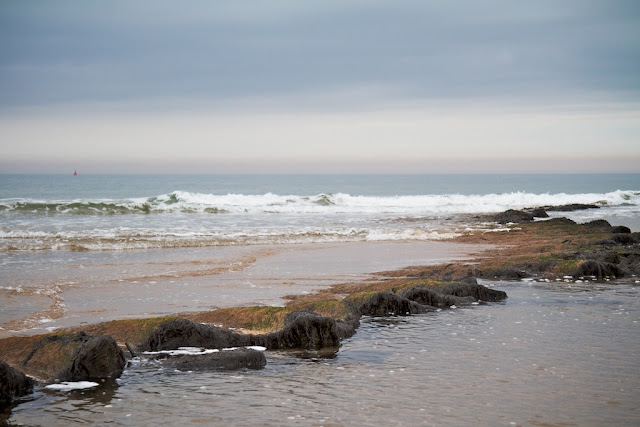 This next photo is where there was a little stream coming off the land and down the beach.  I tried to capture a leading line starting at the bottom left and curving around to the right and then away over the wave that's starting to beak and on towards the island.  By this time the narrow band of pink sky that had been on the horizon had gone so we had wall to wall cloudy skies. 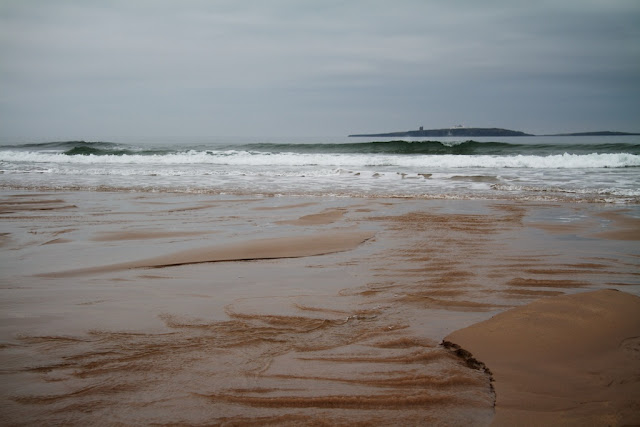 Onto the next rock formation and another wave breaking over the rocks. 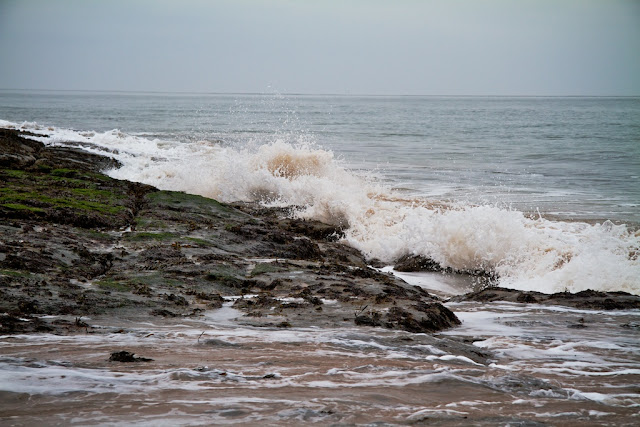 Here's another shot of a big wave heading towards the rocks.  I quite like the colours in the wave on the right hand side with the yellowy brown sand and the bluey green of the sea merging together. 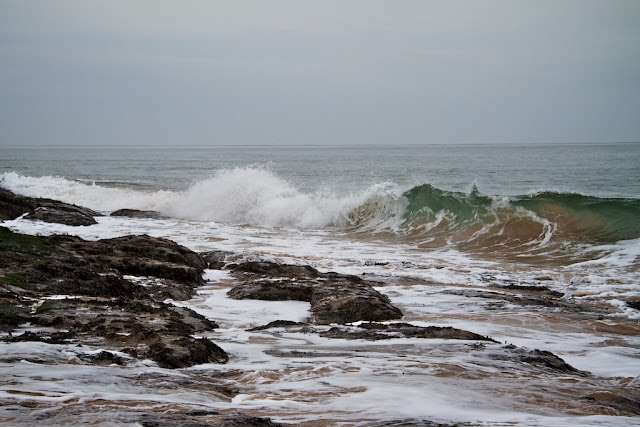 Here's a closer up shot of a wave about to break.  Again the brown and green in the wave and then the white foam looking a bit like melted candle wax below the crest.  I cropped a bit of beach out of this shot so the emphasis was more on the waves.

In the next shot I've done a black and white conversion because there wasn't a lot of colour anyway and it allowed me to push the contrast a bit more.  The sea looks to be boiling and shooting foam up into the air like like fireworks. In the next shot a big wave had crashed over the rocks and then as the sea went back down the water was running off of the rocks. Again the foam looks a bit like candle wax especially at the very front of the photo where camera has frozen the foam in waves and the oddly arcing globule in the middle. 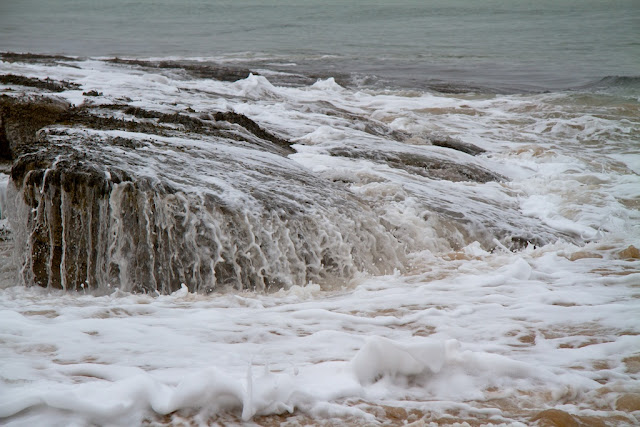 Most of the rocks along the beach were very igneous looking but every so often there were small areas of sedentary rocks which were almost slate like.  This particular slab looked a bit like a contour map of the Himalayas and was very colourful with the oranges at the front and the greens at the rear.  I was also intrigued by the straight lines cutting through the layers as though it had been broken and then glued back together. 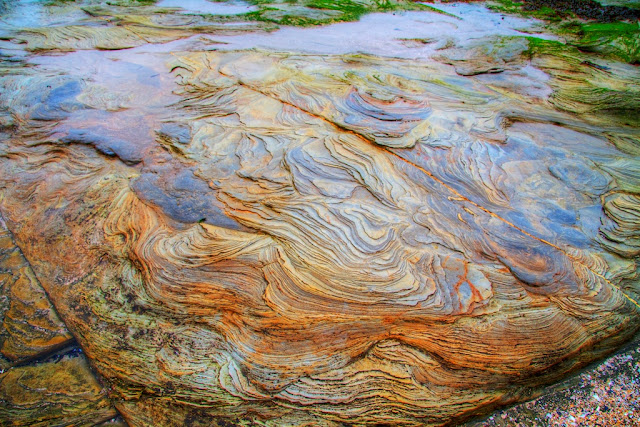 On the way back from Bambrugh to Seahouses the tide had come all the way in and almost all of the rocks had been completely covered by the sea.  So the journey back was a lot quicker because I didn't take as many photos and the only ones worth posting have been included in earlier post.