It's been a while, I don't know what happened.  I have been busy clearing down my photographs from last year, then I got side tracked onto photos from 2009 and then pre 2009. I have deleted somewhere in the region of 10,000 images and I've still a way to go.  I've also re-processed (or processed for the first time) quite a lot of images from 2010 and 2009. I don't seem to have had time to post on any of my blogs.  Anyhow I'm back and I am going to blog more regularly from now on.

We had a couple of days off from work last week and made a trip up to the North East of England starting with a visit to the Beamish outdoor museum.  It's spread over quite a big area and there are a few different  parts of the site to visit.  You can either walk along the paths or there is a regular service of buses and trams to pick you up and drop you at the main centres.  I've left the photos small on the page because there are lots, but if you want to see bigger versions you can click on them.  Many of the inside places were very dark so some of the images have a bit of noise, however if the noise bothers you the pictures can't be that interesting. 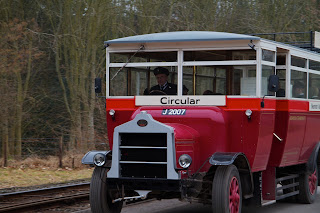 We walked down to the pit village where we looked into the school house.  This classroom was set up for a class of children to come and see what school was like in the olden times, 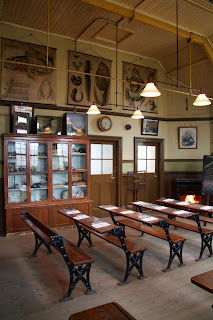 In one of the rooms was a teacher screwing up bits of newspaper to use for lighting the fires in the classrooms. He was talking to a visitor and it struck me that he looked as if he was being told off by the teacher.  Made me smile. 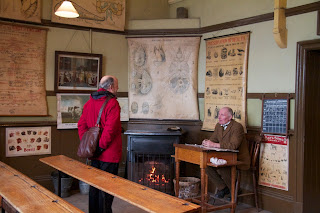 Here's my wife Lynne learning her 9 times table and how to add up in Pounds, Shillings and Pence.  She seemed to be struggling a bit, but as an accountant you wouldn't expect her to be able to cope with money sums. 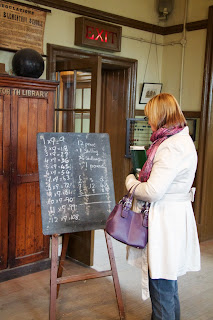 Across the road from the school was a row of typical pit workers houses.  Two up and two down where anywhere up to fourteen people would live. Four generations under one roof was not unusual. The heart of the houses would be the big coal burning range where all the cooking and heating happens.  The houses had old tin baths hung up outside which would be brought in and filled with water from the big kettles. 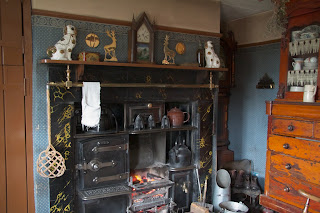 The next house in the row was a bit more grand and a lot less cramped. Perhaps a supervisor or manager lived here. 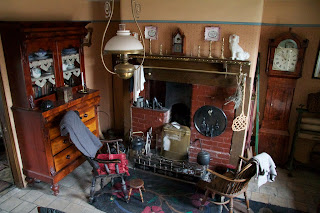 In their front room they had a lovely dining table set up for afternoon tea. The previous house had to have beds in the front room to accommodate the number of people living there. 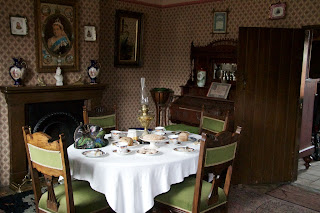 At the end of the road was the pit head with the engineering shop and stores. Within one of the buildings was a small office where one of the managers would have worked. 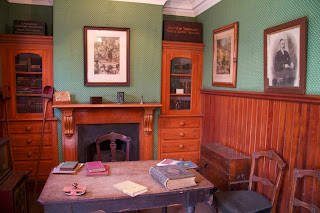 We walked along the path towards the town and stopped off to have a look at the station. We really loved these old trunks piled up on the trolley and the old posters in the notice board behind. 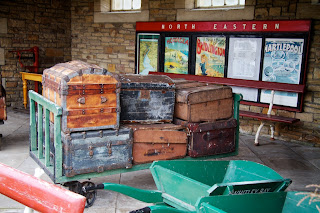 From the station we walked along to the town where there was these old fashioned tin advertisements on the fence. 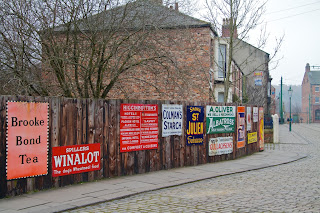 The houses in the town were much bigger than the pit houses and many of them had businesses being run from them.  Here is the office at the solicitors house. 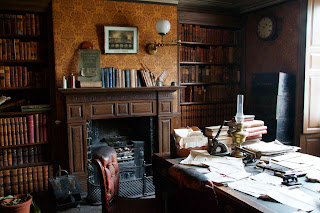 This is the dentists' waiting room at the entrance to the house and his surgery was on the floor above. 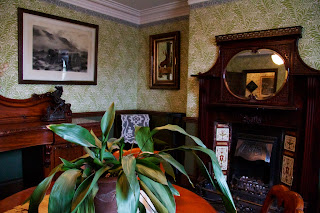 Upstairs in the house next door was a lovely nursery with lots of toys and games scattered about and the table set out with a dolls tea set. 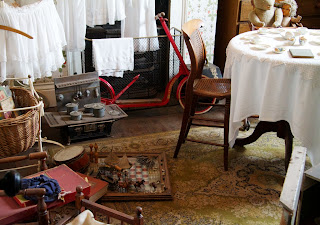 While downstairs in the kitchen was a lovely dresser with all the Sunday best china displayed, 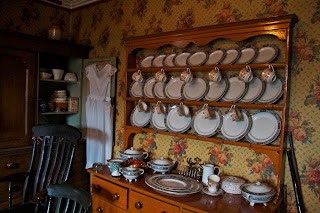 And in the front room was a typical Victorian clutter with all sorts of ornaments an nik-naks. 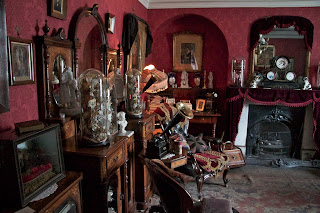 Around the back of the houses was a yard where the horse drawn carriages were kept. Inside one of the sheds there was a tool bench in the corner with boxes for nuts, bolts and other assorted hardware. 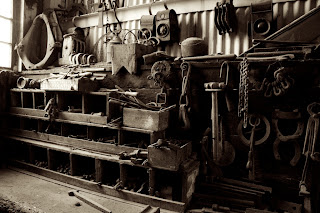 Along from the tool store was a little forge with the water bath for quenching the iron products made here. 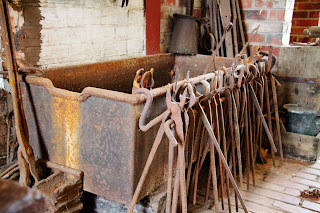 Back onto the street and there was a row of shops including this sweet shop.  In the back room they made their own sweets for sale. 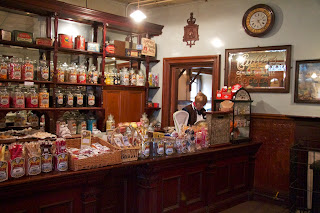 Further around on the road was the bank. 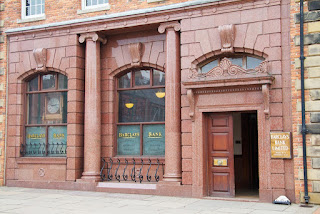 Inside was the cashiers desks. 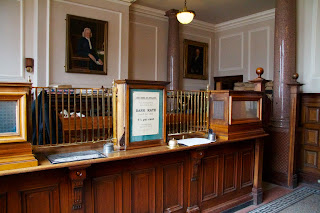 This lovely little safe was tucked inside the managers office but the main safe and safety deposit boxes were down in the cellars. 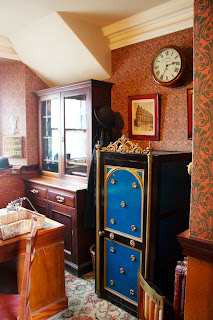 Back outside the bank we see the row of shops and a pub. 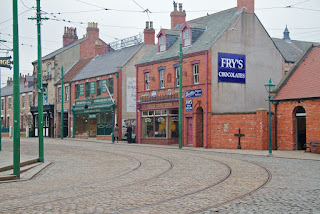 Opposite these shops was a garage and a big old co-op with a separate door for each department.  We started off in the grocery department where there was all the old fashioned boxes of everyday products such as salt, corned beef and biscuits. 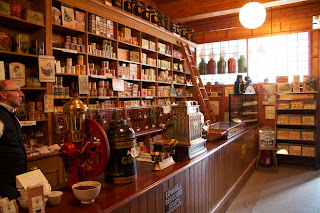 Next door was the drapers and then the hardware store. 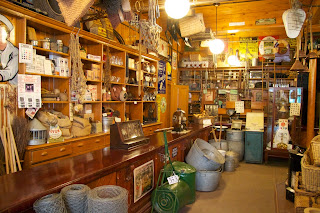 It is an amazing museum and even though quite a bit of it was closed for the winter season we had a really good time.  All the staff were very friendly and more than happy to recount their tales of how things were in the Victorian and Edwardian times.  We also visited the Masonic Hall, the print shop where I "coined a phrase" with the printer and a few other places which I haven't included in the blog. We will go to the museum again in the summer season to see the bits that weren't open such as the farm and the manor house.  They are constantly building new places and are hoping to open a bakery and coal fired fish and chip shop in the town sometime soon.