Low Newton by the Sea at Dawn

After we had been to Beamish we stopped at the Masons Arms at Rennington near Alnwick and the room was quite nice.  We had a lovely meal in the restaurant with a bottle of reasonable wine.  The people running the hotel and restaurant were very friendly and made us feel at home.

I got up very early the next morning because I wanted take some photos of the sun rising over the sea.  It's hard to tell when you get up when it's still dark to know whether the weather is going to be good to you so as I drove towards the coast I was just hoping I could get some good photos. Unfortunately I didn't have a map so I drove in the general direction towards Seahouses and looked out for somewhere I could find a beach.  I saw a sign that said Newton by the Sea, which sounded promising,  so I turned off and headed towards the town. I wasn't that close to the sea but another sign in the town pointed to Low Newton so I carried on until I could see the sea at the end of the road and I pulled into a car park.

It was starting to get light and I could see that there was just a narrow band of clear sky just above the horizon but lots of cloud above.  It wasn't looking too promising but I thought I'd persist and see what I could catch.  This first image was taken soon after I reached the beach, the tide was quite a way out and the sand was very wet. It was still quite dark and I had my camera on the tripod because I knew I was going to need some long shutter speeds to get enough light into the camera. There was a group of birds just on the waters edge and the redness of the sky was reflecting on the wet sand. The odd pebbles on the beach and the lines in the sand give the foreground a bit of texture. The focus is on the beach in the foreground so the birds and the rocks behind are a little soft but I thought it was quite a good first shot. 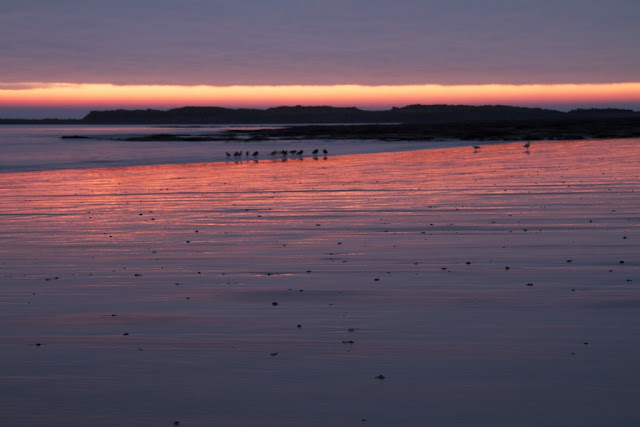 For the next image I had moved up to where the birds had been and had the camera low down near the sea. I closed down the aperture to give a greater depth of field and also slow down the shutter speed even further to six seconds. The effect it produces is to make the sea look very ghostly as the tide move in and out over the rocks and seaweed. 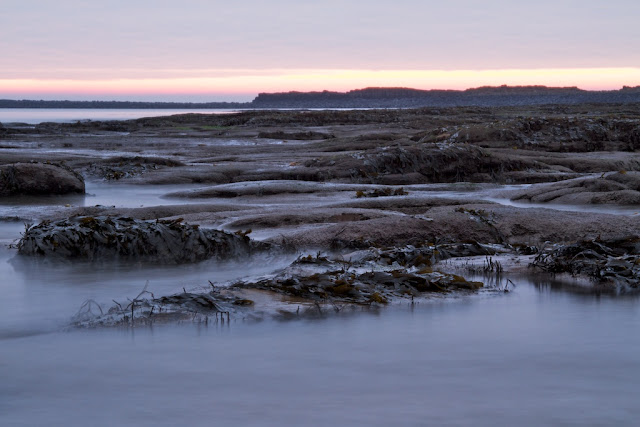 The next shot is a bit further along the beach and this time is over two and a half seconds so there's a bit more texture in the waves. I was thinking I could have done with my filters to cut down the light a bit more so I could get an even longer shutter speed.  Next time I will try and remember to bring them with me. 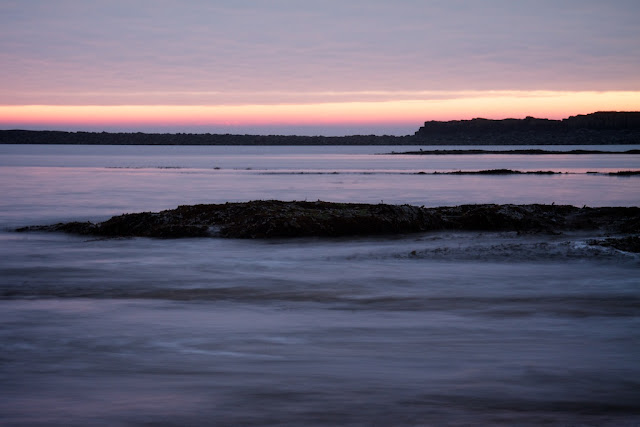 Here I got low down to a patch of big pebbles and a small pool behind the rocks. I've never been to this coastline before so I wasn't entirely sure what I was going to find on the beach. So far there seems to be a lot of variety. 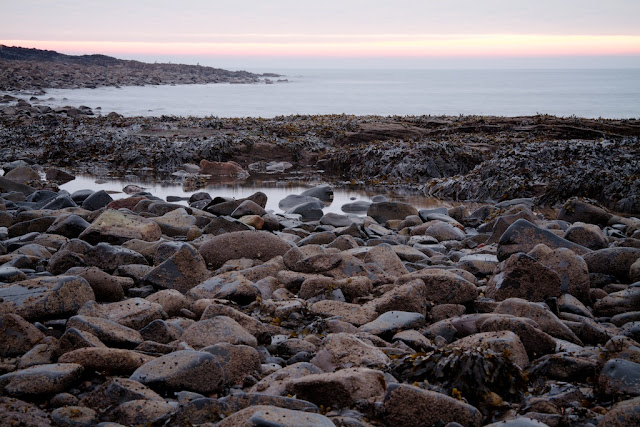 It was starting to get a bit lighter now although there was still no sign of the sun on the horizon. In the distance I could see what looked like the remains of an old castle out on a peninsular so I took a slightly longer telephoto shot of it. When I got home and looked up where I was on google maps I discovered that the ruins were Dunstanburgh Castle which might be worth a visit next time we come this way. 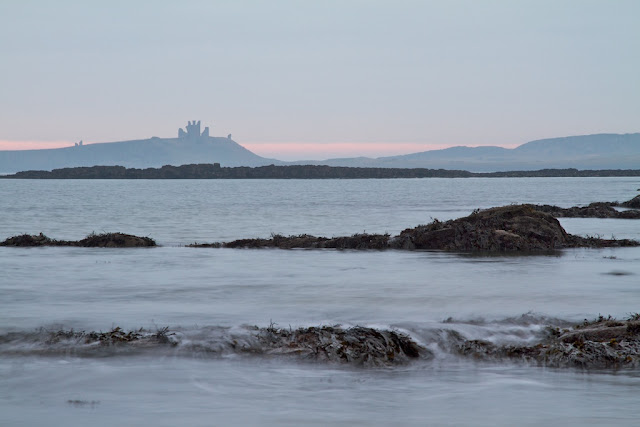 I continued walking along the beach and the sun was trying to get above the horizon.  There also appeared another bank of cloud on the horizon so the narrow bank of clear sky became even smaller.  These next few shots were all taken in a very short time as the light from the sun behind the lower bank of cloud was reflecting off the bottom of the higher clouds.  In the first one I was trying to capture the texture on the underside of the clouds. 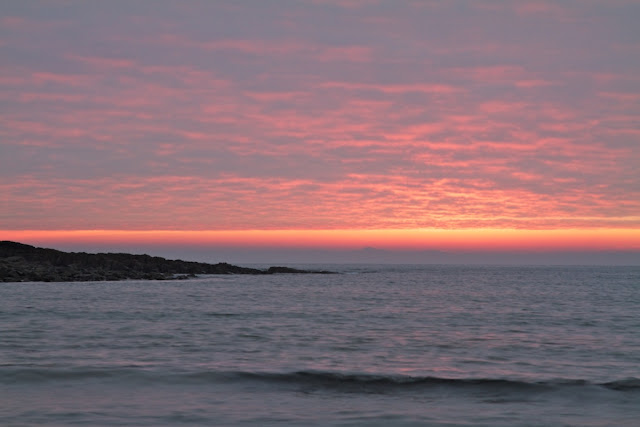 In the second shot I pulled back and was trying to get more of the secondary reflection of the light from the underside of the cloud in the surface of the sea. 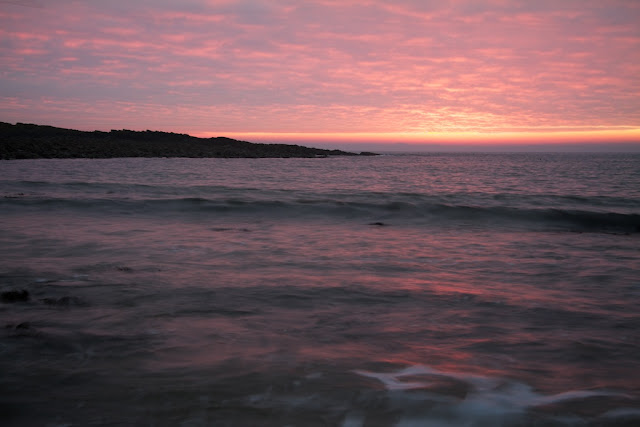 Very quickly the light was getting more defused so I moved along the beach to behind the seaweed on the rocks.  Here the light was reflecting on the seaweed as well as all across the sea.  I had slowed the shutter speed down again to lighten the scene and also smooth out the waves. 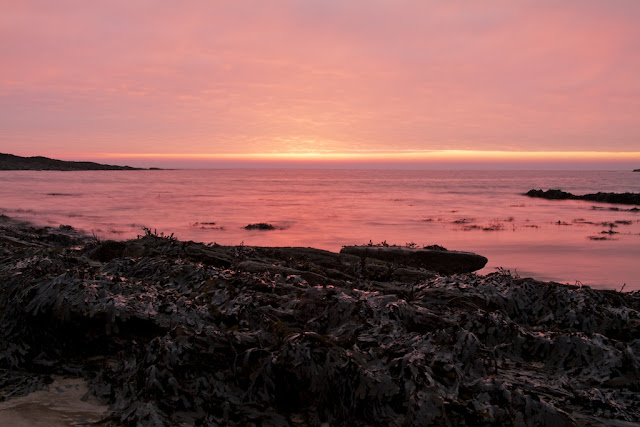 I moved along the shore a little more so that I wasn't completely behind the seaweed for this next shot. The light in the sky was getting more and more fuzzy. 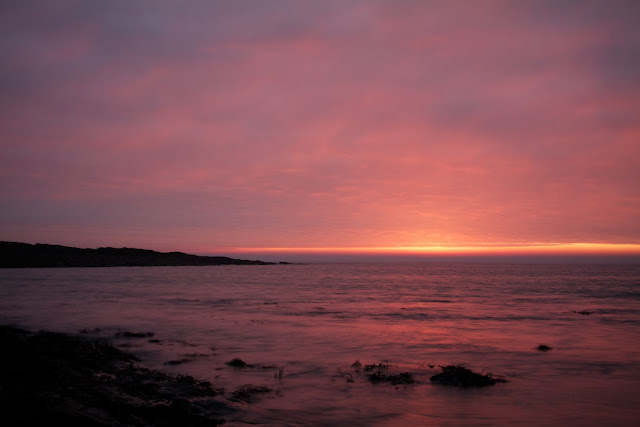 In the next shot I swung the camera back towards the south to get another shot of the castle in the distance.  The sun was still coming up on the left and the light in the sky was even more fuzzy. 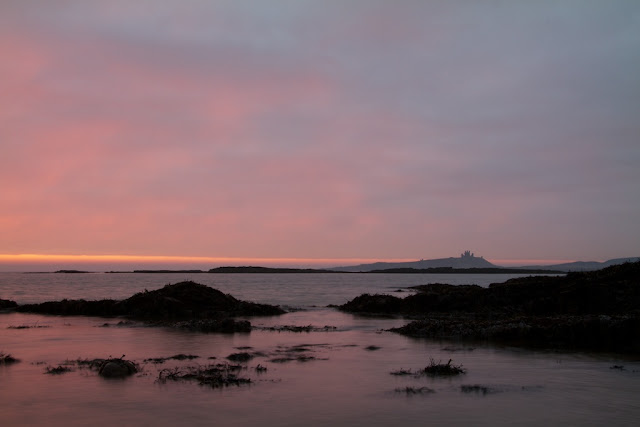 I took quite a lot of shots as the sun finally made its appearance above the clouds on the horizon.  I chose  the next shot because you can see nearly the whole disc of the sun in the ever narrowing gap between the cloud banks. 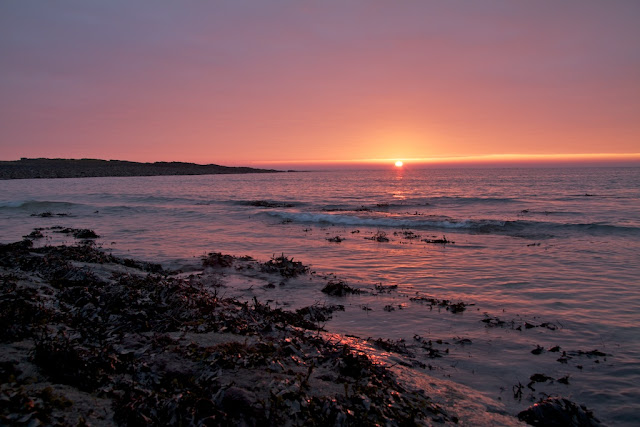 Shortly afterwards the sun started to disappear behind the upper cloud bank.  I liked this shot because of the line of light right from the horizon up to the seaweed on the beach. 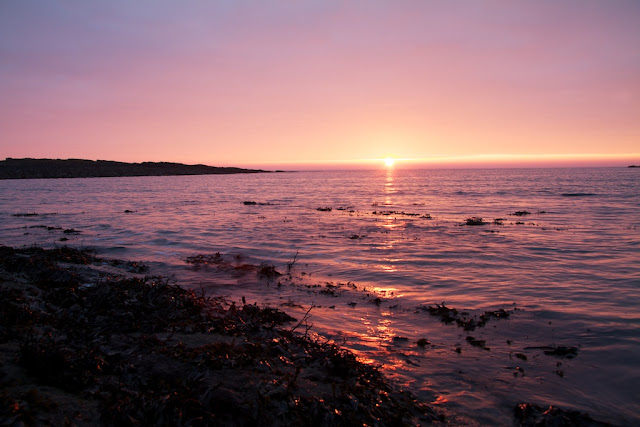 Soon after this it started to get a bit lighter but the colours in the sky we becoming less vivid.  I took a few more shots but I felt they were becoming less interesting. I was also feeling a bit thirsty and ready for my breakfast so I decided to head back up the beach towards Low Newton.  There were quite a few birds on the beach so I put my long telephoto lens onto the camera so I could grab a few pictures of the birds. I might put some on the next post. I turned around and saw the castle in the distance and there was nearly enough light to see some detail so I took one last shot before concentrating on the birds. 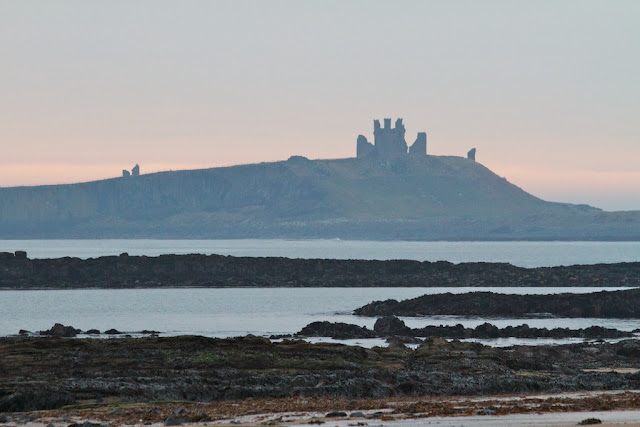 As a set of sunrise photographs these weren't the best but they weren't a total washout, I'm quite happy.  I've had much worse days nearer to home but I was my only real opportunity on this short visit to the North East. We will no doubt come again and maybe I might have a bit more luck.
at March 16, 2011