I finally had an opportunity to take some photos of my daughter, Ginny, riding her horse, Moonlight Rose at the stables.  Fortunately the weather was dry and there was a bit of sunshine about.  Unfortunately, while she was riding the sun disappeared behind a cloud and stayed there until after she had finished.  The other good thing was that she was able to ride in one of the outdoor arenas rather than the indoor one which is very, very dark and not good for photography.

The sun was out for this first photo where she was waiting to start her lesson and I took this shot in a really nice standing pose.  I spent some time on post processing this image to blur out the background because I didn't like the way that the red brick house overpowered the main subject.  Looking at it now I think maybe I could have desaturated the background a bit as well. 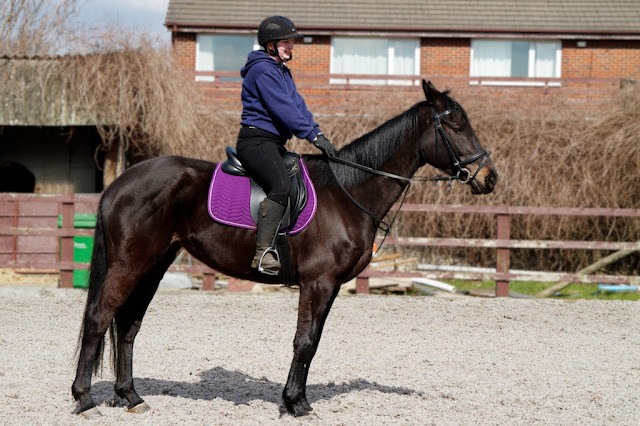 This was the first photo that I also made a black and white version and pushed the contrast a bit more.  I think it makes the horse look very sleek and it really stands out as the main subject. 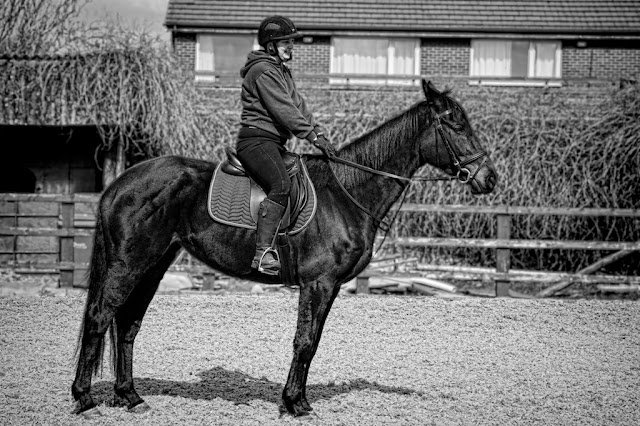 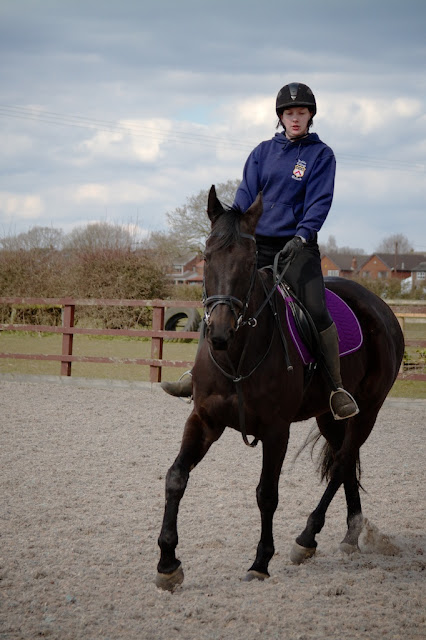 This photo was taken at the far end of the arena so we've lost the buildings in the background but unfortunately the sky is completely bland. 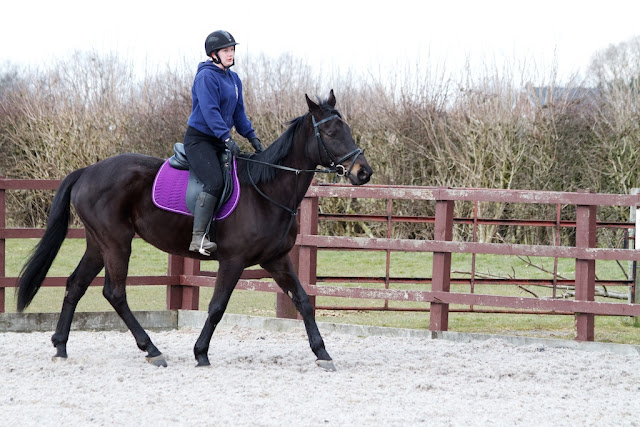 While converting this one to black and white I darkened the sky a bit and also cropped the photo to 4 X 3.  As with the first black and white image the texture of the horse is amazing. 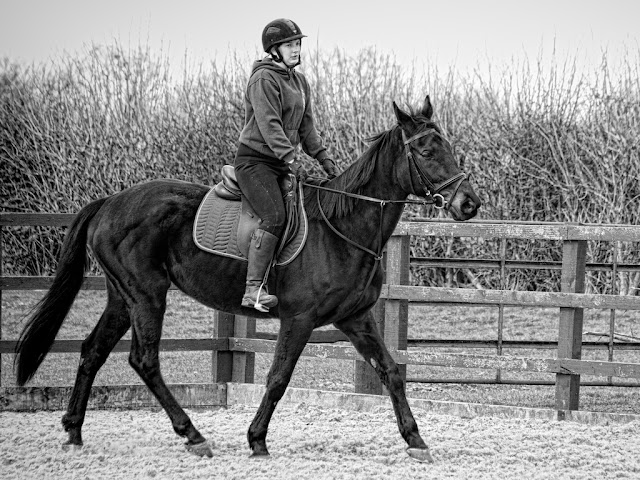 Ginny was taking the horse at a canter so I was happy with this shot where the horse has three feet off the ground.  Again the black and white version pulls the subject forward from the background. 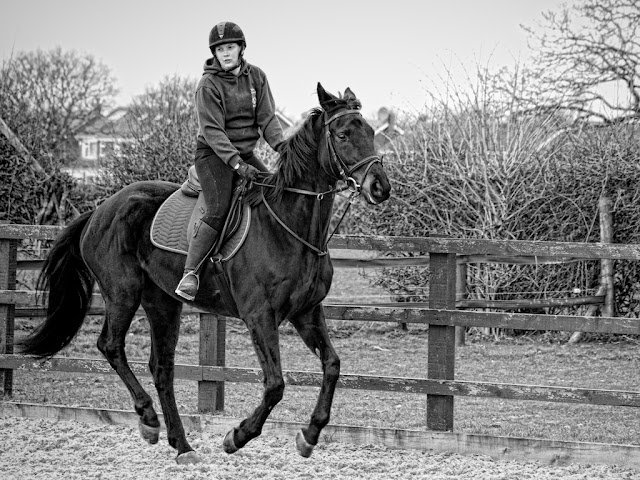 Another high speed photo so I was having to pan with the horse to try and keep it in focus. 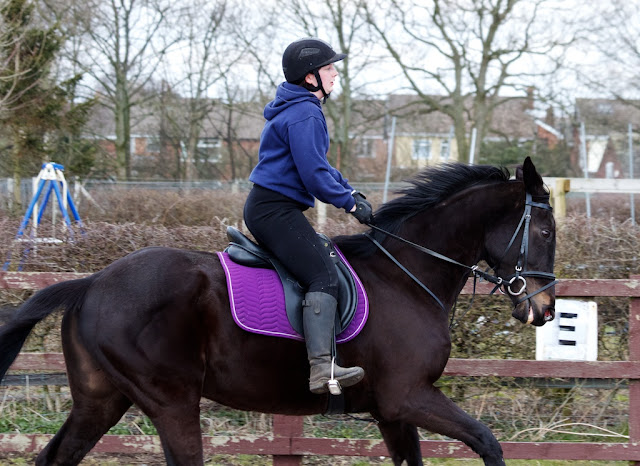 In this photo Rose was getting quite excitable and throwing her head around.  I also like the way the tail is curled with wispy bits flying about. 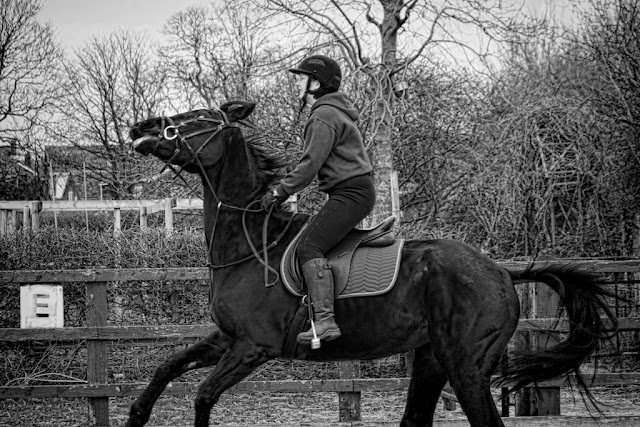 The last photo was very close up as Ginny and Rose were leaving the arena.  The sun was just coming out again which is reflecting from the leather and the horses mane. 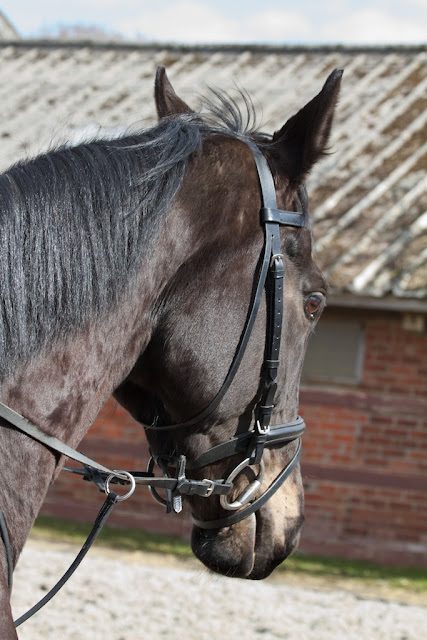 Another black an white conversion which is quite good but because of the sunshine reflecting from the horse's mane it looses the differentiation between the mane and the neck.  In the colour version the mane is definitely black with the horse looking quite brown.  I suspect that Ginny would prefer the black and white version because Rose looks more black. 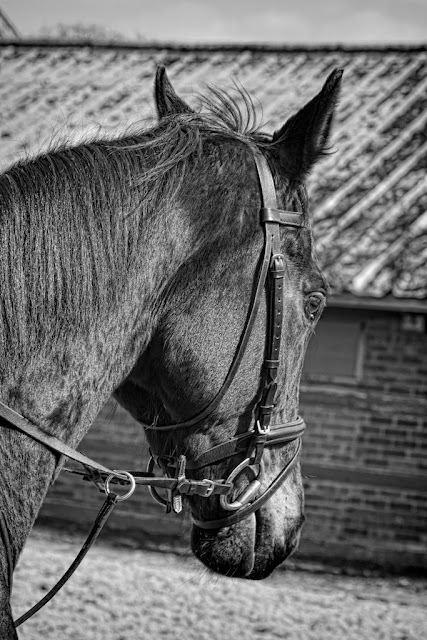 There's a few more photo's from the session in my Picasa album and you can scroll through them all and see them full size.  Also lots more of my other photos from the blog are there to view.
at April 04, 2013