On the first full day in Ireland the weather deteriorated drastically and it became very windy and rainy.  Even so we decided we wanted to get out for a walk so we headed to the end of the Sheepshead Peninsular where there is a little car park and a visitors centre.  We thought there'd be somewhere to walk and maybe a path.  The road to the visitors centre was, to say the least, interesting.  We started off on a normal rural road which became narrower and narrower as we went along.  It was further than it looked on the map and the last few miles were a twisty, hilly, single track roads with the occasional passing places.  The road was very bumpy and uneven with a wide band of grass down the centre.

When we reached the visitors centre and cafe, it was closed.  I guess it's a bit early in the season for the tourist places to be open in such an isolated area.  However, in the window of the visitor centre there was a bit of a map showing a circular walk to the lighthouse and back so we decided to give it a try.  There was a good toilet block next to the centre which was open and was remarkably clean and well equipped.

As we set of the wind became stronger and on the first high part of the path it was quite difficult to stay upright.  We were walking along a ridge on the South side of the peninsular.  We were keeping away from the seaward edge because it was a very steep slope, straight into the water.  The clouds were very dark and moody.  Just above the horizon there was a break in the cloud which has blown out the highlights in the photo but not too bad. 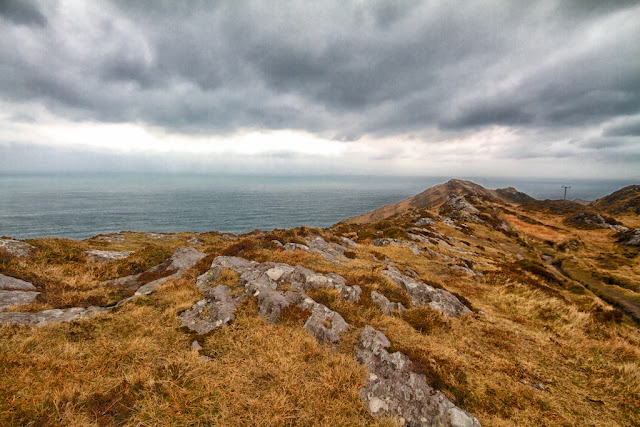 As we continued along the path it dropped down the North side of the ridge which was a bit more sheltered from the wind.  When we got closer to the end of the peninsular there was a little lake between the ridge we were on and the other ridge to the North.  Over the top of the Northern ridge we could see Bantry Bay the next peninsular where there is Bere Island.  There's a large ship which may be an oil tanker heading up the bay towards the Whiddy Island oil terminal. 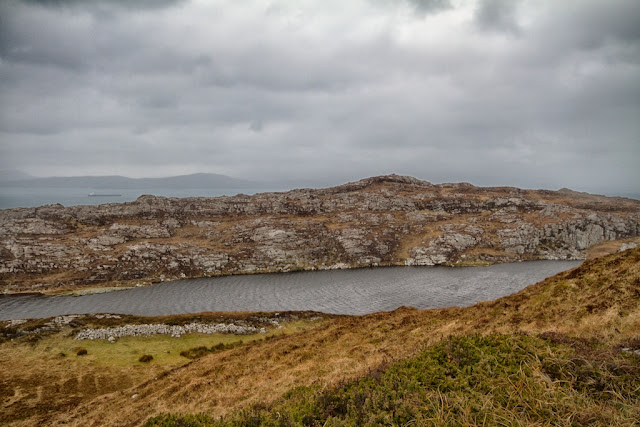 We took a slight detour from the marked path and went to a fence that was at the end of a slope.  When we looked over the fence where there was a vertical cliff which dropped over a hundred feet straight into the sea.  It was very scary, I'm not good with big drops.  We looked off to the right and spotted a sheep about three quarters of the way up the cliff, just munching on a little patch of grass.  We really couldn't figure out how it got there, or how it was going to get back onto flat land but it seemed pretty relaxed down there.  It was still very windy and it was whipping around the cliff edge so we were a bit worried that it would blow the sheep right off of the cliff face. 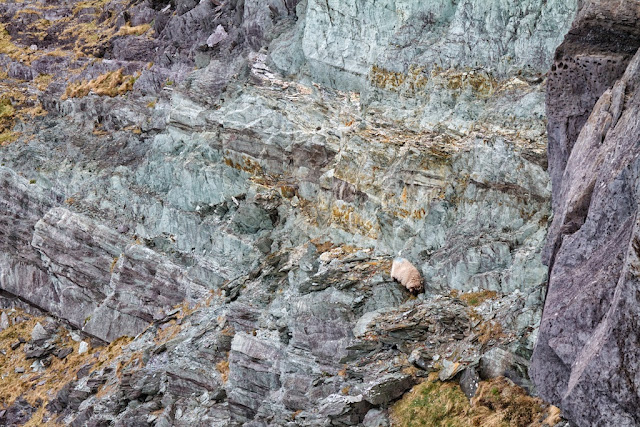 We walked around to a ledge which was above where we had seen the sheep, but we couldn't see it when we looked over the edge.  We kept moving along and eventually we did spot the sheep, still quite happily munching away.  This next photo is looking back to where we had been stood behind the fence.  Looking very closely I can just spot the end of the fence at the very top left of the photo.  We're looking to the South towards the peninsular which includes Mizen Head, "Ireland's most Southwesterly Point" 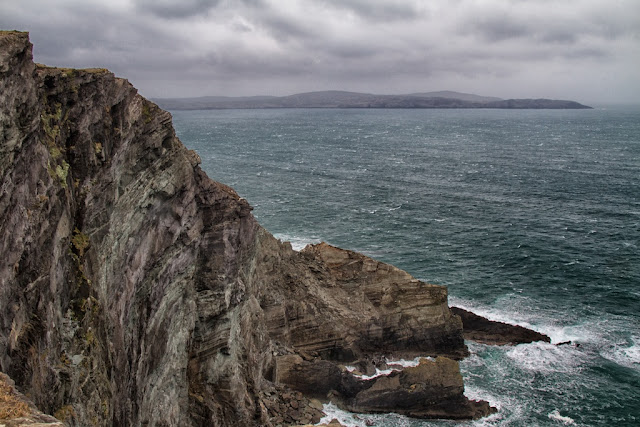 We rejoined the path an continued to head towards the lighthouse.  The paths were quite well marked with these black posts with the yellow arrows.  In this photo we are looking down to a circle of small white stones on an area of grass.  I did wonder if that was all that remained of the lighthouse as that is where the sign appeared to be pointing.  There was a line of posts carrying electric cables so I guessed that maybe they would lead us to the lighthouse.  The photo is looking almost due West so the next point of land would be the East coast of America 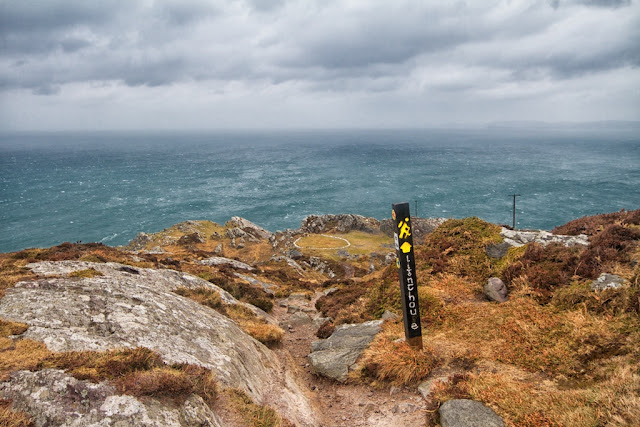 There was a gap in the rocks next to the circle of stones which we went through and continued down the path.  Around a corner and we caught our first glimpse of the lighthouse and the electric cables heading down to it.  We scrambled down the slope and came upon a long line of steep steps going down towards the sea. 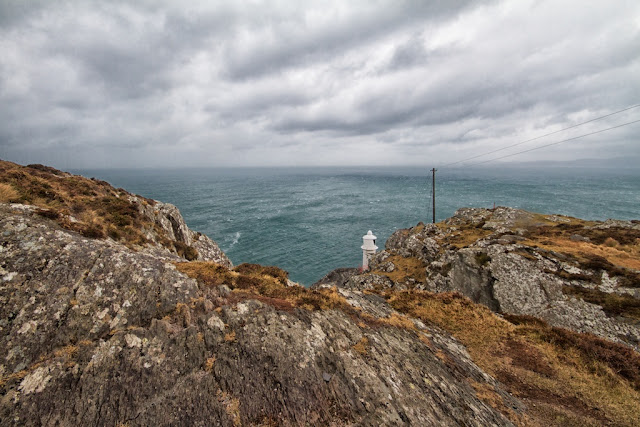 At the bottom of the steep steps was a flattish path and then the steps back up to the lighthouse itself.  Here's Lynne heading up the steps.  We stopped for a while and took in the view from next to the lighthouse.  Throughout the journey we kept having heavy rain showers and quite a lot of my shots were spoilt by having rain drops on the lens but these things happen.  After leaving the lighthouse the rain started to come down harder so I had to stow my camera away for a while and just pop it out to take a few shots when the rain eased off. 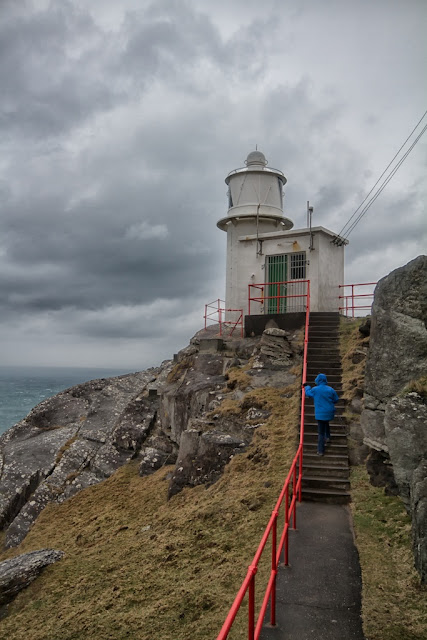 The return path was to the North o the peninsular and started in a valley between two ridges of rock.  The bottom of the valley was very boggy and the path criss crossed the valley trying to keep to the dryer parts of the valley.  As we were walking up the valley the sheep and lambs were making a lot of noise as we kept accidentally separating the lambs from their mothers.  These two little ones were desperately looking for their mother who was behind us and calling to them. 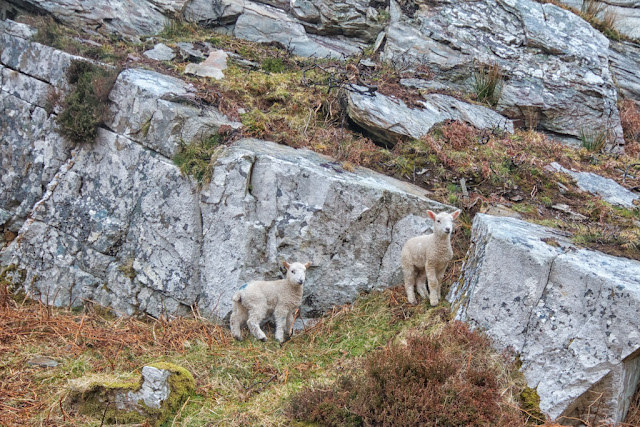 At this point the Northern ridge of the valley disappeared and we had a view of the cliff faces into Bantry Bay.  There were quite a lot of seagulls flying about the cliffs and perched on the rock face.  I took a few photos of them but I wasn't happy with any of them but this photo isn't too bad.  There appeared to be a bit of a cave at the base of the cliff but I didn't feel brave enough to lean over to get a shot of it. 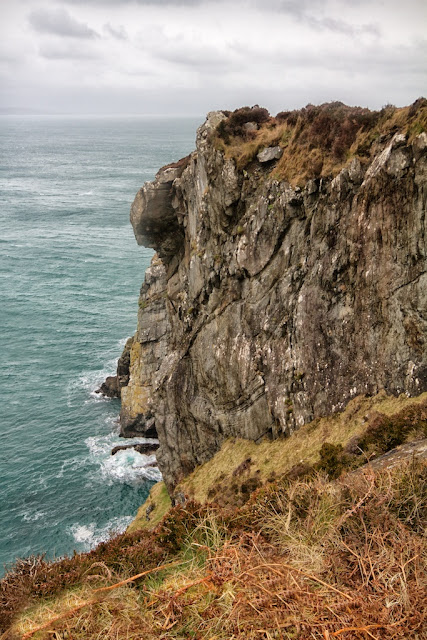 The rain was coming down harder as we headed towards the path which cut back across the peninsular and towards the car park.  Here is one of the old abandoned cottages that litter the peninsular as I found during the week in the area.  There was a big raindrop near the centre of the photo so I spent a bit of time cloning it out but I think it turned out OK.  The sky was pretty blown out but there was nothing much I could do about it.  Thinking about it, perhaps I could have replaced the sky to put a bit of interest in it rather than being so bland. 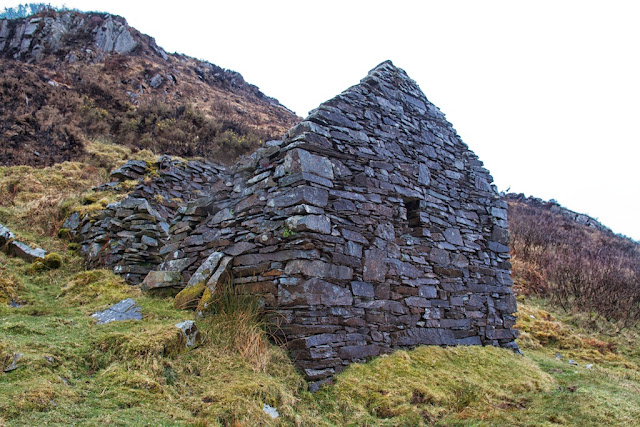 As we got closer to the car park the weather improved and turned a bit dryer.  Then in the middle of nowhere we passed a field with some cows and calves but we couldn't figure out how they got there.  Lynne suggested that they must have dropped them in from a helicopter or maybe a UFO.  Seems unlikely but it was a bit of a mystery. 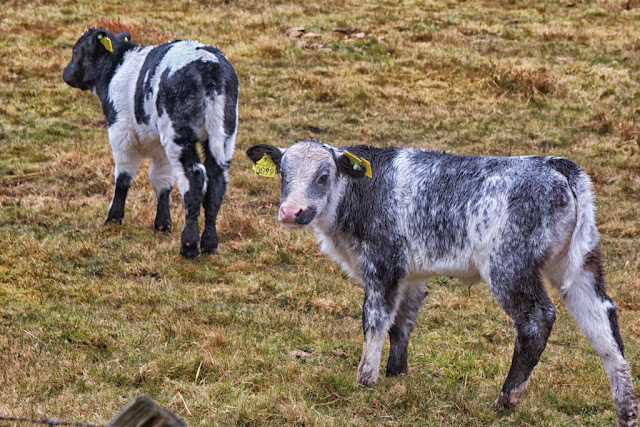 When we got back to the cottage we had a bit of lazy time as the walk had been quite hard in places and we'd spent quite a few hours travelling to the cottage on the previous day.  More photos soon.
at April 25, 2013

Gorgeous pics Colin, it looks like a lovely part of Ireland. Dan has been to Kinsale before and keeps threatening to take me there. I think I'll take him up on the idea now!!!!
Liza