Long time, no blog.  But I'm back and making up for lost time.  I've had lots of issues and excuses and as I do a catch up I'll maybe mention them.  So my last post was the snow on Christmas Eve, and since then it's snowed a lot more, in fact there's still the remains of the last snow up on the hills near to home.  For Christmas I got a Lensbaby Fisheye attachment and a few days after Christmas I took it out for a walk around Ingbirchworth Reservoir.

So what is a fisheye lens, well it's very wide angle at around 12mm and it's heavily distorted, especially around the edges.  On a camera with a full frame sensor the image from the camera would be circular but on my cropped frame camera I just get the corners with an extremely dark vignette.  This first image is one straight from the camera with just the standard adjustments. 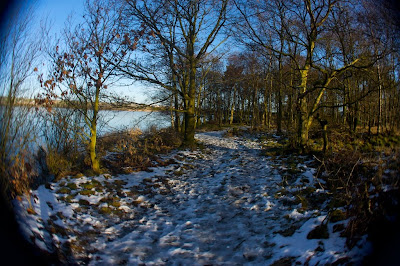 Now I do have a normal wide angle lens which will go even wider than this fisheye, so why would I want to use a lens with so much distortion.  Maybe I'm being fanciful, but let's call it art.  On the rest of the images I have cropped out the corners as much as possible but there's still quite a bit of distortion on some of them.

It was a beautiful day on the walk with no wind and a clear blue sky.  Still some of the Christmas Eve snow was on the ground and pretty much frozen solid.  One of the other things that the Lensbaby Fisheye has is very little protection from glare so on this next image I've used that characteristic to enhance the sun and its refection. 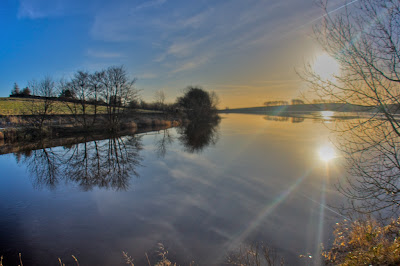 The surface of the reservoir was like a giant mirror and was making perfect reflections of the sky and the trees on the opposite side of the reservoir.  The next image has a bit more glare and also some chromatic aberration around the tree on the left of the image.  If you click on the image and look closely you can see that one side of the tree has a red line and the other side of the tree has a blue line.  This effect it caused by the effects of frequencies of light bending at different amounts through the lens and could be processed out, but I decided to leave it.  The image also shows the distortion a bit more where the straight airplane vapour trail is curved across the sky. 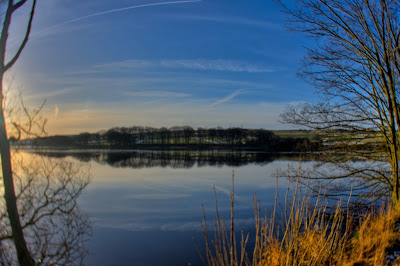 The next image is at the top end of the reservoir where the main stream comes in under the bridge.  Not much distortion visible on this image but a but more evidence of blurriness around the edges in classic Lensbaby fashion.  Not as much blur as a normal Lensbaby but it's still there. 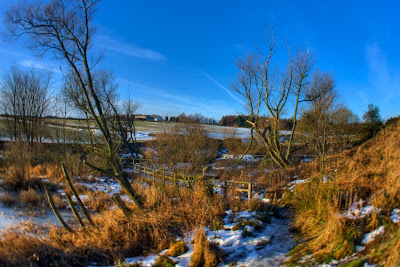 Here's another similar image in portrait this time. 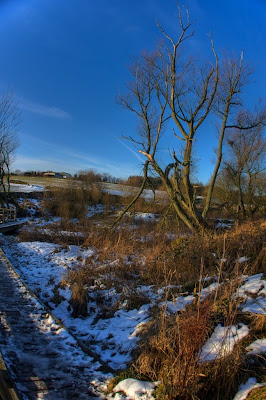 The next image is really showing how the lens bends the straight lines at the edge of the frame.  The trees on either side of this picture aren't bent anywhere near the amount they appear to be.  I love the way the son and shadows have a big effect on the colours and contrast in this image.  The curved tree trunks feel to push the eye into the centre of the image and hopefully down the path through the trees. 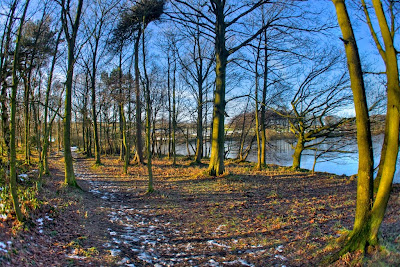 The final two images are a couple of trees that I took the following day near to home.  The weather had become a bit overcast and grey and misty but the snow hadn't returned just yet.  The fisheye lens really do make the tree look a lot rounder in shape than they really are.  In this first image the wall in front of the tree is actually straight. 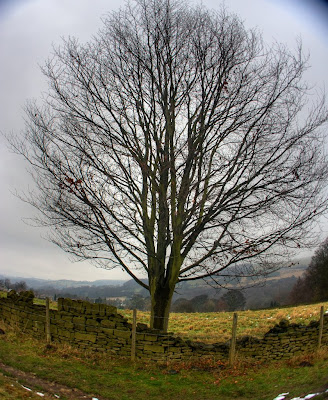 And the final image is another tree, this time in front of a wall. 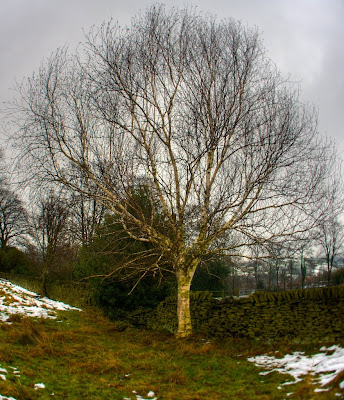 So what are my thoughts on the fisheye lens?  I think in the landscape shots it's often hard to distinguish from using a normal wide angle lens and it doesn't give as good a quality image, but sometimes the distortion can help the composition.  As with all the Lensbaby system it gives the photographer (or me) something to think about when creating images.  I don't think I'd want to overuse it but it's always there if I want to try something different.  Well I guess I need to do some more experimenting.  I've found it's possible to focus very close to objects so I think some very odd looking distorted macro shots might be possible.

Next time we move into 2010 with some snow, some more snow, and even more snow.  The coldest winter in the UK for over 30 years plus several issues stopping me processing my photos for a while.
at March 09, 2010

Wow! A blog entry!
I like pic no 3 best because of the curve of the trees round either side of the picture. Very arty farty.