So we move on to early January and we have more snow.  My main problem is that I've run out of drive space on my computer.  The internal drive on my Mac has a 500Gb drive and then I have an external 500Gb to use as the backup.  I've cleared down my reject images a few times but the space I make soon gets eaten up again with new images.  I decided to get a 1Tb drive to use as my backup and then archive my older stuff onto my current external drive to clear the space on my internal drive.  I really need to use the internal drive as my working drive to get any decent performance.

I use Apple Aperture as my image management and post processing software and keep all my image files in a single aperture library because it's a pain switching libraries in Aperture 2.  So I had to move all my old images onto the archive drive and start a new library with my new images.  Once I'd moved all the libraries around I could then organise backing them up to the new drive.   Fortunately since I first moved all my files around I have purchased the Aperture 3 upgrade so now I can easily switch libraries on the fly (more of that later).

Anyway on with the pictures.  So it started to snow again and the first image (and most of the other ones) is out of my lounge window.  It was snowing very hard, it was quite dark and I decided to convert the image to black and white as there wasn't much colour anyway. 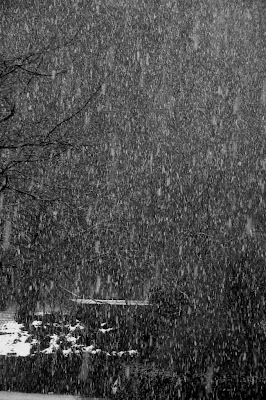 The snow didn't continue for long and started to melt quite quickly this time.  After the snow had stopped I went for a walk up the hill opposite the house and took this photo of the old brewery cart that abandoned in a field along with some other relics.  I had taken a picture of the dray a few weeks ago in the Autumn sun but I can't remember if I posted it anywhere. 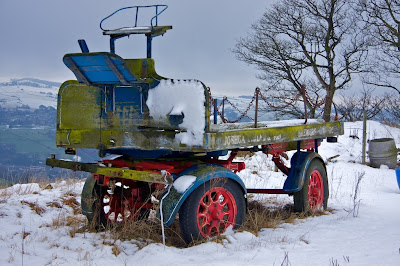 A few days later it snowed again but this time it was here to stay.  We have a couple of robins that come to our tree in the front garden, one it quite tubby and the other is quite slender.  I don't know if there are different types of robins or whether these are two that have just lived different lifestyles.   This is the tubby one, a picture of the other one is further down the post. 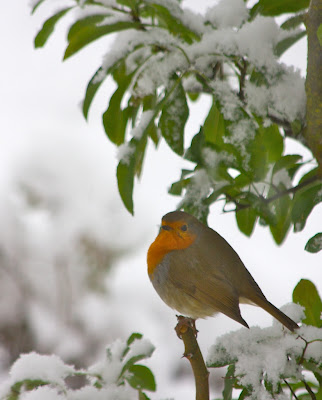 It's still snowing quite hard and I moved upstairs to take some shots out of the bedroom window.  My car   is quickly disappearing below a white blanket where it stayed for about three weeks.  Mazda MX5's are not good in snow and ice so I ended up car sharing with the wife until the snow subsided. 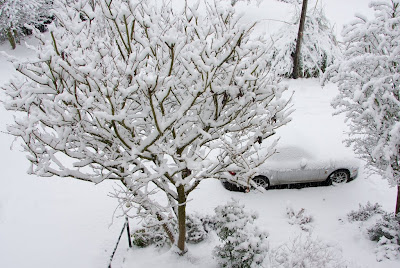 We had a lot of visitors to the feeders on the tree while it was snowing. The next image was a little blue tit. 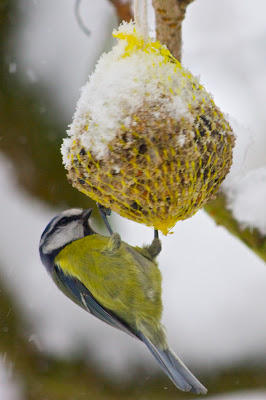 The we have a blue tit and a great tit sharing a ball. 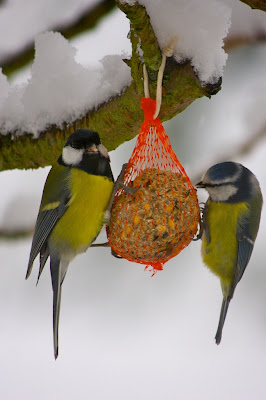 Next we have the slender robin standing and watching.  The robins don't do too well on the hanging balls an only occasionally use the feeder.  They tend to rely on the other birds throwing food onto the ground for them. 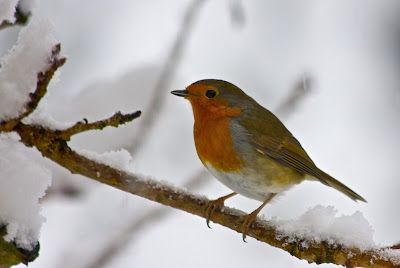 Then finally with the bird we have a great tit and a female robin sharing the feeder. 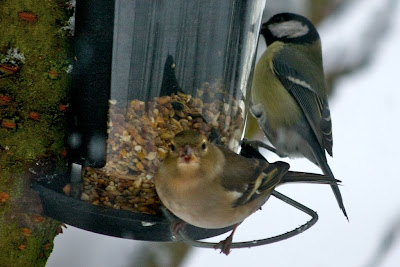 The snow eventually stopped and the ext couple of photos are into the back garden.  The first one is out of my study window. 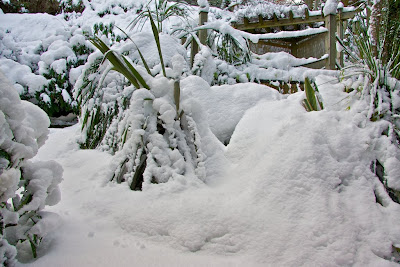 And the second is out of my kitchen door.  Most of the plants and shrubs are totally flattened.  Even now, two months later, the garden is looking pretty flat.  Quite a few pants are going to need to be replaced. 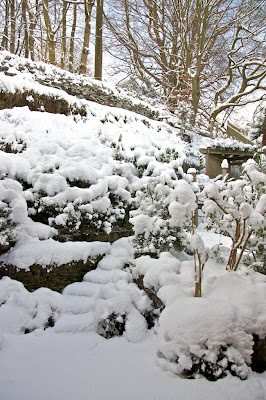 In the final image is looking across the valley and the sky is almost blue and the sun is shining.  Everything looks quite beautiful.  Next time, more snow. 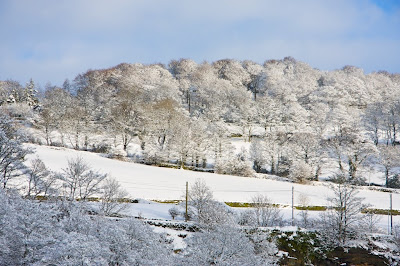