Well I had intended to get here before sunrise but I was very cold outside the bed.  The sky was a bit too clear for ay fantastic shots but I hung around for a while to see if anything caught my imagination.  The first image is from my favourite spot for taking sunrise pictures with the old stump in the foreground, then the water, trees and then the sky.  I have some images from here where the sky is beautiful and the water is perfectly calm and reflecting the sky very clearly.  This image is OK and even tonemapped doesn't impress. 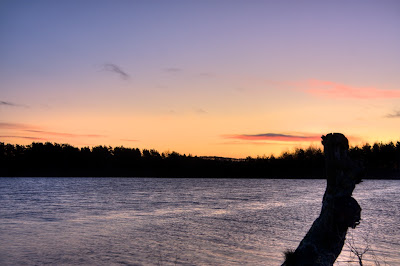 I turned around to look away from the sunrise and saw that there was a bit of colour in the sky behind me.  There was a lot more cloud in this direction for the colour of the rising sun to reflect from.   It was still quite dull so this was quite a slow exposure which emphasises the movement of the windmill blades on the horizon. 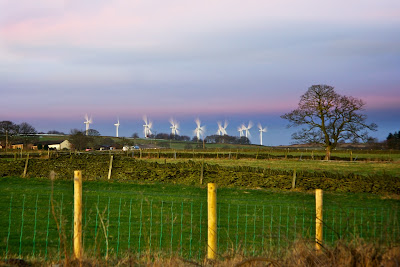 Looking back towards the sunrise the round sun was just clearing the reservoir wall and shining through the trees. 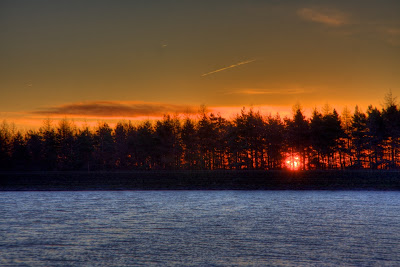 The clouds opposite the rising sun were becoming more colourful as the sun came up so I took the next shot looking across the reservoir towards Ingbirchworth village. 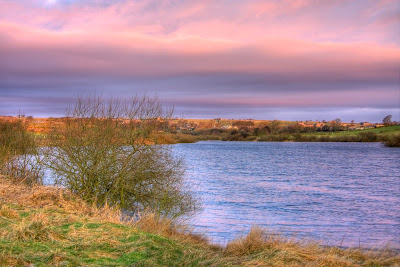 I walked a bit further up the path and looked back towards the sun again to take this wide angle shot.  I took the shot from quite low but when I got it home I decided to crop out a bit portion of the foreground to end up with this panoramic looking shot.

This is by far my favourite shot of the day.  The sun was rising fast and was now lighting up this tree in the field next to the reservoir.  I cropped the image quite a bit as the tree was bit of a way away but I didn't change to my longer lens for this one shot.  I also did some digital gardening to get rid of some mole hills in the foreground which I thought were very distracting.  I left the ones near the tree because I thought they just didn't distract as much and added a bit of context to the tree. 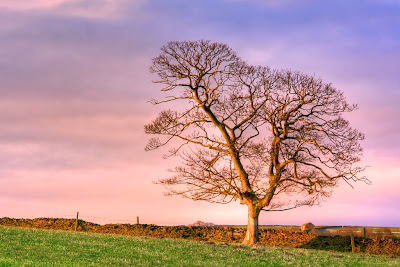 Just a few minutes later and another tree a bit closer to the reservoir but by now the pinkness in the sky has completely gone and the light on the tree has changed to yellow. 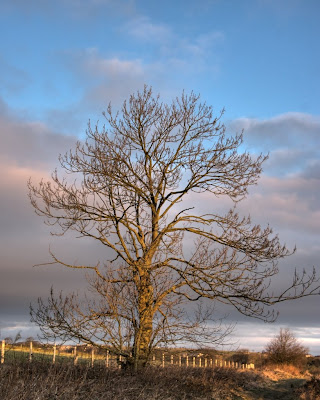 The reservoir was no longer frozen over but it is still very cold overnight and my eye was caught by the way the ice had formed on these twigs sticking out of the water.  As the ripples moved along the surface of the water they lapped up onto these blobs of ice which were a centimeter or two above the water.  The sun shining on them and lighting them up in a beautiful way.  Now I wish that I had a macro lens so I could get really close up and make an image concentrating on a single blob of ice. 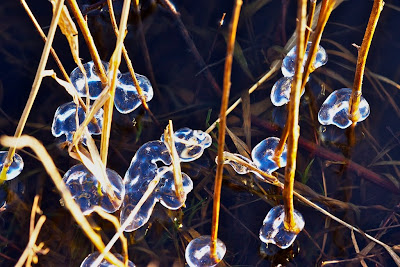 So I've only got to the end of January with my catching up so I think I need to go a bit faster with my posting.  The problem is there are too many distractions.  Maybe at Easter I'll get some time.
at March 25, 2010

Colin, your work is stunning! I love Mother Nature and Landscapes, they are the reason I started taking photographs and your work is truly an inspiration to me. I am now following your blog. Thanks again so much for the friendship & I hope to learn a lot from you.