I thought I'd blogged about Pots and Pans before, but looking back through my archive I can't see it, I must have dreamt about it.  Anyhow, last time I came here it was Remembrance Sunday and the place was packed with people having a memorial service and there was a brass band for the hymns.  Pots and Pans is a bleak hilltop above the village of Greenfield which is on the border between Yorkshire and Lancashire.  In the past Greenfield has belonged to both counties but I think it's back in Yorkshire at the moment, although it's in the Greater Oldham Metro so maybe it's in Lancashire.

We set off from the car park above Dovestones Reservoir and headed up the path towards Pots and Pans where I took this photo.  The water was fairly still so there a a bit of reflection.  The snow from January had not been completely gone and this was the second week in February.  It was pretty cold so we were wrapped up warm. 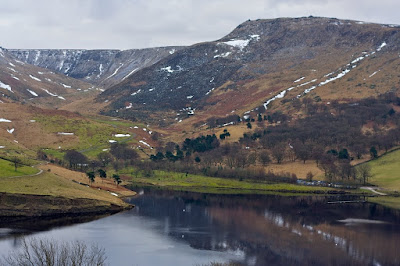 A little further up the path we encountered a very brave sheep on it's own.  He or she posed very nicely for this photo and allowed me to come quite close up. 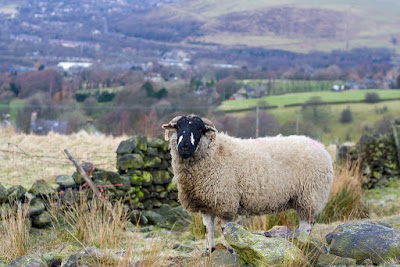 Again a bit further up the path and my daughter spotted a lamb with in mother out in a field in the distance.   I swapped my 50mm lens for my 70-300mm telephoto zoom to try and get a decent shot but I don't think I was too successful.  It looks as if the focus is just behind the sheep so the sheep are a bit soft but the patch of grass and the rocks behind them are quite sharp.  Not much sign of camera shake though considering the exposure was 1/60th of a second which is quite slow at 300mm. 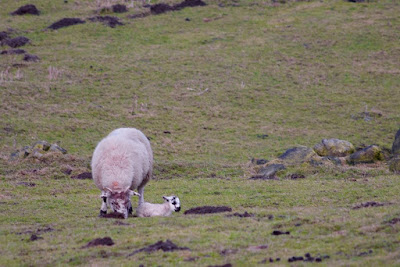 The next image is one of the old rocks with the holes in them that hold the water and the War Memorial in the background.  On Remembrance Sunday this area was packed with people but today it's deserted. 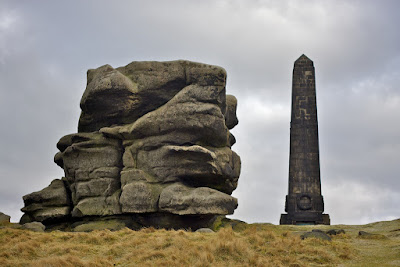 I climbed up the other side of the rock to take this next photo of one of the water holes.  As you can see it was frozen solid.  Legend has it that washing your eyes in the water from one of these holes will cure many eye diseases.  Not today though.  You might notice that the background in this shot is the same as from the first shot in this post, looking up the Chew Valley. 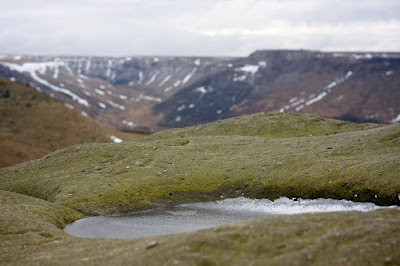 As we were hanging around here a group of walkers arrived and started to talk to us.  They were very friendly and one of the men offered my daughter and me a drink of hot tea from his flask.  We declined but thanked him, we had our own refreshments, although the thought of a hot tea on this cold day did sound nice.  Three of the women from the group climbed right up onto the top of the rock and so I took this photo of them. 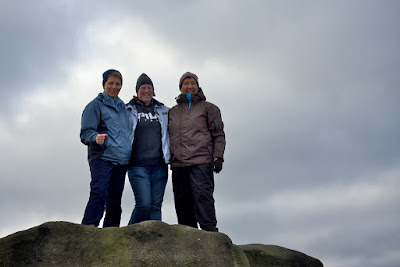 As we headed further up onto the hill I took one last shot of Pots and Pans.  The walkers had finished their break and were just getting ready to head off.  I'm not sure which direction they went but we didn't see them again on our journey. 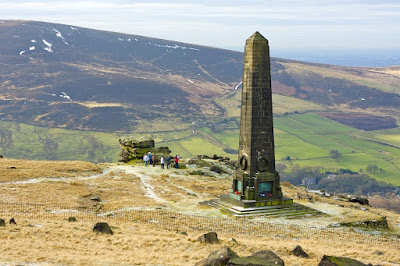 The last shot of the day was taken as we headed back down a different path towards the car park.  I heard the sound of the grouse long before I caught sight of it.  I tried to creep closer and closer to get a decent shot but it had obviously seen me and turned its back toward me.  Just after I took this photo the bird took to flight so this was as close as I managed. 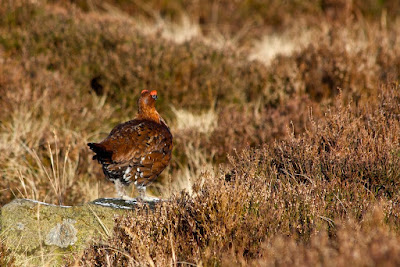 At home we had no hot water or heating after our boiler had been condemned by the gas inspector.  So after the walk I had a shower at my daughters house before going home.  It felt glorious after I'd had a week of daily washing in the sink full of water boiled in the kettle.  Fortunately the weather had been slightly warmer (still around freezing though) so we had just about managed at home with the help of the gas fire in the lounge and a fan heater for the rest of the house.  Next time, the snow returns.
at March 31, 2010