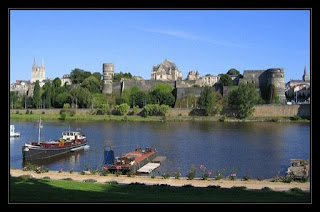 The tribe left the second gite yesterday morning to our very great relief. It's so peaceful here now and the weather has changed to being much more sunny and also a little cooler. Yesterday we went to the market at Angers which took a bit of finding which was strange as when we did find it it was massive. The flea market was mainly fleas but the fruit and veg was amazing, but unfortunately we didn't want any food. After the market we walked through a little park next door which had some beautiful gardens, a bandstand and a big fountain. I managed to take quite a few photos and some video of the fountain. Then we went to a creperie and had the gallette de jour and a bottle of cider de ferme which was great.

We wandered back to the car and drove a little way to the Lac de Maine which is a big lake just outside Angers. There is a big boating place and a beach area where people were swimming and sunbathing. Near the boating place we spotted a heron on a little jetty along with some seagulls. I managed to get a few photos of the heron before the gulls saw me getting closer and spooked it. There was another smaller lake next to the big one with a path around it so we had a little walk.

There was a big sporting area too with courts for different sports and a play area for the kids. Had an ice cream from the little kiosk as we hadn't had a pudding at the creperie. On the way back to the car the heron was in a smaller pond and I managed to get a few more shots of it before leaving. Back at the gite sunbathing and swimming in peace until after 8pm, it was a good day.

Glad the neighbours from hell have left you in peace! Weather not much so speak about here so I won't! Looking forward to seeing your heron pics when you get back :-)