Walk near the Sea in Dunmanus Bay

In the morning before we went to Bantry we had been for a circular walk near the sea between the cottage and Sheepshead.  The weather was as normal for the holiday so far being very dull, cloudy and intermittent rain but we were determined to make the best of it.  We started at  little car park at the side of the road and took a lane up the hill towards the sea.  At the brow of the hill I looked back inland and saw this clump of trees which looked very eerie in the mist. 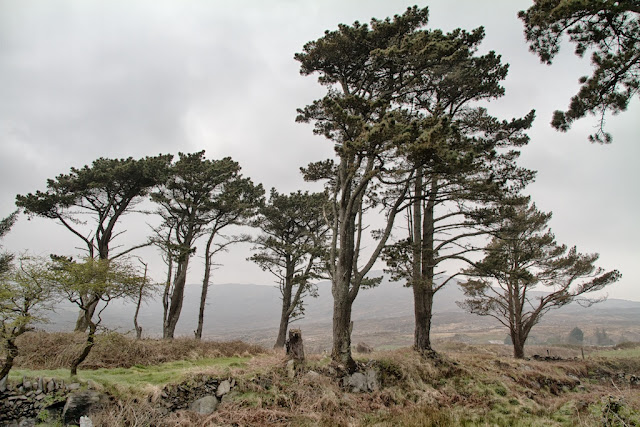 As we went over the hill we could see this tower folly further to the East.  I had to use a long lens to get this shot of the tower.  The mist was thicker out to sea and the land on the horizon is all but invisible. 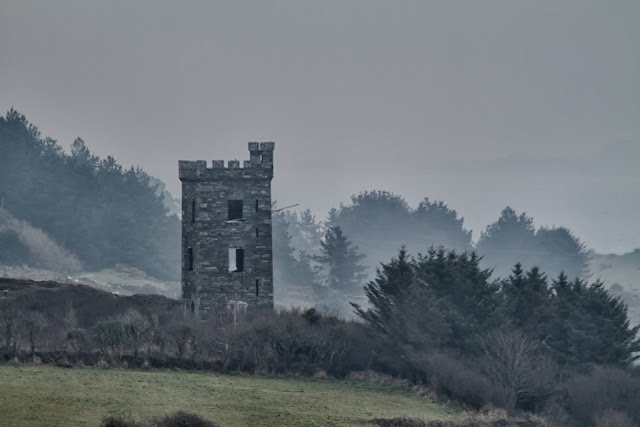 As we got closer to the coast I still had the long lens on my camera and I took this shot of the coastline near to the tower.  We could see the little peninsulas behind  the outcrop of land.  The land on the other side of Dunmanus Bay is slightly more visible than before so maybe the mist was clearing a little. 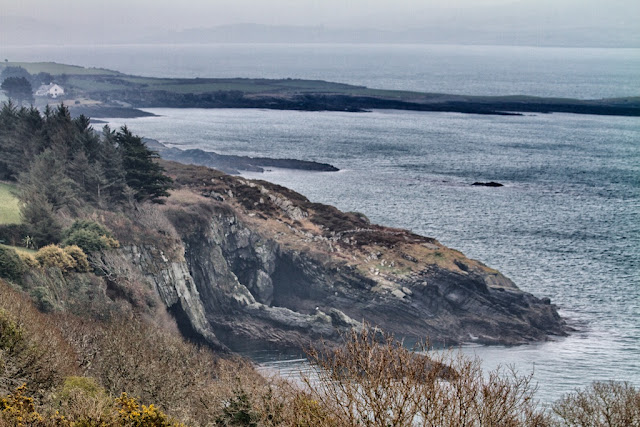 Towards the West side of the hill we could see the next little peninsular along the coast.  There was the remains of a small rough looking wall with this diamond shaped poking up at the top.  The textures in the stone and the colours were quite amazing. 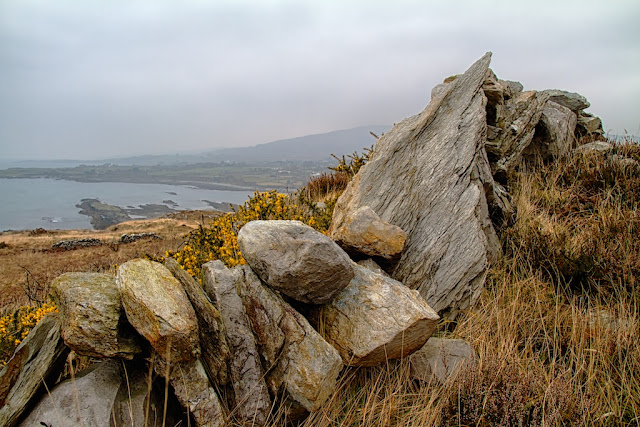 We made our way down towards a small bay to the top of this outcrop of rocks with a little rockpool.  Across the little bay was a peninsular with a little island at the end. 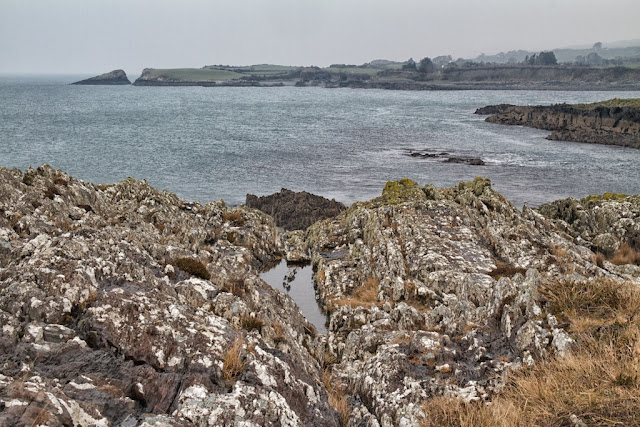 When we got to the bottom of the hill we climbed over some rocks towards this big rock pool.  The rocks were extremely slippery with the wet seaweed all over it. 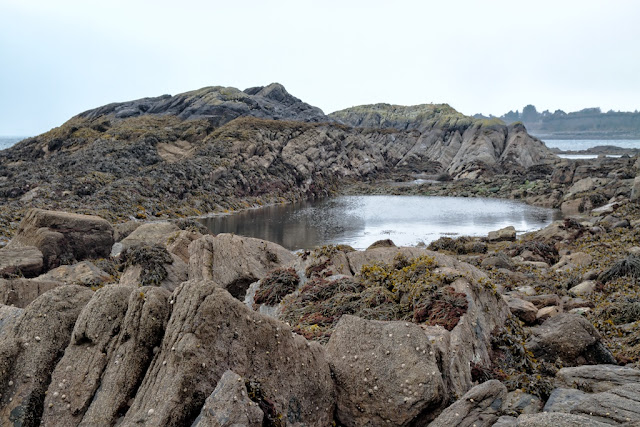 Further around the bay was an area of light coloured stone with a load of large pebbles.  The solid rock floor looked amazing with the long straight lines of different shades and contours.  I decided to make a black and white version of the photo so I could push the contrast even further.  Out in the distant horizon is the next peninsular along the coastline. 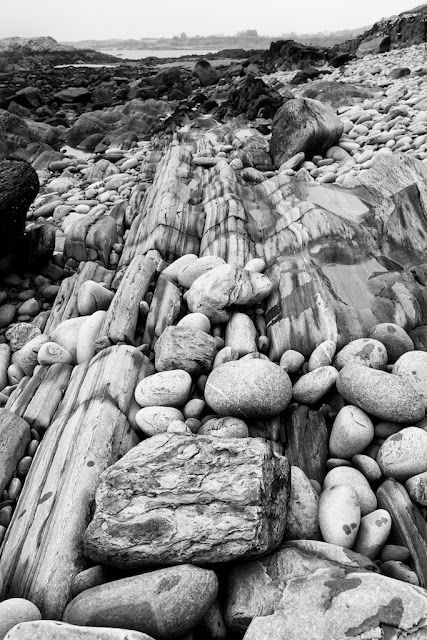 Around the bay was a lake which had a stream coming out of it and running down towards the sea.  Here's Lynne crossing this ancient looking stone bridge over the stream. 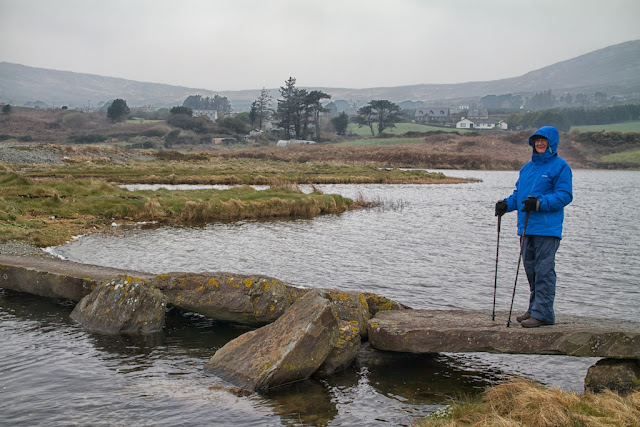 Further along the beach was another outcrop of stone, this time of a darker, softer looking stone with moss and seaweed growing on it.  There were more little rock pools all along the top of the rock.  To the left if the stream which we had crossed as it runs into the sea. 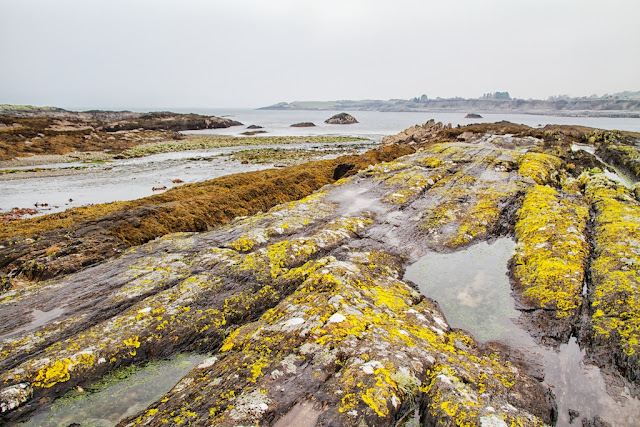 After leaving the bay we headed a bit inland on our circular journey.  As we went past a field we saw these three donkeys at the far end.  We called to them and they trotted across the field towards us.  Lynne was off to the right of the photo grabbing some long grass to feed them, so they were very interested in watching her very closely and ignoring me taking photos. 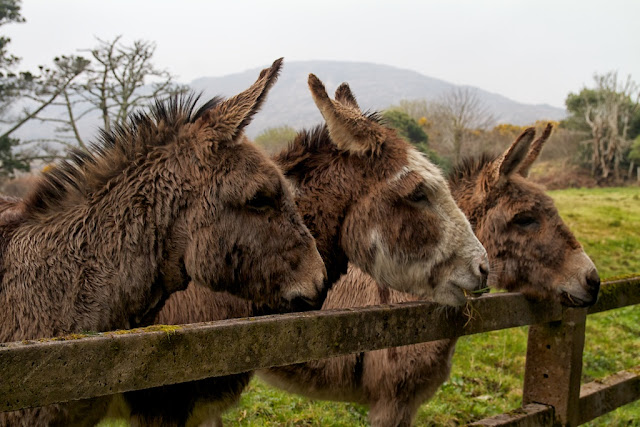 Near the end of the walk we passed by this odd looking rock next to a spring.  When we got back to the cottage and checked the map it was marked as a holy spring so I guess there was some religious past to this area. 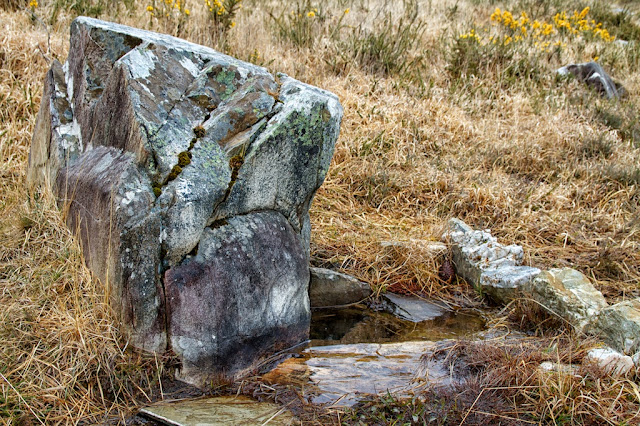 Next time we take a trip to Garinish Island which is in the inlet by Glengarriff.