We had a day off work on Monday and we went to Yorkshire Sculpture Park to see what the current exhibitions were and have a walk around the park.  We started off in the main visitors centre and up to the gallery where we found a space capsule and a couple of astronauts dressed in some fabulously colourful fabric.  The fabric looked like the heavy crazy colourful canvas that I would associate with African tribal wear.  This was our first view of the work of Yinka Shonibare MBE and it was the start of a journey into his amazing world of colour and spectacle.  The collection at the park is called Fabric-ation and I have to say I was absolutely blown away by everything we saw.  Here's a few photos of the astronauts. 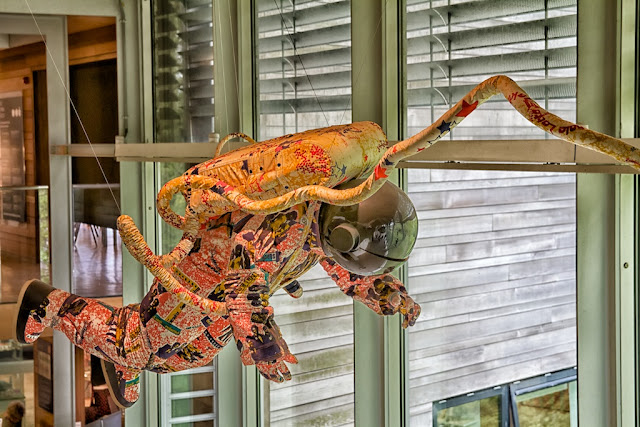 There's a couple of Joan Miro sculptures outside as a bonus. 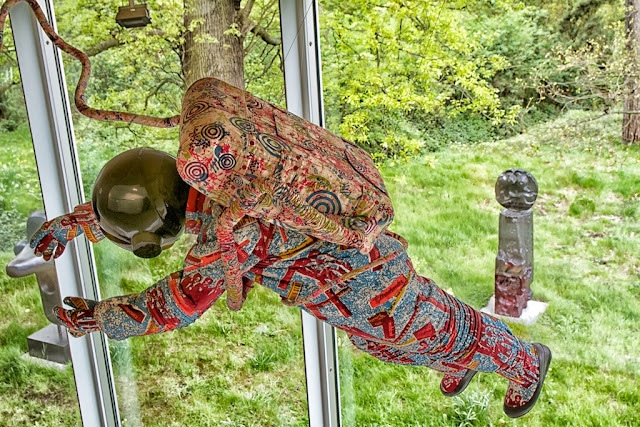 Looking back down the corridor next to the gallery. 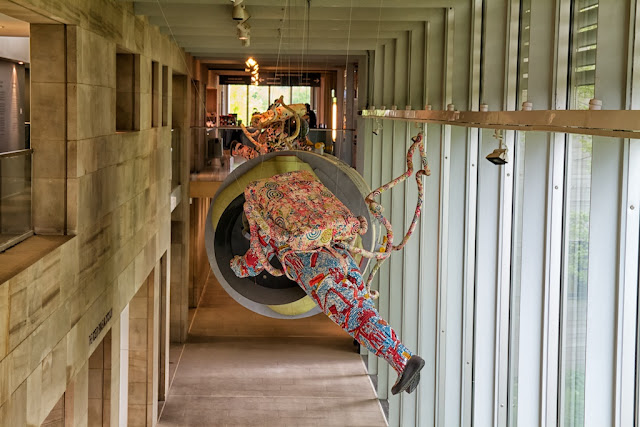 Looking up from below. 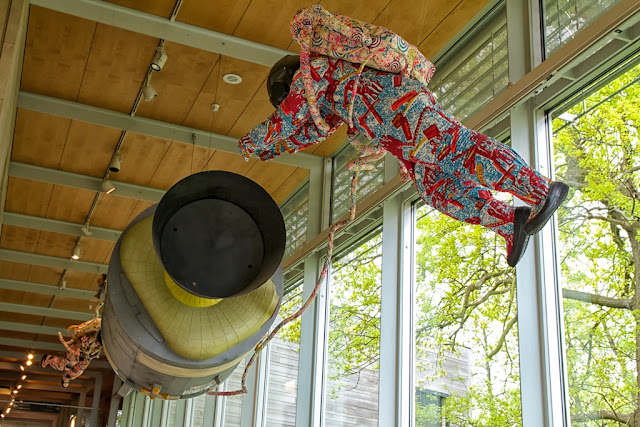 In the room at the end of the gallery was a ship in a bottle with the similar type of fabric in the sails and some big collages.  The collages contained a wide variety of images and writings and we spent some time looking closely at them, trying to take it all in.

After that we went down to the underground gallery (which unfortunately doesn't allow photography) and there was a big group of noisy people entering gallery behind us so we decided to go straight to the far end of the gallery to get away from them.  We passed by two foxes wearing beautiful costumes which looked Victorian but made out of similar fabric to the astronauts.  They had revolvers in one hand and Blackberry's in the other.  As we passed the other rooms we spotted a few other figures in similar costumes and at the end was a ballerina on top of a big black polished stone.

In the room at the far end of the gallery is a small cinema area which was running a film of people wearing the strange Afro-Victorian costumes at a masked ball.  They were dancing an interesting contemporary type dance which included the leading lady apparently shooting the leading man, but then he comes back to life.  In part of the film was a table laden with food intermingled with stuffed animals in a bizarre Tudor banquet.  We sat and watched the film for a while and were enthralled by the whole experience.  Some of the masks from the ball were in a glass case at the back of the room and it was amazing to see the detail at such close quarters.

We went back through the other rooms and each one had themes with the fantastic colourful costumes on the figures.  In one room two figures firing muskets at each other through a wall of eggs.  In another a large cannon appeared to have fired a massive pile of fabric cannonballs into the corner of the room.  In another room, one wall was completely covered in costumes and another had figures with different objects for heads including a tap running into a glass of water.  There was a series of large photos depicting a man in one of the costumes faking his own death in one of the rooms.  And yet another room had aliens made of fabric including a couple on old fashioned, fantasy flying machines.

Outside in the area around the gallery were a couple of very big sculptures which looked like pieces of the fabric being blown in the wind.  This first one was on the hill behind the gallery so the flat area at the other side of the little hedge is the roof of the gallery. 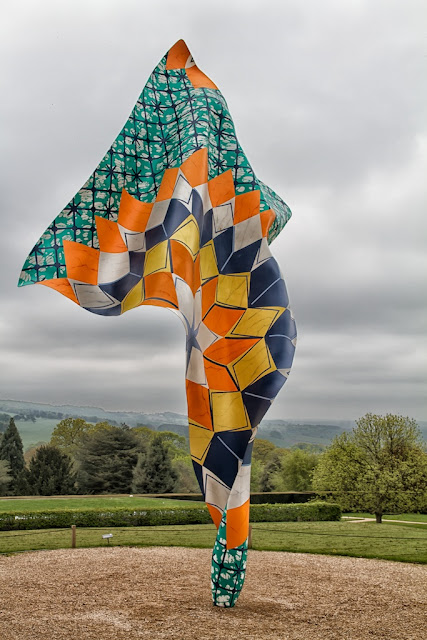 The second one was on the grass in front of the gallery. 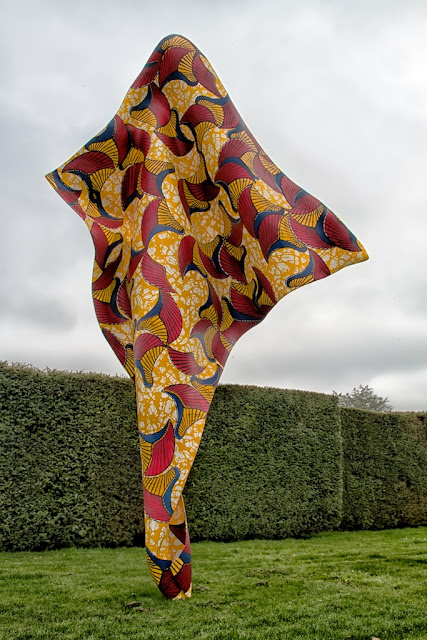 Here's a film by the Yorkshire Sculpture Park where they are talking about the artist, the artist is talking about his life and work and they are showing some of the sculptures which we saw in the gallery.  It's nearly 15 minutes long but it's very interesting and shows some of the beautiful things that we saw.  As always when I blog about the park I urge you to visit and experience the artists work first hand.  I can assure you you won't be disappointed.