Back to our visit to Ireland.  We went to the town of Bantry, which seems to be the main shopping town in the area.  It's just a ten minute drive from Durrus on the Northern side of the peninsular and at the head of Bantry Bay.  We parked the car in the main square and had a wander around, taking in the sights and the shops.  In the square was this big old anchor with the main shopping street behind. 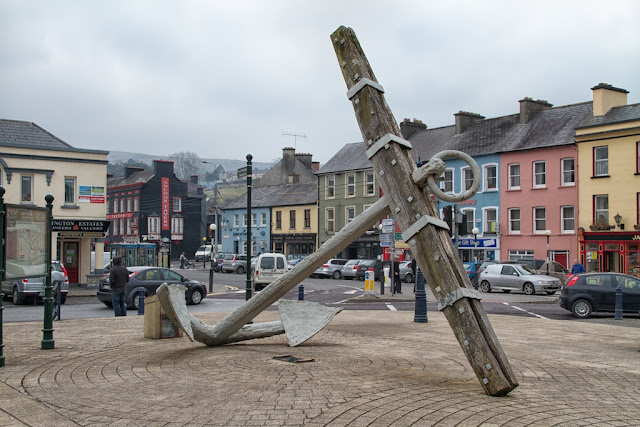 At the far end of the main street was a bit of a hill and the library.  In front of the library was this water wheel.  A bit random but I spent a while photographing it from different angles while the girls where looking around one of the bigger gift shops. 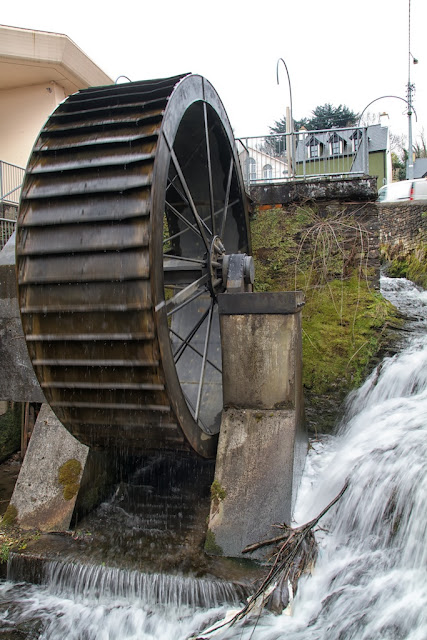 I needed to dodge the traffic a bit as the road was a bit narrow and there was several buses and trucks going by.  I took this photo leaning over the wall next to the road to try and get a close up of the wheel.  I converted it to black and white and tried to bring out the drips of water flying from the waterwheel.  I wasn't convinced that the water was actually turning the wheel as there was a big box which the axle went into which I think had a motor in it. 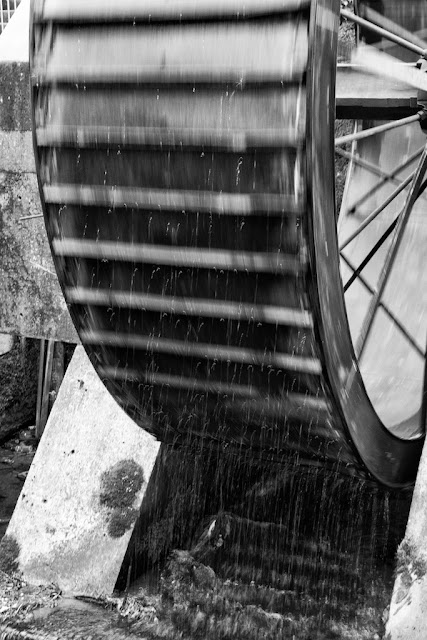 Next to the wheel was this waterfall down a steep rocky slope.  I slowed the shutter speed to make the water look smooth and converted to monochrome again to get rid of distractions.  I also tinted the image with dark blue using a cyanotype filter which also adds a bit of extra contrast. 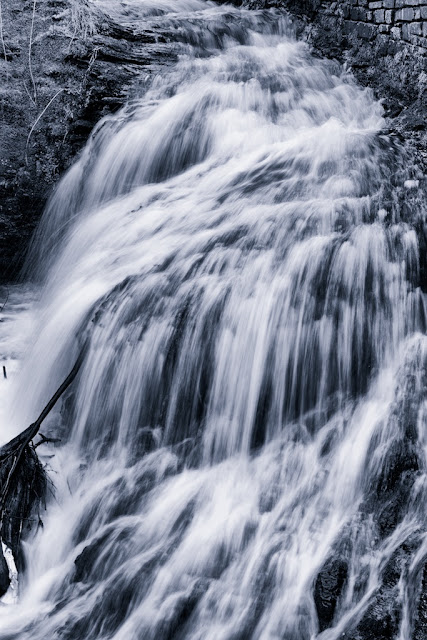 In this next photo I moved around to the library side of the wheel and slowed the shutter speed even further.  Now the spinning water wheel has lost the spokes and the paddles are nice and motion blurred.  I left this one in colour to show the variation in the brickwork of the wall behind the wheel. 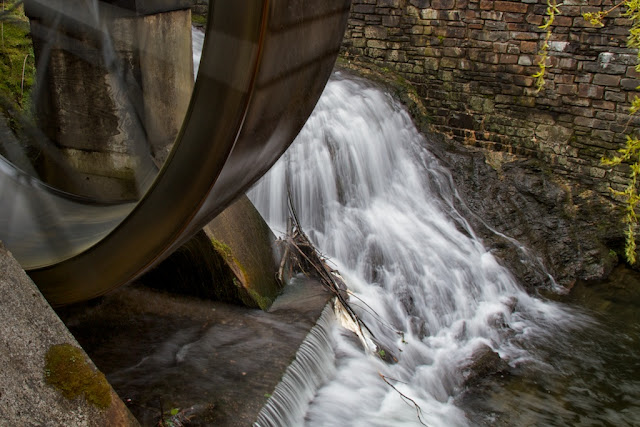 At the top of the waterfall was this weir which was in two pieces at an angle.  Above the weir was a stretch of smooth water but I couldn't find a good spot to get any decent reflected images. 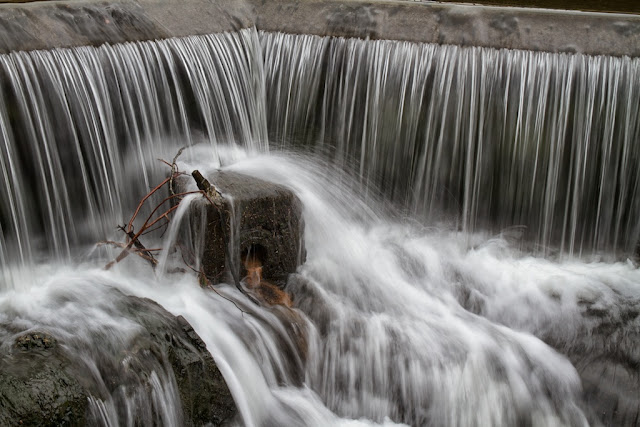 When the girls came back out of the shop we carried on walking around and on the way to a pottery shop we passed by the painting on the end of a building.  I thought it was quite pretty and I loved the way each of the letters has parts of landscape painting in them too.  I wondered if the main picture was looking down towards Bantry from the hillside behind the town.  There looks to be a harbour and to the South could be the Sheepshead peninsular and possibly Whiddy Island where there is the oil terminal. 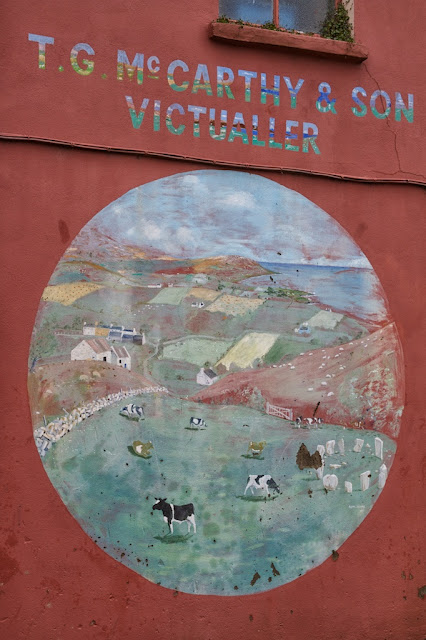 After that we walked down to the harbour but there wasn't any ships to be seen, just this cygnet with it's brownish feathers. 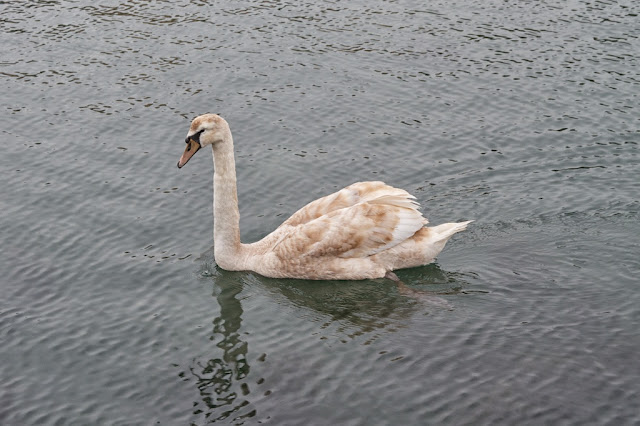 At the harbour end of the main square was this statue of St. Brendan the Navigator. 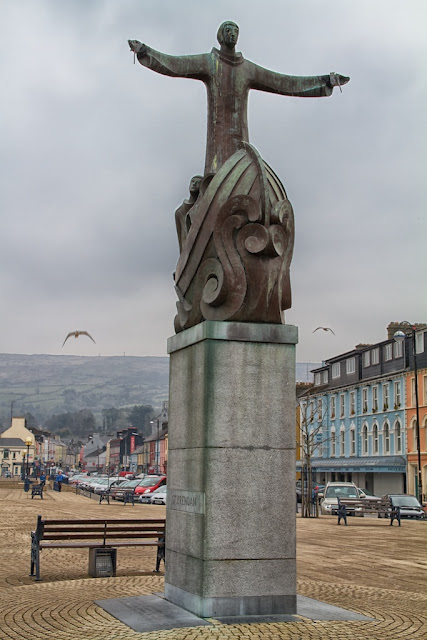 I quite liked the pattern in the paving stones of the main square and the fancy street lighting.  The photo was taken from near the statue looking towards the big anchor and out to hillside behind the town. 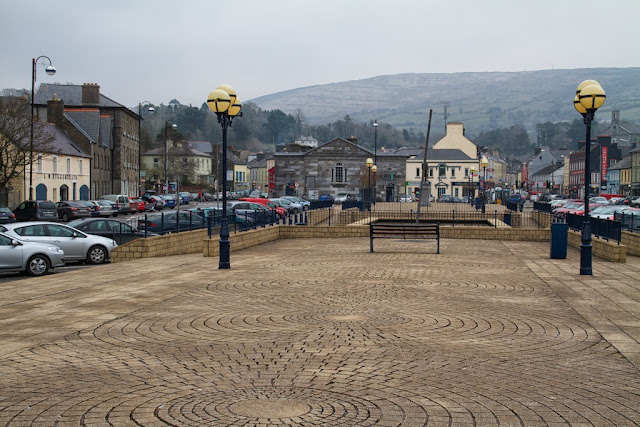 Adjacent to the square is the church which is also named after St. Brendan the Navigator.  I guess he must have been someone important in the history of the town.  Next time we went for another walk in the less than perfect weather. 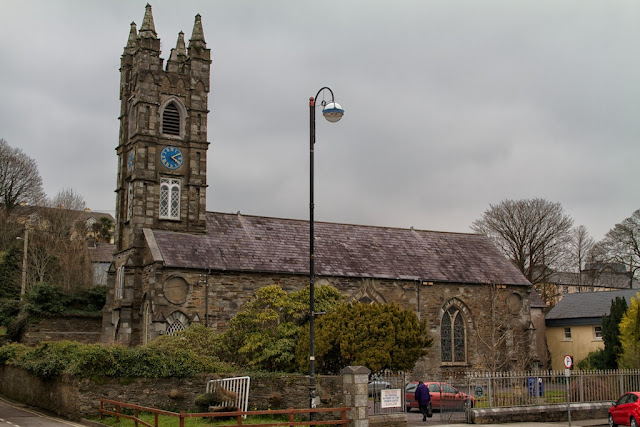