After the excitement of Ginny Walking the Dales it's back to the holiday photos. So after leaving Honfluer it was on to Fougeres which is near Rennes. It was out intention to use this as a base to visit Rennes but we liked it so much here that we never made it. The journey down to Fougeres was uneventful but the temperature was definitely rising as we moved inland. I had picked a small hotel right in the centre of the town and when we arrived it was very pretty. The only problem with it was that out room looked out onto the Belfry which we discovered chimed every quarter hour all day and, more significantly, ALL night. 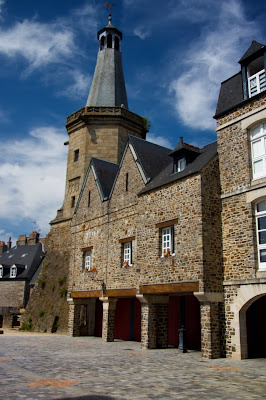 At the top of the street where the hotel was there is a beautiful church with some lovely gardens and a bandstand. We decided that we'd like to sit in the gardens and read before we went out for dinner tonight. But first we had a bit more of a wander around to see what there was about. 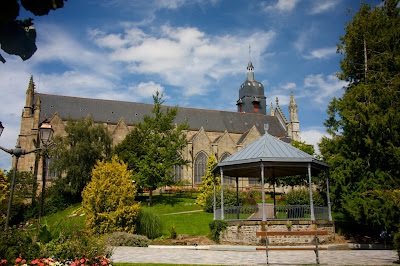 This second shot of the church was taken just a little further around the pathway. 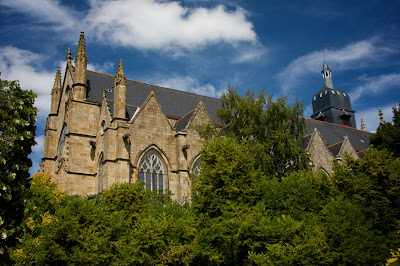 There was a wall at the edge of the garden from which there was a lovely view of the old town down in the valley below. The next photo is the Chateau which they claimed was the biggest medieval castle in Europe. We had planned to visit the chateau in the morning before it got too too busy. 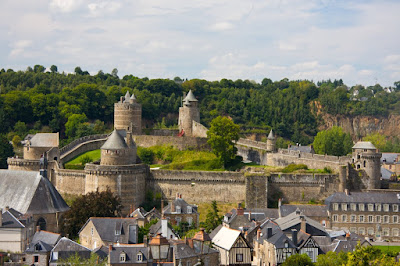 To the left of the chateau was the cathedral and some more of the old town. 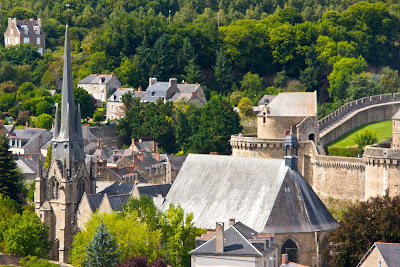 Further around in the gardens was this big butterfly made with flowers. When we returned to the garden with our books to read there were quite a lot of people also sitting on the grass in the early evening. There was also a large group of young people who had brought out some chairs from the bandstand to sit on. After we had finished reading we noticed that the young group had returned the chairs to the bandstand and stacked them up neatly. We thought this was quite refreshing that they had so much respect for the gardens. 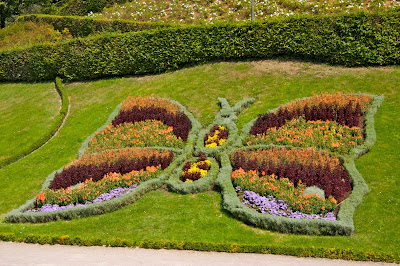 The following morning it was really hot and there wasn't a cloud in the sky. On the way down to the chateau we walked along this stretch of city wall with this little tower on it. Out of the picture there was a load of scaffolding holding up the wall and tower so I guess it wasn't in that good a shape.

Around part of the chateau was a quite big moat which I used to get this reflection shot of the walls and towers. The water was a bit brown and dirty but it didn't show in this image. 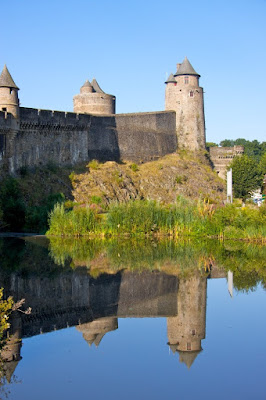 Inside the chateau there was quite a mixture of buildings, trees and piles of rocks which had been part of the chateau.

In some of the buildings there were some picture shows an other exhibits that were quite interesting. This piece of film was all about when those English came over and invaded the chateau, killed all the soldiers and burned down the town. Come on guys, get over it, it was hundreds of years ago. And anyway we built most of the castles in this area of France in the first place. 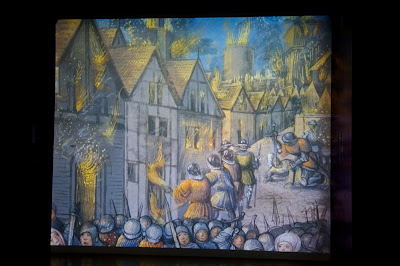 We climbed to the top of the highest tower where we had a great view of the whole of the chateau and the rest of the town up the hill. You can just see the Belfry on the horizon. Unfortunately this shot was straight into the sun so doesn't really show the view off as well as it could. We were very, very hot by the time we'd gone up all of those stairs. 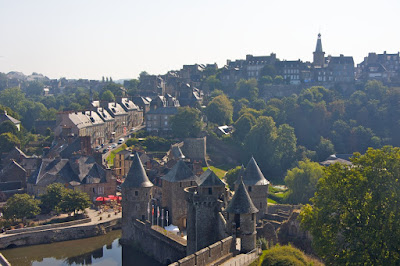 This next shot is of the two highest towers and it was the left one that we'd just been to the top of. They believe that the area in front of these towers are the footings for what was going to be an inner fortification which they never got around to building. 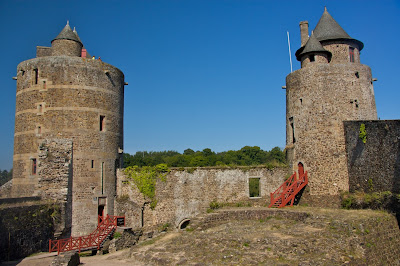 This next shot is from outside the chateau looking across another part of the moat. 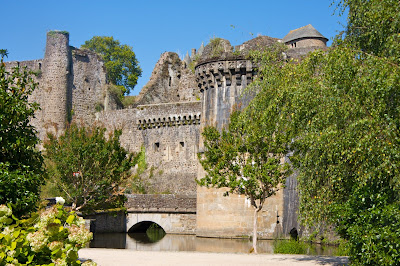 And this last shot was of the river that flowed next to the chateau. 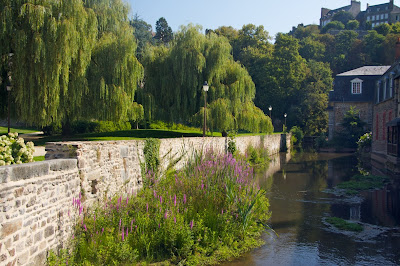 In the afternoon we went for a walk around a nearby wildlife reserve. To be honest it wasn't much of a reserve and we didn't see much in the way of wildlife so there wasn't any photos worth putting into the blog. It was still very hot and we were glad that a lot of the walk was shaded in the trees and that we had plenty of water with us.

Later we went back to the church gardens to read again and then out for dinner. The next day we were setting off to the gite where we would be having more of a restful time.
at September 08, 2009