We left the gite on the second Thursday of our holiday and started to head back towards the ferry at Calais. Our first stop was the little town of Les Andelys , south of Rouen, which was situated on a large bend of the river Seine. We chose this town because it was a good way towards out last stop at Arras and there was a small cheap hotel there. The bend in the Seine has dug into a plateau on the outside edge, exposing some white limestone cliffs along the bank. In the top of the cliffs is a ruined castle which was used by the English to prevent supply ships going up the Seine from the coast to Paris.

We've been to Rouen many times on our trips into France but have never stopped anywhere in this area before. Les Andelys itself is a bit back from the Seine up a narrow river valley and is quite small and fairly ordinary. The exception was this lovely church which, like many small towns in France, is far bigger and grander than you'd expect. 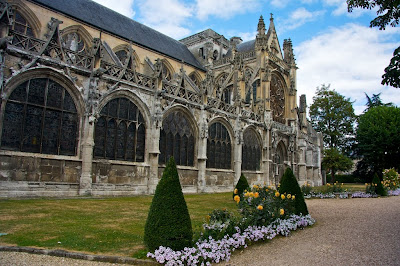 Above the main entrance is a beautiful relief carving depicting scenes from the bible. Inside there was quite a mixture of stain glass windows including this bright, modern looking one. 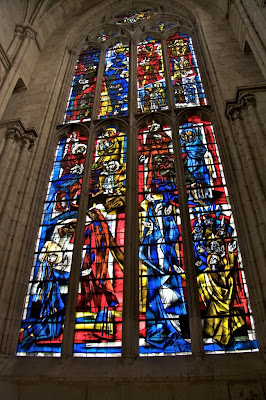 The old town area is called Petite Andelys and is the part which is actually on the banks of the Seine. Here there is another, much smaller church than in the main town. This is also the more touristy area with lots of nice restaurants and old timber framed buildings. 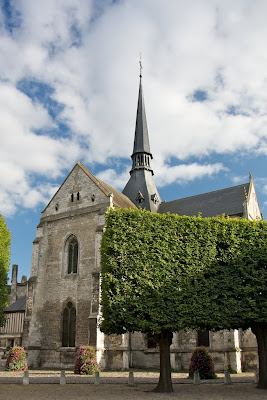 There is a path along the riverside which goes past an array of very different houses including this lovely big house with its balconies and shuttered windows. Some of the houses are much smaller and quaint. Further along the riverside is a big old building with a domed roof which we think was some kind of refuge but seems to now be a part of the new hospital. 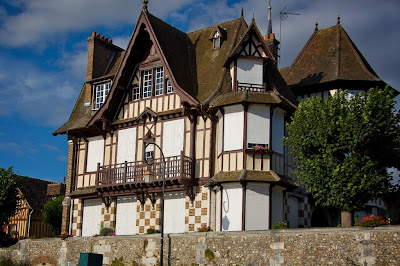 Looking up from the riverside you can see the old castle perched high on the top of the white limestone cliffs. Unfortunately the view is spoiled a little by the scaffolding where they are currently undertaking some much needed renovation work 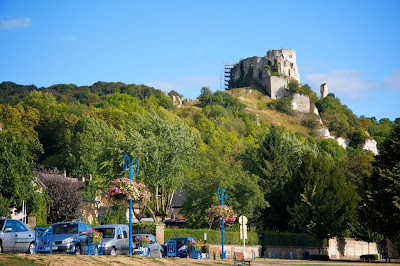 The following morning we made out way up to the car park above the castle. It seemed very strange that the castle wasn't on the highest point, but I guess then it would have been too far from the river. It struck me that it would have been too easy to have attacked the castle from this higher point on the plateau. However as you get closer you see that there is a very deep, steep sided ditch just behind the trees in the foreground. I guess that it would still be quite easy to throw things over the wall from the high point with some kind of catapult. 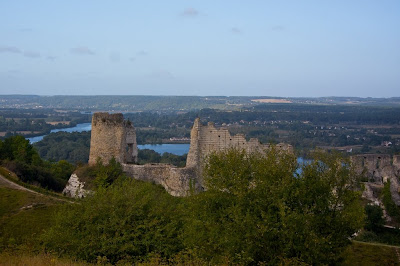 From the castle grounds there are great views of the river, the suspension bridge and the big barges going up and down. In the background of this photo looking South is a big lake next to the river and if you look on a map of the area there are quite a few of these lakes nearby. I'm not sure whether they are natural or man-made or what they are used for if anything. 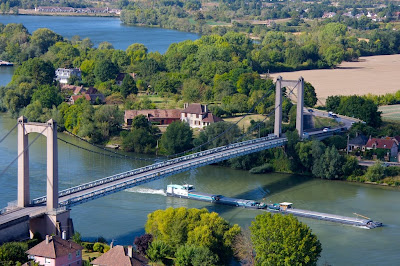 Looking North up the river you can see the big arc of white cliffs where the river goes around the massive bend. Apparently there was a smaller fort on the island and stakes set into the river bed to create a barrier. To the right of the river is the old town with the little church, further back is the domed roof of the refuge and the new hospital in the trees beyond. The riverside path goes way down the river to the next town. 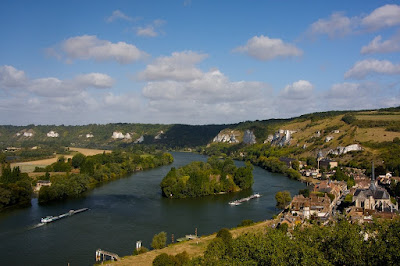 The castle itself is in pretty poor condition with the exception of the main keep in the centre. This is the only part that you have to pay to enter and it's not that exciting once your inside. To be honest they've tried quite hard to make it interesting and all the information boards are in English as well as French so that is quite good. The main story about this castle is how the French managed to take it back from the English by sneaking in through a low window into the keep. Those sneaky, sneaky Frenchies. 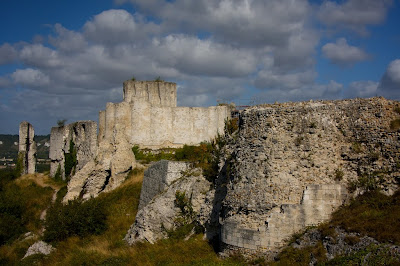 There are patches on the castle where the original finish has survived or been replaced during the renovations. 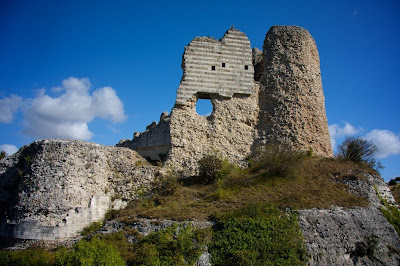 In foreground of this photo you can see where one of the towers has fallen against part of the wall. This was caused by attackers digging into the soft lime below the foundations and then lighting fires which then made the tunnels collapse and the walls tumble. 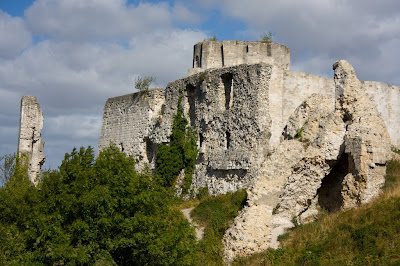