Ginny Walks the Dales for NSPCC and Childline

Well who'd have believed it, my daughter Ginny walking 25 miles for charity. I have to admit I wasn't convinced she'd do it, but you know I'm going to support her all the way. I was going to walk with her but she had some friends that were going to walk with her so I volunteered to help with the marshalling instead. Unfortunately her friends pulled out so she was left walking on her own.

My first duty was at a road marshalling point st Newby where I was directing the walkers onto the path to Ingleton. It was a 6am start and the morning was a bit overcast but was starting to brighten. Here's Ginny coming around the corner behind this trio who were saying "Why are you taking photos now, we've hardly got going". I said that I'd get them nearer then end when they needed a bit of encouragement. 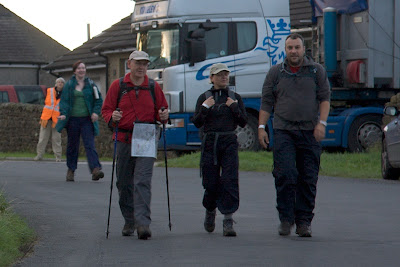 It was still quite dull so this picture of Ginny was a bit blurred but she's looking happy. 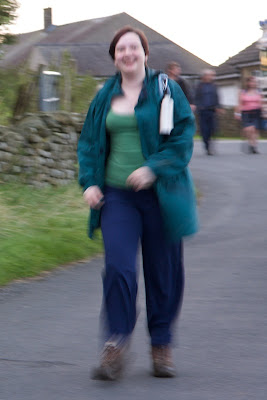 Here's Ginny joining the path to Ingleton with a couple of boys that she'd picked up. Not bad going we were only just over a mile and a half into the walk. 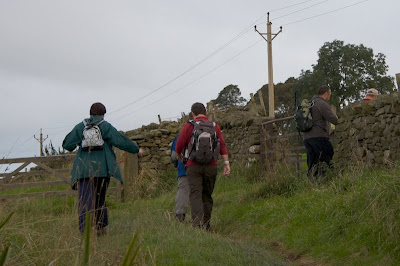 I completed my duty at this point at about 8am and the appearance of blue sky was promising a nice day for the walkers. 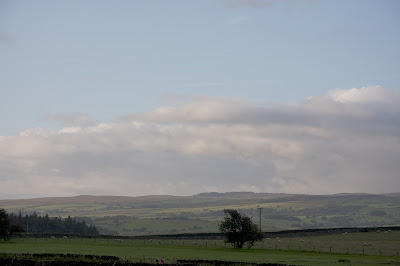 Unfortunately the blue sky didn't stay and at my next duty point at Checkpoint 2 the skies opened, the wind came up and it was pretty miserable. I had to put my camera away because I was worried about it getting damaged by the wetness. The checkpoint was about half way around the course and just as the walkers were coming down from the highest point at Ingleborough. The first walkers were reporting that the weather was foul up at the top so I was getting worried about Ginny. As more walkers got to the checkpoint the reports of the conditions were getting worse.

We were very busy at the checkpoint making hot drinks for the walkers and trying to cheer them up. The second half of the walk was a lot more gentle but after Ingleborough I don't think many people were looking forward to it. When Ginny came down she had a bit of backache but seemed very determined to finish. The waterproofs that she had borrowed and her new boots had kept her mostly dry and warm so she was feeling OK. I made sure she had a hot drink, some chocolate and a few minutes rest before she went on. Quite a few people had dropped out before reaching this checkpoint and a few more called it a day here and were bussed back to Clapham.

We had reports of a couple of young girls struggling a little way back from the checkpoint so a lady that was with the Ambulance and I walked back up the track to see if we could find them. When we got to them they were cold, miserable, didn't want to carry on and were moving very slowly. One of them complained that her legs were hurting her and the other had sore feet. Neither of them had any waterproofs and were obviously not prepared for the conditions. We walked slowly with them back to the checkpoint to make sure they were safe and put them on the next bus back to Clapham.

As the last few people got to the checkpoint the weather had started to ease off so I got my camera back out. This is the checkpoint where we managed to service the 400 plus walkers that made it to this point. The four girls on the right were the last to continue from here but their chances of getting to Checkpoint 3 before the cut off point was slim. It was about 6 miles and they had an hour and a half. It has taken them 8 hours to go 12 miles so I can't imagine they made it. 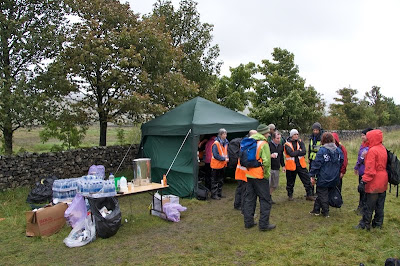 The army were the last people off the mountain. They had been there from 6am through to nearly 3pm and had seen all the bad weather. The Captain said that all the people that had gone over the top and carried on were heroes and had earned his total respect. He said that at some points there were hailstones and the wind was so strong that it was difficult to stand. 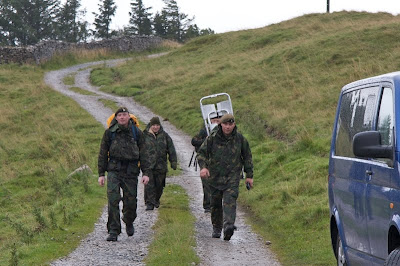 Shortly after the army came down we packed the checkpoint back up into the van and got taken back to Clapham. The next photo is the finishing point at the New Inn which I guess was a welcome sight for many people. 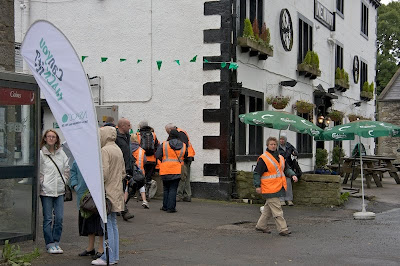 A quick shot of the sun shining on the church with the heavy clouds still in the background. 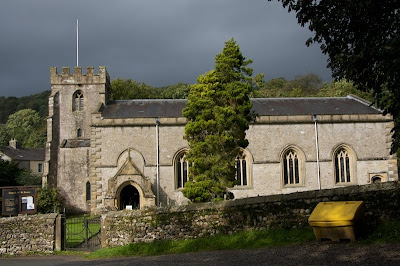 I walked back up the course to try and meet up with Ginny although it was still quite early so I hung about at one of the marshalling points and encouraged the walkers on their last stretch. We were just a quarter of a mile from Clapham and these two were quite pleased to have got here. 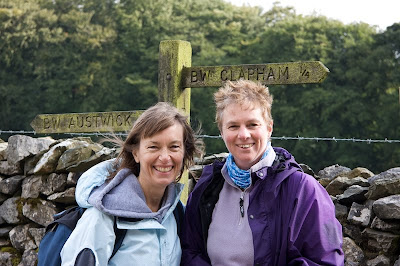 The weather was improving by the minute and here are two of the trio that were in front of Ginny near the start. They must have lost the girl somewhere, maybe she had dropped out, but they were happy and looking very well. 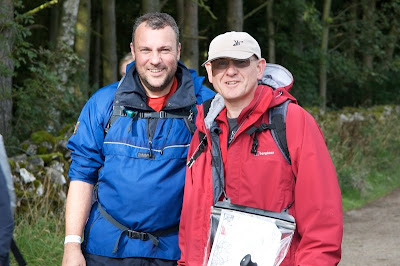 After a long while I thought I'd better go back to the finish in case Ginny had come back on a bus and was waiting for me. Unfortunately I set off about 10 minutes too early to see her arrive at the marshalling point where I had been waiting. I had stopped to talk to a few people on the way down including a big bloke who thought that the weather on Ingleborough had put him back about an hour.

When I got back to the finish there was still no sign of Ginny, then all of a sudden she was there coming into the finish. It turns out that the big bloke I'd been talking to had just overtaken her on the way down from the marshalling point where I had been waiting. Anyhow she was here now, she'd completed the 25 miles and I'm so proud of her. She didn't want her photo taking but here's her certificate. 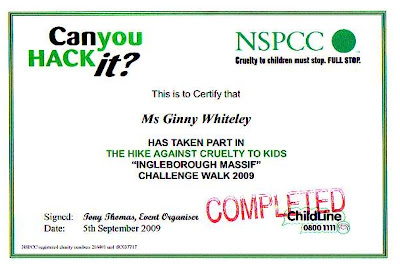 If you want to donate there still time at http://www.justgiving.com/ginny-walks-the-dales/. Thank you in anticipation.
at September 07, 2009