After leaving the bird park we headed off towards Honfluer where we were stopping for a couple of nights. We took the coast road rather than a direct route and stopped off for a break on the way. The problem is that I can't remember where we stopped but it was quite a small fishing village. We watched the sea anglers bringing in their catch and having their boats towed up the beach behind a selection of very old tractors. Their catch was weighed by some officials before selling the fish directly to the locals who were flocking around their boats. A bit of a cock up on the photography front here, I remembered to take a spare memory card with me but I didn't pick up a battery so unfortunately no photos from here.

We had to go through Le Havre which was a nightmare because half of the city centre roads were being dug up. Finally got through Le Havre but somehow managed to miss the Pont de Normandie which would have taken us straight into Honfluer, so we ended taking a long detour down to the next bridge over the river.

Finally got to Honfluer and booked into probably the most utilitarian hotel I've ever stayed in. The room was barely big enough to get the bed into it and the toilet, sink and shower were crammed into an area somewhat smaller than our downstairs cloakroom. But it was a great hotel, the room was clean and comfortable and breakfast was cheap, good and plentiful. Went out for dinner at a nearby Creperie which had the slowest service in the world and then off to bed.

In the morning we went to the old part of Honfluer which was very beautiful. This first photo is a strange water feature at the front of a church which seemed to have a shelter down both sides. I'm sure there is some explanation for this but I couldn't figure it out. 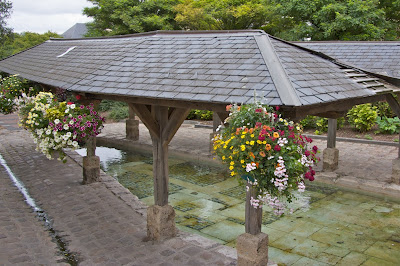 Down in the port area was really beautiful with all the boats in the harbour and the amazingly tall narrow buildings around the edge. Some of them had as many as eight floors and each one was completely different to the one next to it. It made me wonder how on earth they had been built because each one seemed to lean onto the next and I don't think that any of them could have stood up on their own. 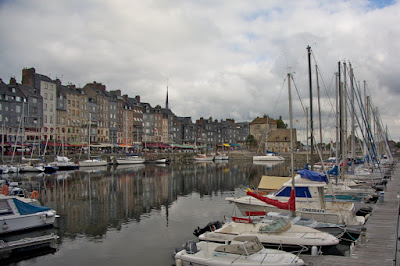 After a while I figured out that the buildings at each end were shorter so I suspect that they started at one end then got bigger towards the middle and then back to shorter at the other end. I also think that some of the buildings had had extra floors added to them over the years because they were a different design at the top than at the bottom. 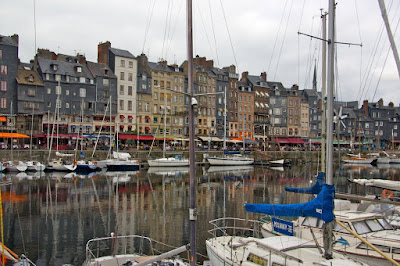 Most of them had restaurants on the ground floor and the one with the dark red canopies in this photograph is where we had our dinner this evening. It was my birthday so we had a nice starter, steak and lots to drink. But that was much later. 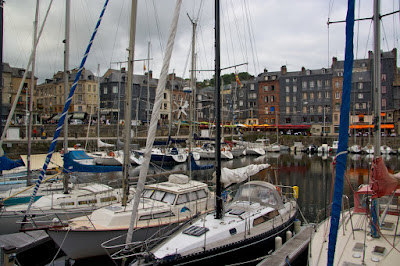 We carried on looking around the town and I was impressed by this painted tarpaulin that was covering the front of this building that was being renovated. The 'door' of the florist had a big zip where the workmen went in and out. At the end of the dock was this pretty little carousel. As you can see it was still quite cloudy but it was beginning to feel a bit warmer than when we first arrived in France. 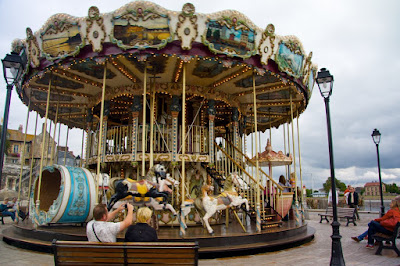 Away from the harbour was a little park with this sweet little fountain ... 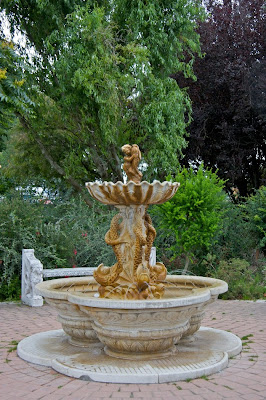 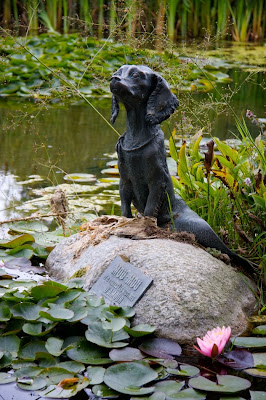 After lunch we decided to have a drive along the coast and went to a place called Trouville sur Mer where we thought we'd have another look at the seaside before we head inland the next day. The beach was fairly unremarkable so I didn't actually take any photos of it at all. However I was struck by some of the buildings in the town, very different to Honfluer and a strange mixture of styles. I'm not sure why I like this building, it just caught my eye and I had to photograph it. 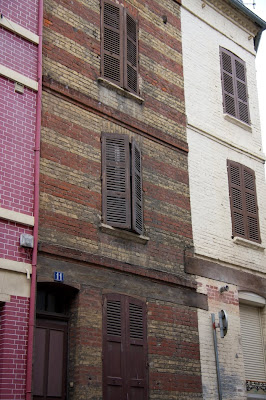 This next building was at the end of a fairly normal looking street where the owners had really gone overboard in making their home into a castle. It looked as if they'd started off by facing the original house with the rough stone with the red brick lines to make it look different to next door. The bars on the ground floor windows and the little balcony on the first floor window are quite cute. Then it all went bizarre, they added an extension that was several times bigger than the original house with towers, gargoyles, balconies etc. There's even a pretend drawbridge on the left. 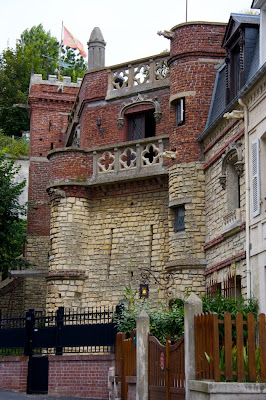 This was a quaint house, again it was at the end of a normal looking street but this time not very strange at all. 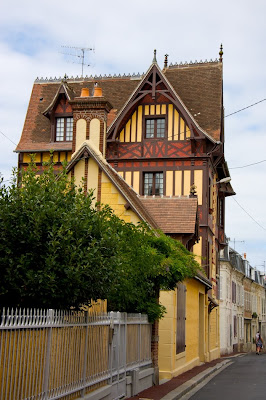 The next building that took my fancy was this pretty little church on the corner between two roads. 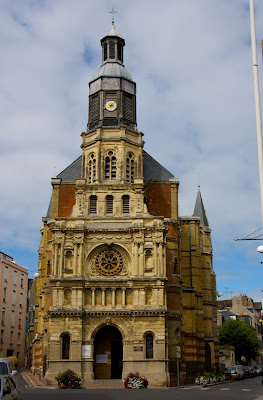 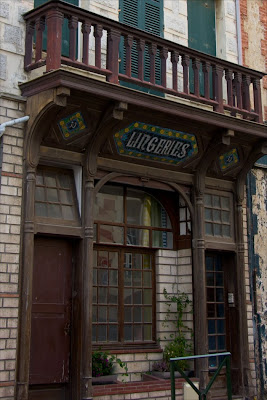 A couple of doors along from the lingeries was this derelict looking antique store. I'm guessing it's been abandoned for some time and the building next to it looked pretty deserted too. 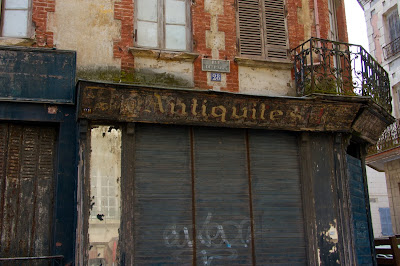 And in complete contrast is this wonderful hotel. This is actually the rear of the hotel and the front looks out onto the sea but I really do love everything about this view of the hotel. Starting with the overall shape being so haphazzard with all the bits of roof and gable ends all over the place. The central chimney has fantastic brickwork and ironwork, then the main building with its wooden framework and the brickwork between. There is so much detail in all the wooden bits around and between the windows and then the colours of the paint are truly sumptuous. What more can I say? 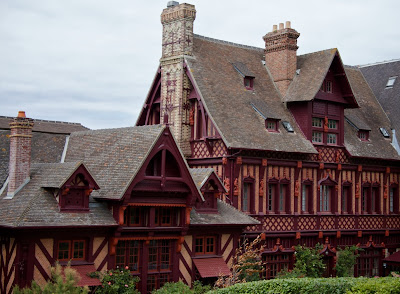 After looking around Trouville it was back to Honfluer for dinner and then tomorrow it's on to Fougeres.
at September 03, 2009

Love the houses! My fave is the pseudo castle! I'd do that!!!