When we left Fougeres we headed South East, through Angers and on towards Doue-la-Fontaine. The gite is at a little place called Les Forneaux (6 miles East of Doue) which comprises of the gite, the owners house next door, a big house across the road and a little farm up the lane. There is also the remains of a bigger farm and outbuildings next to the big house but that has been deserted for many years. We have been to this gite before two years ago but it rained most of the time so we didn't get out much. It didn't matter too much as we'd come for a rest so ended up watching a lot of the videos that the owners have left here.

It's quite a small gite with just one bedroom, a lounge, a kitchen and a bathroom but all the rooms are fairly large and comfortable. There is a small pool between the gite and the owners house, but the owners weren't there so we had it to ourselves. To the front of the gite is a large parking area which was ideal for playing boules. Around the back is a big grassed area with fruit trees and also a field which the farmer uses. 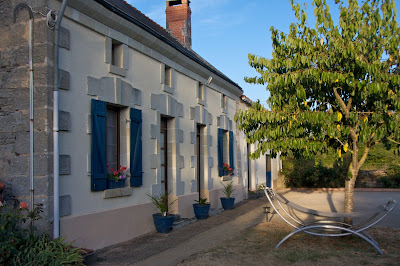 This next photo shows the outdoor dining/play area in the lean to on the owners house. We ate all our meals out here and there is a barbecue where I cooked all of the meat. There a little pool table/table football game but we didn't try that, and also a dartboard where Lynne regularly thrashed me at 501. 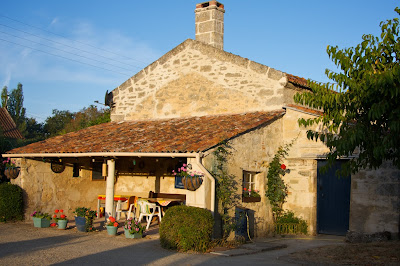 The week here was very peaceful and very hot. We only made a couple of trips out and I'll write posts for those separately, so most of the time we were around the pool. Sometimes we had to go inside to hide from the sun and stop ourselves getting roasted. I don't know how accurate the temperature gauge was in the garden but on a couple of days it got above 35. When we next had a wifi connection I looked on Babelfish for a translation of Les Forneaux and it came back with 'Furnace', well it was hot enough I guess. 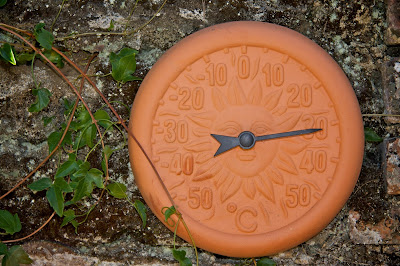 On one of the hot days this dragon fly decided to take a dip in the pool. Lynne managed to fish it out but it wasn't too happy and it just withered and died. I guess it must have been the chemicals in the pool water. 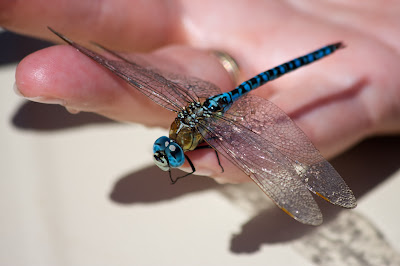 There were a few nice plants in the garden and I liked how the curly bits in the middle of these flowers made shadows on the petals. 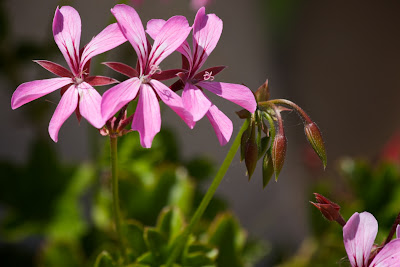 The sky was very clear at night and the lack of light pollution made it possible to see and incredible number of stars. The night we arrived at the gite it was a new moon so there wasn't even any light from the moon to spoil the view of the stars. This image is best viewed at full size (click on the image to see it bigger). 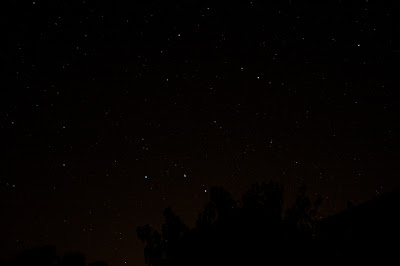 One night (well very early in the morning really) I was experimenting with long exposures times to get some star trails. This image had an exposure just short of seven minutes. The yellow light on the tree and building was from the bedroom and I thought it just added a bit of interest to the picture. I was quite amazed how the stars were all different colours. I guess the long exposure intensifies the colour so you see blues and yellows and orangey reds. I'm not sure if you will be able to see on this image but there is a very faint shooting star trail from near the top right of the frame down to just next to the chimney. Sitting out at night there were lots of shooting stars every few minutes so I was lucky to catch one. 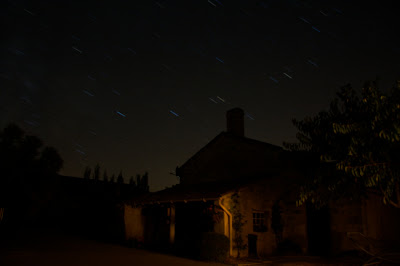 One day we went for a walk around from the gite to have a look at the local area. We had cycles to Saint George sur Layon earlier in the week but that was quite a painful experience that we didn't want to repeat (I don't remember saddles being so hard when I was younger). We had a look at the derelict farm near the gite and considered whether t could be renovated. The roof looked in good nick but unfortunately there was a couple of major cracks down the front wall so we suspected it might be too far gone. 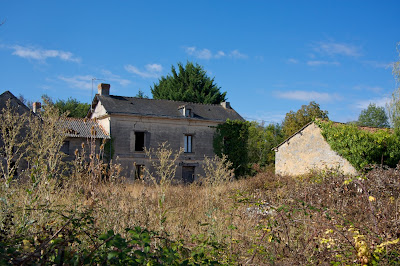 Around the side of the main farm house was a smaller place which looked in much better condition but was probably too small. You might just be able to make out an old tractor burried by the weeds in front of the porch. 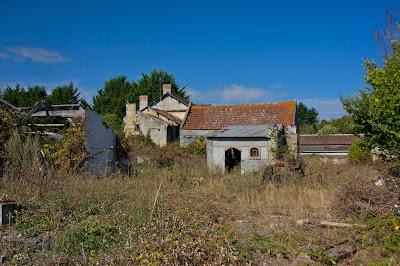 There was a massive old barn next to the farm and we spotted this old school bus and what could have been an American car inside it. There looked to be some old chicken feeders in the barn so we guessed it must have been a chicken farm. 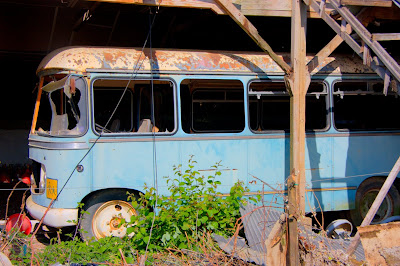 Along the road there were lots of fields of corn and some of them had been partially harvested. We wondered how they got the sweetcorn off of the plants and whether they went to be tinned as nibblets or if they were sold as corn on the cob in the markets. 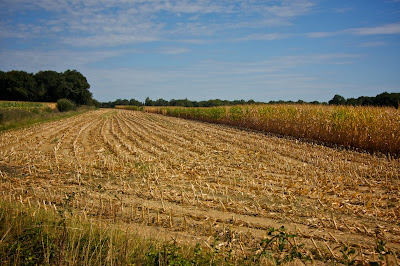 In another field further around the walk we found the answer. They chop them up and make them into feed for the cattle. This harvester was quite impressive. There were either three or four tractor and trailers continually relaying the feed back to clamps back on the farm about half a mile (800 metres) down the road. 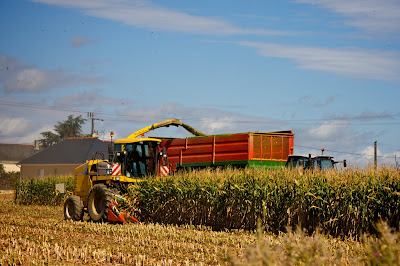 A bit further along was this beautiful farm house with a moat around it. The lovely building in the foreground with the arched windows was the garage. Now this looked like a nice place to live although you'd have to get used to the tractors hurtling past during harvest time. 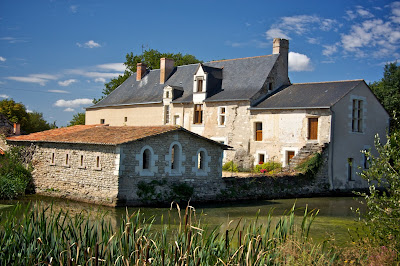 Most of the cows on the farm were inside an enormous barn but there was a couple of dozen out in the fields. I quite like the trees in this field too. I don't know what sort of trees they were but they had very silvery leaves compared to the trees in the background and were almost cloud shaped like those in the sky above. 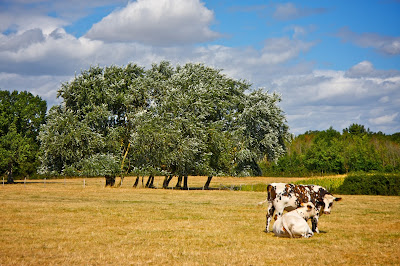 We walked further around and could see St George sur Layon on the distance. This last image is a small barn that was on a small holding not too far from the gite. I love the way the barn walls appear to be made of a load of old sticks held on by slightly thicker sticks. I'm not thinking that it keeps much of the winter weather out of the barn. 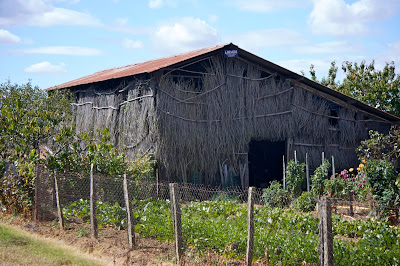