The Zoo at Doue la Fontaine

On the Monday after the balloon race and evening extravaganza at Brissac we had a thunderstorm in the morning. We had planned to go to the zoo on Tuesday and we were worried that the heatwave was over but on Monday afternoon it was as sunny and warm as before. So on Tuesday morning it was a bit overcast but we decided to go to the zoo anyway and hoped it would warm up as the day went on. The last time we came to the gite two years ago it had rained almost non-stop so we never got to the zoo then.

On the way to the zoo we went on part of the ring road around Doue which was a piece of fast duel carriageway. On the fence, right next to the road, we spotted an enormous hunting bird just sat there watching the traffic. The road was quiet so I slowed down as we went past it. I'm guessing it was a buzzard, but the size of it, I wouldn't have been surprised if it wasn't an eagle. I very nearly stopped to take a photo but I wasn't sure how the French police would take me stopping on what was effectively a motorway.

When we arrived at the zoo it was a little cool, very overcast and there was a sprinkling of rain on the breeze. We still tried to find a tree to park the car beneath because we thought it might be hot by the time we came out, and we were correct.

The zoo is fairly unique as it is on the site of an old troglodyte village and an abandoned quarry. So in addition to the animals there are quite a lot of exhibits about the troglodyte way of life and also about the quarrying industry. A lot of the animal enclosures utilised the old troglodyte cave dwellings where the animals could shelter from the rain or sun. In the quarry part of the zoo there were two massive areas which had nets over the top where the birds were allowed to fly freely and also the larger animals had big areas to roam. It's not one of the biggest zoos that I have visited but the few animals have large enclosures and all seem very well looked after.

Unfortunately I didn't make any notes about the birds and animals that we saw so no guarantees of any accuracy. I think this first photo are a couple of pelicans. There were quite a few of them huddled together, I guess it might still have been a bit cool for them. 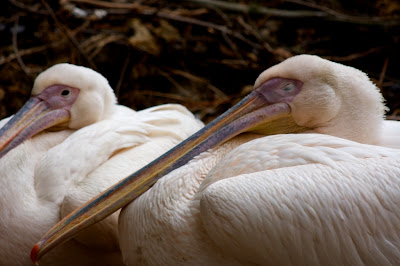 This leopard was walking along an old log and I felt it was eying me up as a potential for its next meal. Fortunately there was a layer of thick glass in front of it so it couldn't get to me. I got up very close to the glass to cut out any reflections of the people looking into the cage. 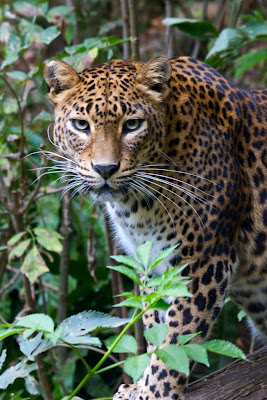 There was a whole host of flamingos in this pool in one of the quarry areas but I like this image where I caught a couple on the edge of the group. 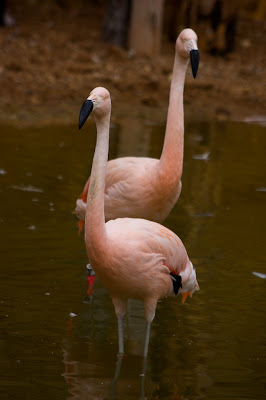 Within the area where the flamingos were there was a load of different ducks. Here there was a bit of a step in the water where all the ducks had lined up. 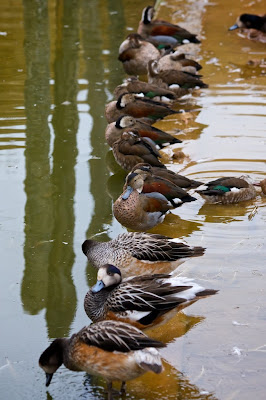 There was a couple of these bright blue parrots sat on top of poles where you get could get up very close. Unfortunately I didn't get a decent shot where it had its eye open. 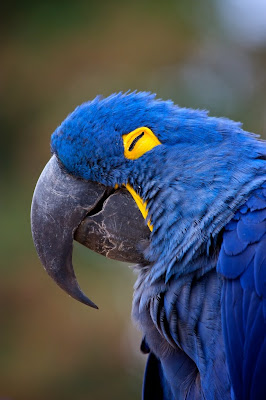 I had taken some good photos of this parrot when we first reached this first bird area (I think it was mainly South American birds). As we went back towards the exit I noticed that the parrot had got a feather from somewhere and was intent on chewing on it. Again I didn't get a good shot where it had its eyes open but I still like this one. 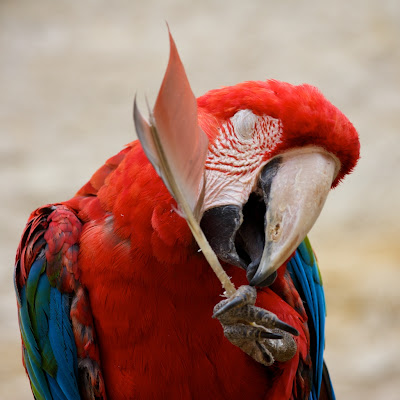 In the second bird area (which I think is African birds) one of the fist birds we saw was sat on a post right next to the pathway. It had turned around a few times and seemed totally unconcerned about the people going past only inches from it. In this photo it seemed to be posing specially for me and I think this was my shot of the day. I had the focus perfect on the birds eye and the level of detail on the plumage and beak is amazing, especially at full size. I'm thinking of making an A3 glossy print of this for my study wall. 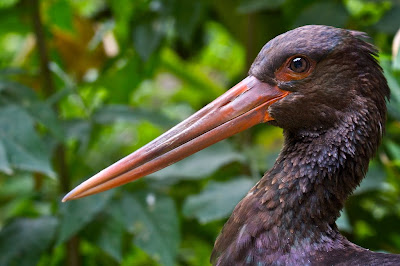 Away from the birds for a while, here is an image of a baby tapir (I think). There were a few adult tapir wandering about but the baby was running around like a maniac. I got a few blurred shots of it but just managed to get this one where it had stopped for a fraction of a second. 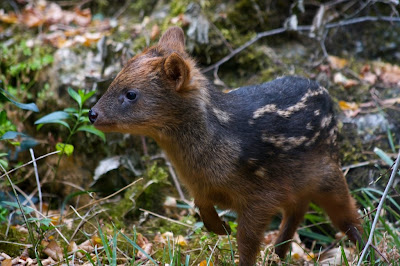 In the vulture enclosure they had quite a variety of different types of vultures and the one thing they had in common was they all had their backs to us. The one exception was this one stood quite near the back in the shadows. There wasn't actually anything stopping us moving off the main path and much closer to them, except of course they were very big and looked pretty mean. Perhaps with a bit more courage I could have got a better shot, or I could have been eaten. 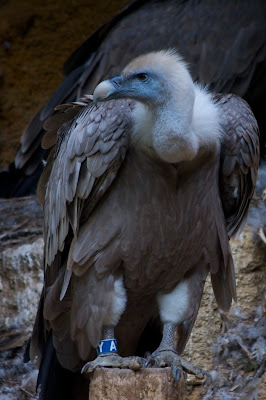 I can't remember what type of monkeys these are but like the baby tapir they spent most of the time running around. To of them stopped for a moment on top of this post and I managed a reasonable shot. 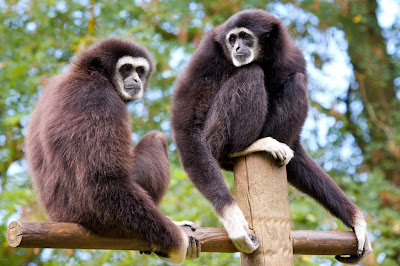 It was getting quite a bit brighter by now as it approached midday. This meant I could use a faster shutter speed to get this monkey in mid swing. 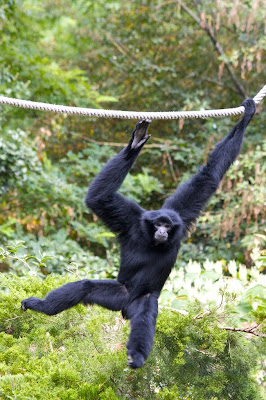 The rhino enclosure was an enormous quarry area where there were just a couple of rhinos, a few of antelopes, some turkeys and what looked like black and white geese. It was all very spread out and the rhinos never came very close to the pathway. 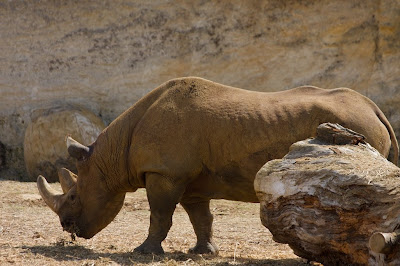 The lioness was giving her paw a good wash with that big, pink tongue. Shortly after I took this photo she started to roll around in the dust and looked to be having fun. 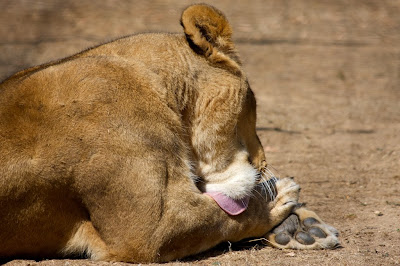 Near to the exit of the zoo was the giraffe and zebras, again in quite a big quarry area. This young giraffe came into the main area through this big tunnel in the rock. I like this photo because the adult giraffes neck is making a shape that rhymes the shape of the tunnel. However there's something about this image that isn't right and I don't know what it is. I know focus on the adult giraffe is a bit soft but it's not that. Maybe I'll figure it out what's bugging me and then I can have a go at fixing it. 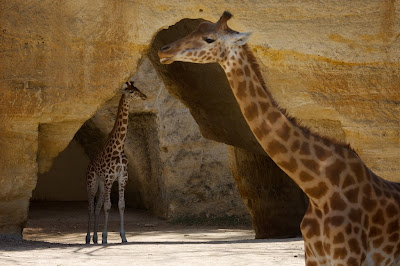 The final image. I love this close up of the giraffe trying to take this dead leaf from the childs hand. As with the previous image, there's something not right and I think it's because the background is too light on this one. I might have a go at darkening the background and lightening the giraffe and the hand to see if that looks better. 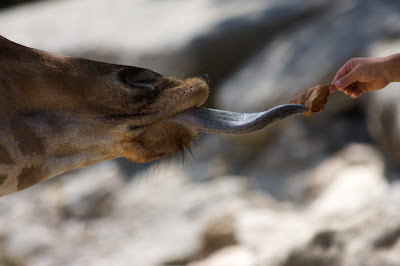 In the next post we leave the gite and go to Les Andelys
at September 24, 2009