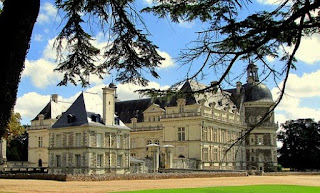 This morning was the first morning when the sky was clear blue rather than cloudy or misty. However the clear night meant that it was quite cool first thing. We went to Chateau de Serrant in the morning which was very good. We had a guided tour in French but we did have most of the blurb in a folder in English. There was some amazing stuff inside the chateau but we weren't allowed to take any photos. In the kitchen there was lots of brass pans and some lovely china. The guide was asking us to recognise some odd kitchen implements but we couldn't understand what the people were saying. The bedrooms were very interesting and there is an amazing library with some massive books and also some games tables. Some of the rooms had the walls covered with tapestries with some incredibly detailed and strange scenes on them. There wasn't a lot to see outside of the building except the building itself and the lake and moat around it. At some chateaux there are extensive formal gardens but there was nothing like that here.
After the chateau visit we had a crepe at the nearby town St. George sur Loire and then went on to see the abbey town of St. Florent le Vieil. The abbey church was lovely but the abbey itself had mostly disappeared. There was an exhibition of some things from the original abbey in the crypt of the church. We went down to a path along the edge of the Loire and went for a bit of a walk which was very pleasant. There were lots of people fishing and the path was very busy with cyclists.
at August 24, 2010