I've been having problems with my camera batteries recently with them going flat very quickly.  I have three batteries, the original one from when I bought the camera and a couple of cheapo ones from 7dayshop.  The thing is I'm not very organised with charging them up and keeping track of which ones are fully charged so I wasn't too sure if I had a problem or not.  Anyhow yesterday (Sunday) I was sure that the original battery was dead so it went in the bin and I put one of the others in the camera and went out for a walk with the dog.  Guess what, the battery that I put in the camera was also a bit dud so as soon I took the first half dozen shots the battery icon on the camera started to flash and of course I hadn't stuck the other one in my pocket.

So you may think this was a very bad thing, but I'm not sure it was because I had to change the way I worked.  I switched off the camera when I wasn't using it, normally it's always switched on a ready to fire off a blast of shots.  I framed my shots carefully, looking a a few different angles before committing to the shot I wanted and switching the camera back on.  I only took a couple of shots for each composition rather than blasting off half a dozen at a time.  I used only my 50mm prime so there was no zooming back and forth and no image stabiliser draining the battery.  Then when I got home I just had a couple of dozen images rather than a couple of hundred and almost half of them are worth posting instead of 4 or 5 percent.  See what you think.
This first image of the weed was my second attempt because in my first attempt the depth of field was far too narrow and only a small part of the flower head was in focus.  The 50mm lens goes as wide as f1.8 which is what I started at, but then I stopped down to f3.5 for this shot.  The other weeds in the background are well out of focus which simplifies the image very well. The main problem with this shot was the light colour in the background at the top of the frame which gives far too much weight to that area.  I couldn't get high enough to fill the background with the other weeds, maybe I should clone some weeds into the top area to darken it down. 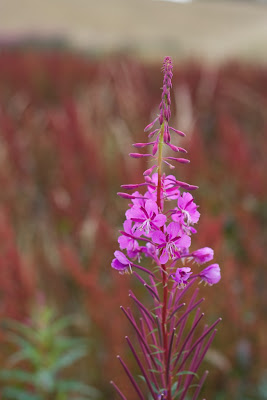 The next three shots where the one time I fired off a few shots in a row.  A bit opportunist as the bee was emerging from the flower and then flying off. 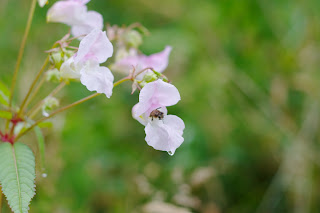 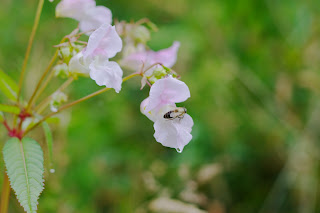 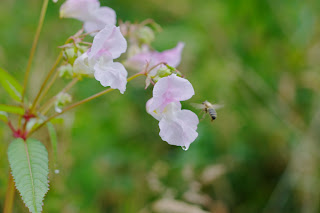 The next image is the same sort of weed but these ones had far richer colour than the ones with the bee.  I spent a bit more time composing this shot and tried to get some more of the flowers in the background.  I think I needed even more depth of field on this shot as the flower on the left of the three is pretty soft. 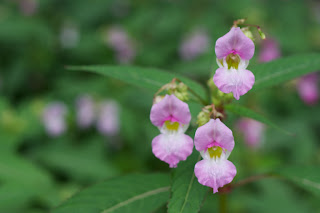 The last of the weeds was a bush with these tiny white flowers.  Each of the little flowers seemed to be at a slightly different stage of development which makes them quite interesting to look closely into.  I was also intrigued by the bits that look like snow flakes, what are they I wonder. 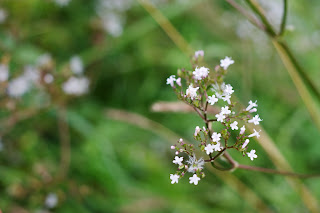 All of these photos where taken from around Scout Dyke reservoir although there's no sign of water in any of them.  Around the reservoir there are several farms and in some of the fields the grain crops are getting close to harvest time.  The next two shots are the edges of corn fields where I'm trying to show lots of detail of the heads of the corn.  They look to be two different varieties with the first ones being short and fat whereas the second are longer, thinner and a darker colour.  Maybe they are just a slightly different stages of the growing cycle. 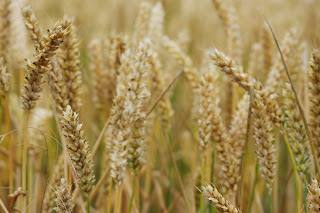 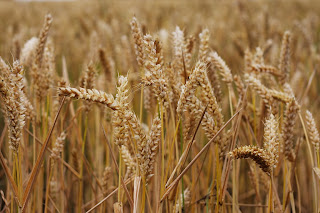 The final two photographs are at the edge of a barley field. In the first shot I have gone close up in the same way as the corn fields but in the second I am shooting higher up and getting more of the field in the background.  There are almost lines across the field as it stretches back into the distance. 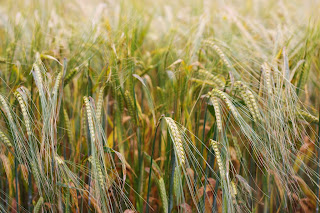 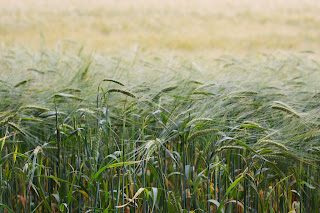 In conclusion, I guess it was a good exercise to limit myself to the number of shots I could take on a trip out and I think the resulting images are better than my average.  I have to admit I didn't really like having a limit put on the number of shots I could take and I have ordered a couple of new batteries which I hope will arrive before I go on holiday.  In the future I think I will try to take less shots and take more care with composition but then again old habits die hard so we shall see.
at August 09, 2010